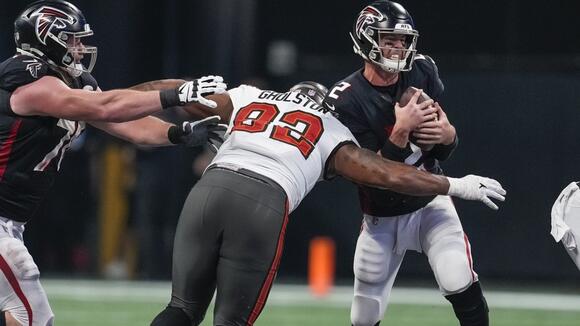 The long injury report in Tampa Bay gets longer just about every week, even as some players make their way back into the lineup.

Cornerback Jamel Dean is currently in the concussion protocol after exiting the Atlanta Falcons game this past weekend, according to head coach Bruce Arians. Defensive lineman William Gholson is dealing with a patellar tendon injury as well, suffered near the end of Sunday's victory.

"[Dean] looks like he's in pretty good shape so hopefully we can get him out of the protocol by Sunday," Arians said on Monday. "[I] don't know how serious [Gholston's injury is] going to be. I've got to see a couple days worth of treatment. Hopefully, we didn't lose anybody for this next ballgame."

Dean has dealt with numerous injuries this season, including shoulder and knee ailments, but has only missed one game as a result and has performed very well when he's been on the field. In 11 appearances, Dean has tallied 41 tackles, one tackle for loss, two interceptions and eight defended passes.

The Week 14 injury report will be worth monitoring as Dean, Gholston, and other contributors recover from the injuries.

The Buccaneers will need Tom Brady healthy if they hope to stack up some wins in the weeks to come.
TAMPA, FL・18 HOURS AGO
BucsGameday

While he may be a favorite for Tom Brady, the Tampa Bay Buccaneers speedster may be running out of lives.
TAMPA, FL・2 DAYS AGO
BucsGameday

This could pose a distraction for the Buccaneers.
TAMPA, FL・14 HOURS AGO
BucsGameday

Progress Report: Which Buccaneers are Making the Grade Through One Quarter?

A 2-2 start hasn't been the greatest representation of the Tampa Bay Buccaneers' potential, but there are plenty of signs more winning is on the horizon.
TAMPA, FL・12 HOURS AGO

The Buccaneers drop back-to-back home games in their week 4 loss to the Kansas City Chiefs.
TAMPA, FL・2 DAYS AGO
BucsGameday

Tampa Bay will have to weigh all options with the possibility of Tom Brady retiring again this offseason.
TAMPA, FL・12 HOURS AGO
WBEN 930AM

After Arizona Cardinals star JJ Watt disclosed he was treated for atrial fibrillation, we’re taking a look at how it can happen, and how it can be treated.
NFL・25 MINUTES AGO