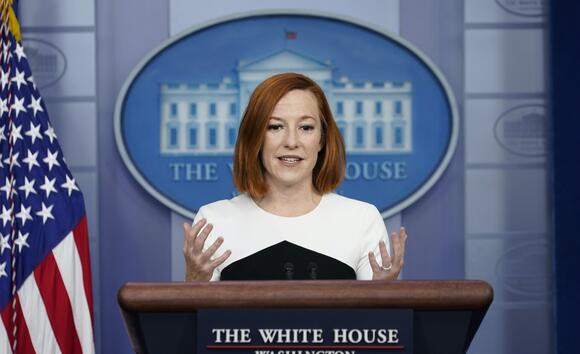 White House press secretary Jen Psaki sidestepped a question about the authenticity of Hunter Biden’s laptop, which he had previously dismissed as Russian disinformation, during Monday’s briefing.

A reporter asked Psaki a two-point question about President Joe Biden’s son, and the top White House spokeswoman refused to get into an exchange about the controversial laptop.

Psaki told the reporter she has “neither the time nor interest in exploring or reading” a book on the subject of Hunter Biden’s laptop in reference to the question about its authenticity.

The laptop contained emails discussing business deals with China and Ukraine, raising questions about whether Hunter Biden was cashing in on his father’s name in international trouble spots.

Psaki joined a number of Biden associates in denouncing the emails as a Russian disinformation campaign, similar to the distribution of Hillary Clinton’s emails during the 2016 campaign. Social media sites and some news outlets responded by suppressing coverage of the emails. Hunter Biden’s business activities in Ukraine also featured prominently in former President Donald Trump’s first impeachment.

The younger Biden has since been the subject of a Justice Department investigation.

In September, after additional reporting on Hunter Biden’s laptop, Psaki appeared to stick to this line as White House press secretary. “I think it’s broadly known and widely known that there was a broad range of Russian disinformation back in 2020,” she said in response to a question on the subject.

Psaki was asked again about whether the Hunter Biden laptop was Russian disinformation at Monday’s press briefing by New York Post reporter Steven Nelson, who referenced colleague Miranda Devine’s book about the controversy, The Laptop from Hell: Hunter Biden, Big Tech, and the Dirty Secrets the President Tried to Hide . The New York Post reported on the laptop’s contents during the campaign between Biden and Trump.

Psaki was dismissive of the question and the book. She referred a query about Hunter Biden’s business dealings to his representatives, saying he did not work for the federal government.

Does this surprise anyone? Why would this inept administration want to tell it’s USA Citizens the truth. It’s seems that the DEMORATS are immune from telling the truth.

lol Fire crouch room temperature IQ did not get those questions cleared before she stepped up there again! You can see the " I just pumped the neighbors cat look" on her face when she does not have a response lol 😂🎪

Funny they had no problems asking about the Trump kids during the Trump administration. But don't ask anything about Bidens off spring.

As Gov. Glenn Youngkin promised a "new day" in Virginia, former President Donald Trump was in a small prison town in Arizona relitigating the past.
POTUS・1 DAY AGO
WashingtonExaminer

The Biden Justice Department moved to block a subpoena to depose former President Donald Trump sent by Peter Strzok, who sued the FBI for wrongful termination from his role as special agent after the emergence of his anti-Trump texts.
WASHINGTON, DC・1 DAY AGO
WashingtonExaminer

President Joe Biden's New Year's resolution to focus on the 2022 midterm elections will not be universally welcomed by Democratic candidates as the party tries to buck history and hold on to congressional power.
PRESIDENTIAL ELECTION・1 DAY AGO
Newsweek

The Constitution, kids in schools, safe streets and a secure border were among the things the House Republican leader said the GOP stood for.
PRESIDENTIAL ELECTION・21 HOURS AGO

On Sunday the GOP lawmaker was asked about a proposed plan shared in the Trump White House to seize voting machines after the 2020 election.
CONGRESS & COURTS・16 HOURS AGO
Florida Phoenix

Quality Journalism for Critical Times About halfway through his marathon news conference last week, President Joe Biden finally asked the only question in Washington that’s worth asking. With congressional Republicans standing in the way of the Democrats’ every initiative, including voting rights (which should be as bipartisan as it gets), what do they actually support? “What are Republicans for? What […] The post In Year Two, no more Mr. Nice Biden, please appeared first on Florida Phoenix.
U.S. POLITICS・18 HOURS AGO
Newsweek

Most analysts believe Republicans are well-positioned to take back control of the House in the midterms.
CONGRESS & COURTS・2 DAYS AGO
Newsweek

Experts say the House committee investigating the Capitol riot has hundreds of pages of documents and more potential testimonies that can prove to be explosive.
POTUS・2 DAYS AGO

"He will be helpful in winning back House seats," she said Sunday, but predicted "there starts to be a break" after the midterms.
PRESIDENTIAL ELECTION・19 HOURS AGO
The Independent

Donald Trump Jr posts strange rant: ‘Joe Biden is what stands between us and nuclear-capable China’

Donald Trump Jr released a seemingly odd rant against Joe Biden, leading to a pushback from critics.A nearly 5-minute video was uploaded by the businessman titled “Pathetic: Biden can’t read a teleprompter!” on Facebook on Friday. It has been viewed more than 380,000 times.“You know what, can’t put Joe Biden in the same room with someone, he might let one rip. Guys… Joe Biden… is what stands between us and… a nuclear capable China. Joe Biden is the guy they’re gonna call at three in the morning… if there’s a serious crisis… with Russia,” Mr Trump can be heard...
PRESIDENTIAL ELECTION・1 HOUR AGO
Fox News

White House press secretary Jen Psaki was confronted Friday over President Biden's dismissal of a question about the Russia-Ukraine conflict as "stupid," saying he did in fact not dismiss the idea of "proactive deterrence." Biden was caught on a hot mic muttering "what a stupid question" after Fox News correspondent...
PRESIDENTIAL ELECTION・2 DAYS AGO

Liz Cheney among those to condemn remarks by former House speaker as committee member Zoe Lofgren says: ‘I think Newt has really lost it’
CONGRESS & COURTS・2 HOURS AGO
Newsweek

Donald Trump has been compared to Jeb Bush, who also went viral over a similar occurrence in 2016, on social media.
POTUS・3 HOURS AGO
Newsweek

"Black people voting is simply not a priority for Biden, Manchin or Sinema," the radio host said on his Thursday broadcast.
PRESIDENTIAL ELECTION・2 DAYS AGO
Newsweek

Pence has previously said that the decision in Roe v. Wade should be thrown on "the ash heap of history."
PRESIDENTIAL ELECTION・1 DAY AGO
NewsRadio 740 KTRH

The technology was complicated, but the plan was simple: Scan mail-in and absentee ballots in populous Maricopa County, remove the “invalid votes,” and recertify the state’s 2020 election count, surely declaring then-President Donald Trump the rightful winner. This scheme to subvert the election outcome in Arizona is laid out in newly released emails obtained by Rolling Stone. Sent in early December 2020, the emails cover a critical moment when the post-election push by Trump and Republican allies to find fraud and overturn the presidential election was in full swing. The emails show how a group of fringe election sleuths pressed state legislators...
ARIZONA STATE・13 HOURS AGO
The Guardian

Romney, Cheney and others were hailed as the conscience of the party but their deeds in the Senate have provoked accusations of hypocrisy
PRESIDENTIAL ELECTION・2 DAYS AGO
The Guardian