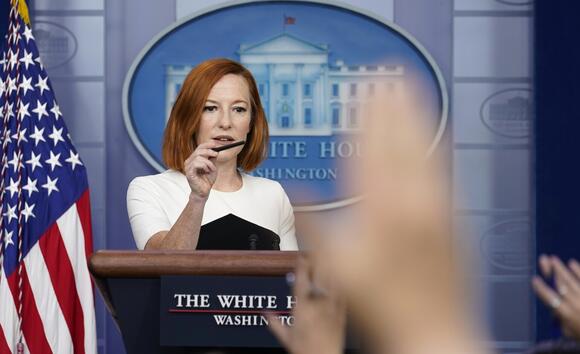 T he Biden administration has been dealing with a major crime spike in 2021, and White House press secretary Jen Psaki says the president is ready to outspend his predecessor in pursuit of a solution.

Violent crime is one of many issues facing the Biden administration, which has blamed the problem on the pandemic and widespread gun ownership.

High-profile crimes include not only waves of retail theft, such as coordinated efforts with dozens of perpetrators looting a single store, but spiking murder rates in major cities across the country.

"This is sort of similar to the crime spike that we saw over the summer, and one of the president's biggest pushes to address that was the Department of Justice strike teams that were sent out to five cities," a reporter said during Monday's briefing. "Since those strike forces were assembled in July, have they accomplished anything?"

Psaki responded that the strike forces were sent to address gun violence specifically, pointed to a $139 million grant program that will hire more than 1,000 officers across the country, and again said the pandemic is a cause for the problem.

"We know that we've seen over the course of time — we'll let other people determine what the cause and effect is — we know we've seen an increase in crime over the course of the pandemic," she said. "What the president has been focused on doing is working to ensure there's funding to support local cops, to support local jurisdictions, to ensure that law enforcement at the federal level is a partner both in the short and long term to address either these spikes in crime or gun violence."

The president's budget includes "an increase, significantly," over what former Trump proposed during his term in office, Psaki added.

well thats what happens Biden opens border. defunds police crimes go up then Biden spends more money to police to fix what he has broken and he is still in office I have one question why isn't he that is Biden not in jail

This administration wants to take credit every time one of their harebrained schemes needs fixing. First, we defund the police then we brag when we give $$ back...

Members of Congress are weighing in on the increasing military threat Russia poses to Ukraine, with some demanding sanctions to deter Russian President Vladimir Putin and others seeking information from the Biden administration or steps to secure the region.
FOREIGN POLICY・9 HOURS AGO
WashingtonExaminer

President Joe Biden is reviewing plans to deploy thousands of troops and military equipment to fellow NATO nations ahead of a potential Russian invasion of Ukraine.
MILITARY・11 HOURS AGO
WashingtonExaminer

With President Joe Biden’s first year behind him and the approaching midterm elections coming into clearer focus, an NBC News poll offered a dismal outlook for Democrats while suggesting Biden’s lost political identity paves the way for a shellacking in November.
PRESIDENTIAL ELECTION・17 HOURS AGO
Newsweek

"This November is about one thing: It's impeaching Joe Biden to stop this madness and to stop this illegitimate regime from destroying our nation," said Bannon.
PRESIDENTIAL ELECTION・13 HOURS AGO

Adam Laxalt isn’t overpromising. The Nevada Republican, his party’s leading candidate for Senate in the Silver State, offered a modest menu of agenda items he plans to pursue should the GOP win a majority of seats in the chamber in the midterm elections. Topping the list? Using control of the floor, and key Senate committees, to conduct aggressive oversight of President Joe Biden and his administration. Laxalt also would encourage the Republican majority he hopes to usher in to look deeper into the Russia investigation that consumed Washington during most of former President Donald Trump’s term.
PRESIDENTIAL ELECTION・20 HOURS AGO
Newsweek

The controversial remark came after Doocy asked the president if inflation will be a "political liability in the midterms."
PRESIDENTIAL ELECTION・7 HOURS AGO
NewsRadio 740 KTRH

Biden was caught on a hot mic while responding to reporters' shouted questions before they were escorted from the East Room.
PRESIDENTIAL ELECTION・7 HOURS AGO
The Independent

A retired US Army colonel who authored the now-infamous “coup PowerPoint” slide deck played a significant role in instigating the Arizona state senate’s sham “audit” of Maricopa County, Arizona ballots by convincing them that a notorious dot-com era inventor’s untested technology could spot enough fake ballots to undermine Joe Biden’s win in the Copper State. According to documents released by the pro-transparency group American Oversight, Arizona senators who ordered the partisan audit of the state’s most populous county did so on advice from Phil Waldron, a retired US Army colonel who became known for spreading baseless conspiracy theories about...
PRESIDENTIAL ELECTION・14 HOURS AGO
Newsweek

The U.S. Embassy in Kiev has already ordered diplomats' family members out of the country.
FOREIGN POLICY・11 HOURS AGO
The Guardian

There was a moment at the first Trump-Biden debate, on September 29, 2020, in Cleveland, when the contours of the American future were laid bare.
PRESIDENTIAL ELECTION・20 HOURS AGO
Washington Examiner

TRUMP 'DRAFT EXECUTIVE ORDER' CAME FROM OUTSIDE WHITE HOUSE. Last week, I wrote about Resistance excitement over a claim that Republicans "forged" phony Electoral College documents in an attempt to fool the world into thinking President Donald Trump won the 2020 election. It turned out there was much less to the story than met the eye. Now there is another seemingly sensational story about the period when Trump was still in office and refusing to accept the results of the election.
POTUS・16 HOURS AGO
Newsweek

The column called the GOP congressman an "obstructionist" on the 1/6 probe and slammed his "contempt for the truth."
OHIO STATE・2 DAYS AGO
Washington Examiner

If the media treated Biden like they did Trump, Trump would’ve been reelected

New polls released this weekend show terrible numbers for the Biden administration. In one poll, most respondents stated they feel the country is headed in the wrong direction. In another, respondents revealed they would support a candidate other than President Joe Biden if the election were today. The fact that...
PRESIDENTIAL ELECTION・1 DAY AGO

As Gov. Glenn Youngkin promised a "new day" in Virginia, former President Donald Trump was in a small prison town in Arizona relitigating the past.
POTUS・1 DAY AGO
Bangor Daily News

Americans deserve a better choice than Biden or Trump in 2024

The BDN Opinion section operates independently and does not set newsroom policies or contribute to reporting or editing articles elsewhere in the newspaper or on bangordailynews.com. Nolan Finley is editorial page editor at The Detroit News. The more critical I become of Joe Biden’s bumbling presidency, the more often I...
PRESIDENTIAL ELECTION・1 DAY AGO
WashingtonExaminer

President Joe Biden's New Year's resolution to focus on the 2022 midterm elections will not be universally welcomed by Democratic candidates as the party tries to buck history and hold on to congressional power.
PRESIDENTIAL ELECTION・1 DAY AGO
Newsweek