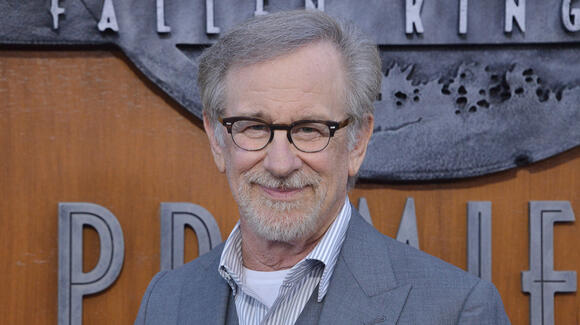 Steven Spielberg ’s coming-of-age drama “ The Fabelmans ,” a movie loosely based on the filmmaker’s childhood, will debut in theaters around next Thanksgiving.

The film, from Universal Pictures and Amblin, has been scheduled to open on Nov. 23, 2022.

Though the release calendar could change before then, “The Fabelmans” is currently slated to premiere on the same day as an untitled animation project from Disney and two weeks after Marvel’s “Black Panther: Wakanda Forever” (Nov. 11).

The semi-autobiographical “The Fabelmans” takes place in Arizona, where Spielberg spent his formative years, and stars Michelle Williams, Seth Rogen, Paul Dano and newcomer Gabriel LaBelle. Plot details have been kept under wraps, but “The Fabelmans” is said to dramatize the developmental experiences of a movie-lover who eventually became the most commercially successful director in modern times. Williams and Dano are expected to play roles inspired by Spielberg’s mother and father, while Rogen’s part is influenced by the director’s favorite uncle. At the center of the film is LaBelle, as aspiring filmmaker named Sammy, with “Once Upon a Time in Hollywood” breakout Julia Butters portraying his sister, Anne.

Spielberg co-wrote the script with his frequent collaborator, “Angels in America” playwright Tony Kushner. The pair recently teamed on “West Side Story,” a big-screen adaptation of the classic musical, to rave reviews. Spielberg and Kushner previously teamed on 2005’s historical action drama “Munich” and 2012’s period piece “Lincoln,” starring Daniel Day-Lewis as the 16th president of the United States of America.

In addition to directing and co-writing, Spielberg is producing “The Fabelmans” with Kushner and Kristie Macosko Krieger. The film began production in July.

From ‘Zombieland’ to Sundance: Jesse Eisenberg on Teaming With Emma Stone for ‘When You Finish Saving the World’

For Jesse Eisenberg’s feature directorial debut, “When You Finish Saving the World,” he crafted a quirky family dramedy about a woman Evelyn (Julianne Moore) and her “oblivious” son Ziggy (Finn Wolfhard) as they struggle to connect. The movie debuted Thursday as an opening day selection for Sundance 2022 nearly one year to the day after Eisenberg sat down with Variety to discuss the Audible originals drama on which this script was based. Joining the Variety Virtual Sundance Studio presented by Audible, the emerging filmmaker looked back on the project’s journey from audio production to A24 release. “I feel so fortunate to have...
MOVIES・2 DAYS AGO
Variety

You can expect to see the next installment of Daniel Craig as Private Detective Benoit Blanc in “Knives Out 2” streaming on Netflix this fall. Variety has learned exclusively that writer and director Rian Johnson’s hotly-anticipated sequel is expected to release in theaters and the streaming platform in the last quarter of 2022. In addition, the film is expected to also make a festival run before its release, although it’s unknown which ones it’s expected to debut at. With this added layer, we can expect the sequel to be a possible awards hopeful for Netflix next year. The streamer is expected...
MOVIES・2 DAYS AGO
Variety

Avoiding the heady and idyllic world of adolescent coming-of-age tales ever-familiar to viewers, Spanish writer-director Carlota Pereda presents a brazen look into the psyches of youth; their faults, rage, and insecurity. In this award-winning short-turned-feature, Pereda, known for nudging the boundaries of genre, delivers a roundhouse kick, annihilating them. “Piggy” (“Cerdita”) is set in a serene but suspect rural town, Extremadura, where our anti-heroine Sara (Laura Galán) emerges, wrought with anxiety and crippling trauma from the abuse she endures at the hands of her hostile and popular peers. Untamed cruelty ensues and, with each heartbreaking take, the viewer becomes Sara and all...
MOVIES・19 HOURS AGO
The US Sun

Daniel Craig only agreed to play James Bond after Steven Spielberg told him: ‘It’s a winner’

DANIEL Craig only agreed to play James Bond after Steven Spielberg told him: “It’s a winner.”. He asked the director to vet the script for the 2006 film Casino Royale as he worried about taking the role. The long-serving 007 saw Spielberg, 75, on holiday and could not...
CELEBRITIES・12 DAYS AGO

Among the rich selection of stills and footage in the unexpectedly affecting Lucy and Desi, there’s an image that might strike you with its likeness to the film’s director, Amy Poehler. The photo captures Lucille Ball, in one of her daffier getups, beaming at the camera: a wide-eyed, beautiful clown. More than 70 years after I Love Lucy transformed the airwaves, many people working in television can trace their inspiration to that trailblazing sitcom and its beloved stars. But Poehler brings a particularly powerful sense of connection and understanding to her debut documentary. Like Ball, she’s a funny woman with...
THEATER & DANCE・1 DAY AGO
IndieWire

Rian Johnson’s hugely anticipated mystery sequel “Knives Out 2” may be headed to theaters, Netflix, and fall festivals toward the end of 2022. Variety has reported that the follow-up to the 2019 Academy Award nominee (Best Original Screenplay) is “expected to release in theaters and the streaming platform in the last quarter of 2022” and will “also make a festival run before its release.” The original “Knives Out” was released by Lionsgate in the fall of 2019 following a world premiere at the Toronto International Film Festival. The movie earned $311 million on a budget of $40 million. Reached for comment, Netflix...
MOVIES・2 DAYS AGO
IndieWire

Johnny Depp is ready to return to the big screen. After a tumultuous divorce from Amber Heard following domestic violence allegations, Depp is slated to portray King Louis XV in French director Maiwenn’s upcoming film, Variety reported. The film is produced by Pascal Caucheteux and Gregoire Sorlat’s Why Not Productions, with Wild Bunch International handling world sales. Production will begin in summer 2022, mainly set at the Versailles Palace. Though the movie’s title and plot have not yet been revealed, King Louis XV, who was nicknamed “the beloved,” ruled for almost 60 years before dying, after being accused of corruption. Filmmaker Maiwenn is most...
MOVIES・2 DAYS AGO
USA TODAY

All the best movies we saw at Sundance Film Festival, ranked (including 'We Need to Talk About Cosby')

Oscar-nominated filmmaker Alex Garland (Ex Machina, Men) is reteaming with A24 for Civil War, an action epic that has Kirsten Dunst (The Power of the Dog, The Beguiled) set to star alongside Wagner Moura (The Shining Girls, Narcos), Stephen McKinley Henderson (Dune, Bruised) and Cailee Spaeny (The First Lady, Mare of Easttown). Garland will direct the film set in a near-future America from his original screenplay. Details as far as its plot are being kept under wraps. A24 will produce, alongside Andrew Macdonald and Allon Reich of DNA and Gregory Goodman, and handle the film’s global release. Garland received his first Oscar nomination...
MOVIES・2 DAYS AGO
Insider

The majority of superhero movies coming in 2022 are sequels, including "Aquaman 2," "Doctor Strange 2," and "Across the Spider-Verse."
MOVIES・21 HOURS AGO
Variety

‘Speak No Evil’ Review: A Queasily Effective Danish Horror Film on the Discomfort of Strangers

The fear of seemingly harmless strangers that’s heightened during our era of online “relationships” (not to mention COVID) is cannily exploited in actor-turned-writer-director Christian Tafdrup’s “Speak No Evil.” Building on the thorny couple dynamics of his prior features “Parents” and “A Horrible Woman,” this excruciatingly. Tafdrup’s squirm-inducing tale is premiering in Sundance’s Midnight section, and should find ready berth among genre fans, with strong potential for remake bids. (Distribution rights have already been secured by horror streaming service Shudder.) At the same time, its all-too-palpable cruelty will repel some viewers, in the same way such prior atypical horrors as the original...
MOVIES・2 DAYS AGO
Deadline

Ariana DeBose On Her SAG Nom For Steven Spielberg’s ‘West Side Story’: “This Nomination Is Not Just For My Work, But For Who I am”

Rita Moreno is the first Latinx actress to win an Oscar. It was her performance in Jerome Robbins and Robert Wise 1961 film of West Side Story as Anita that garnered her the win. Since Moreno’s historic win, there has only been nine Latina actresses nominated for an Academy Award, and Ariana DeBose may just be the tenth–and a shoe in to win.  DeBose was nominated for a SAG award for Outstanding Performance by a supporting actress, and she manifested this moment. “It’s not that you don’t believe something different could happen for you, but you put it out in the...
CELEBRITIES・11 DAYS AGO

(JTA) — Golden Globes fans may have noticed something different this year: The annual entertainment awards were not announced on TV, and not for COVID-19 reasons. NBC dropped the broadcast over the Hollywood Foreign Press Association’s diversity problem — none of the 87 members of the Globes’ awards body are Black.
CELEBRITIES・12 DAYS AGO
No Film School

When Steven Spielberg talks, we listen. It's hard to distill just how much of an impact Steven Spielberg has had on the culture during his time as a director. He's one of the most influential personalities in the history of cinema. His films include Jaws, Jurassic Park, Schindler's List, Saving Private Ryan, and the latest, West Side Story.
CELEBRITIES・9 DAYS AGO
Variety

A re-watch podcast for popular fantasy-drama series “Supernatural,” titled “Supernatural Then and Now,” is set to launch Jan. 24. Hosted by Richard Speight, Jr. and Rob Benedict (who played the angel Gabriel and God in the series), “Supernatural Then and Now” will feature behind-the-scenes stories with cast, crew and producers of “Supernatural” — from favorite memories on set to conversations about mythology in the writers’ room. “We are incredibly grateful for the support the fans of ‘Supernatural’ have given us over the years. We’re excited to be a part of this special gift to the fans that will arrive just in time...
TV SERIES・2 DAYS AGO
kshb.com

The products and services mentioned below were selected independent of sales and advertising. However, Simplemost may receive a small commission from the purchase of any products or services through an affiliate link to the retailer's website. It’s not quite Valentine season yet, but love is already in the air: Sasha...
CELEBRITIES・12 DAYS AGO

Steven Soderbergh’s newest thriller Kimi features Fantastic Beasts star Zoe Kravitz and Riverdale‘s Robin Givens. In the trailer released two days ago, Angela Childs (Kravitz) asks Kimi, an Alexa-type AI device, what time is it. In the next scene, Angela runs as the trailer asks “What If Every Sound”, then cuts to Angela asking Kimi to call someone named Dr. Burns. Another question is asked: ‘What If Every Moment Was Recorded?”
MOVIES・10 DAYS AGO
tvseriesfinale.com

The Offer finally has a premiere date. The drama series, which revolves around what happened behind the scenes during the making of The Godfather feature film, will arrive on the Paramount+ streaming service in April. Starring Miles Teller, Matthew Goode, Juno Temple, Giovanni Ribisi, Dan Fogler, Burn Gorman, Colin Hanks, and Patrick Gallo, the series will have 10 episodes and three will be released at launch.
TV SERIES・11 DAYS AGO
UPI News

Jan. 12 (UPI) -- Bradley Cooper recalled how Steven Spielberg picked him to direct upcoming Leonard Bernstein biopic Maestro while appearing on The Late Show with Stephen Colbert. Cooper told Colbert on Tuesday that he was obsessed with being a conductor of classical music and that Spielberg knew of his...
CELEBRITIES・11 DAYS AGO