Over the weekend, a top U.S. health official delivered some encouraging news about the pandemic. That's providing a lift to airline stocks, one of the sectors most impacted by COVID-19. American Airlines Group (NASDAQ: AAL) is leading the way higher on Monday, up more than 10% as of 1 p.m. ET, with shares of Delta Air Lines (NYSE: DAL) , United Airlines Holdings (NASDAQ: UAL) , Southwest Airlines (NYSE: LUV) , JetBlue Airways (NASDAQ: JBLU) , Spirit Airlines (NYSE: SAVE) , and Brazil's Azul (NYSE: AZUL) each up 5% or more.

Airline stocks lost more than half of their value in the early days of the pandemic as the industry quickly switched into crisis mode. The companies listed above were able to survive, but took on billions in added debt to make up for lost revenue and have balance sheets that are battered and bruised and in poor shape to deal with any additional crisis. 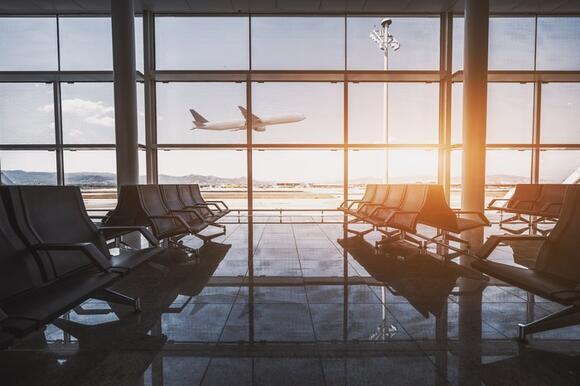 With that in mind, it is no surprise that the airlines sold off last week as part of wider concerns about the new omicron variant. But Dr. Anthony Fauci, director of the National Institute of Allergy and Infectious Diseases and one of the key U.S. government point persons on the pandemic, told CNN over the weekend that there are some encouraging data indicating the latest variant is not as severe as past iterations.

"Thus far it does not look like there's a great degree of severity to it, but we've really got to be careful before we make any determinations that it is less severe or really doesn't really cause any severe illness," Fauci said.

Fauci's comments helped spark a 2% rally on Wall Street on Monday, and airlines are rallying well ahead of market averages. The airlines are healthy enough to survive all but a nightmare scenario where we return to early COVID-related lockdowns and travel restrictions, and Fauci's comments are an indication that, at least at this point, we do not appear to be heading in that direction.

American is getting an added boost after the stock was upgraded to an in-line rating from underperform at Evercore ISI . Analyst Duane Pfennigwerth wrote that the shares were down about 15% since Thanksgiving, giving American a more reasonable valuation. The analyst noted that American still has a heavier debt load than its peers, but thinks it will be able to strengthen its balance sheet in the years ahead through lower capital expenditures.

Azul's Brazilian domestic market has been slower to recover than the U.S., but the airline is among the healthiest in Latin America and is well positioned to expand.

Investors would be wise to pay attention to the second half of Fauci's comments, where he notes that we still need to be careful about rushing to any conclusions. As we've learned over the past 18 months pandemics by their nature are unpredictable, and even if omicron doesn't end up as bad as some have feared we could still face further twists and turns before COVID is behind us.

For those who have a long enough time horizon, there is a lot to like about long-term travel trends. An emerging global middle class, coupled with pent-up demand for travel in the U.S. and elsewhere and an eventual return of business travel, should help push airlines higher in the years to come. But it appears likely that rise will take time, and will face further turbulence along the way.

Investors willing to wait out a travel return might want to consider an aircraft leasing company like AerCap Holdings that has broad exposure to aviation instead of trying to pick and choose among individual carriers. If your preference is an airline, Delta, Southwest, and United all look like better bets to bounce back sooner compared to American, which as Pfennigwerth notes has more work to do to repair its balance sheets.

10 stocks we like better than Southwest Airlines
When our award-winning analyst team has a stock tip, it can pay to listen. After all, the newsletter they have run for over a decade, Motley Fool Stock Advisor , has tripled the market.*

They just revealed what they believe are the ten best stocks for investors to buy right now... and Southwest Airlines wasn't one of them! That's right -- they think these 10 stocks are even better buys.

The most successful U.S. network airline is poised for a sharp recovery -- once the omicron wave of the COVID-19 pandemic passes.
ECONOMY・2 DAYS AGO
The Motley Fool

The CDC's Conditional Sail Order is sailing softly into the night.
ECONOMY・4 DAYS AGO
The Motley Fool

Why Shares of Coinbase Global Are Falling Today

There is no obvious reason for the move.
STOCKS・7 DAYS AGO
The Independent

US airline chiefs warn that 5G could cause ‘catastrophic’ disruption

Less than 36 hours before Verizon and AT&T are set to deploy new 5G services, the top executives of major passenger and cargo carriers in the nation warned against an impending “catastrophic” aviation crisis.The airline industry leaders said in a letter the deployment of new 5G mobile internet technology could lead to the grounding  of a number of flights due to interference from the technology, "potentially strand tens of thousands of Americans overseas" and lead to a "chaos" for US flights."We are writing with urgency to request that 5G be implemented everywhere in the country except within the approximate 2...
TECHNOLOGY・3 HOURS AGO

American Airlines Stock (AAL): Why The Price Went Up Today

Shares of Spirit Airlines (NYSE:SAVE) rose 4.99% on the day and moved to their highest level of 2022 with the rally. SAVE is still down more than 40% from its 52-week high. The entire U.S. airline sector had a strong day after Delta reported Q4 results ahead of expectations and guided for profitability in Q2 and beyond. Delta's CEO also made the media rounds to say the the company thinks the worst of omicron is over.
STOCKS・4 DAYS AGO
The Motley Fool

Why Shares in Evergrande Were Suspended Today

Why Ford, GM, Nio And Workhorse Shares Are Falling Today

Why Shares of Royal Philips Got Crushed Today

The medical technology company is one of the first companies to downgrade expectations after the recent surge in coronavirus cases. Shares in medical technology company Koninklijke Philips Electronics (NYSE:PHG) slumped more than 15% in early trading on Wednesday. The move comes after a disappointing update on its fourth quarter of 2021.
STOCKS・5 DAYS AGO
Motley Fool

Why Shares of Beauty Health, The RealReal, and Warby Parker Were Down Today

Shares of many consumer-facing companies were trading lower on Monday afternoon, on investor concerns about the growing likelihood of higher interest rates in the United States. Here's where things stood as of 2:15 p.m. ET for these three consumer companies' stocks, relative to their closing prices on Friday:. Beauty Health...
BUSINESS・7 DAYS AGO
Benzinga

Kicked off a flight for wearing a crop top: Why do airlines still have such conservative dress codes?

You’re off to catch a flight for your long-awaited beach holiday. You’ve paid for the hotel, bulk-bought the SPF and made an in-flight playlist to die for. The last thing you’re thinking about, I’d wager, is the modesty of your outfit.Yet, in recent years there have been a spate of cases where airline staff have deemed a passenger’s clothing - usually a woman’s - “inappropriate”, resulting in them either being kicked off their flight or forced to cover up.On Saturday, a former Miss Universe, Olivia Culpo, was allegedly told to cover up by American Airlines staff, or risk being...
LIFESTYLE・22 HOURS AGO
The Motley Fool

Social Security could look a little different for you in January 2022.
BUSINESS・22 HOURS AGO
The Motley Fool

The quick answer? Yes. But whether you'd want to is a different story.
PERSONAL FINANCE・20 HOURS AGO
The Motley Fool

A sell-off is a good opportunity to buy shares of these three companies.
STOCKS・20 HOURS AGO
The Motley Fool

Walmart filed several applications with the U.S. Patent and Trademark office in December that suggest its strong metaverse aspirations.
RETAIL・14 HOURS AGO
The Motley Fool

Stimulus Update: File Your Taxes Early if You're Due Stimulus Funds

You can claim missing stimulus money on your taxes, but you'll want to do so as soon as possible.
INCOME TAX・17 HOURS AGO
The Motley Fool

Income investors have a lot to like with these popular Robinhood stocks.
STOCKS・21 HOURS AGO