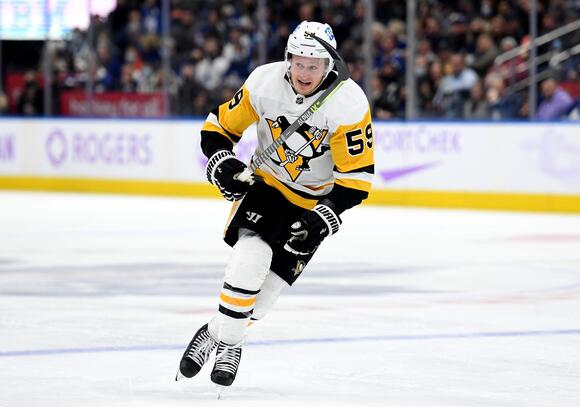 PITTSBURGH (93.7 The Fan) – Forward Jake Guentzel becomes the second Pens player to get a weekly NHL honor. Guentzel is the league’s Third Star of the week for his five goals in three games.

Going into Monday’s game in Seattle, Guentzel has a career-high 12 game point streak with 10 goals and six assists over the span of the dozen games.  The 27-year-old was the catalyst for the only win of the week, his fourth career hat trick in a 4-1 victory over Vancouver on Saturday.

Guentzel is 10 th in the NHL with 13 goals, this after starting the season with one goal in his first seven games.  The winger with points in every single road game this season

Florida’s Jonathan Huberdeau had a goal and eight assists in three comeback wins and is the number one star.  Lightning defenseman Victor Hedman is the number two star after two goals and six assists in four games as Tampa Bay got three wins and an overtime loss.

Krystof Hrabik of the AHL’s San Jose Barracuda was suspended 30 games for directing a racist gesture at Tucson Roadrunners forward Boko Imama, who is a Canadian of Congolese descent.
HOCKEY・2 DAYS AGO
CBS Boston

BOSTON (CBS) — The Bruins earned a spirited 4-3 win over the Washington Capitals on Thursday night, but it may have come at a cost. Brad Marchand had to leave the game in the second period after taking a hit from behind by Washington’s Garnet Hathaway, which head coach Bruce Cassidy called a “cheap hit.” Marchand suffered an upper-body injury on the play, which occurred a little more than halfway through the second period. The Bruins winger went into the corner to play the puck, and Hathaway lined him up and delivered a crushing blow right between the numbers, sending Marchand...
NHL・2 DAYS AGO

The NHL season officially started back on October 12. In this article, we track all the NHL games today as
NFL・1 DAY AGO
News 12

Gillies played with the Islanders from 1974 until 1986. He was elected to the Hockey Hall of Fame in 2002.
NHL・1 DAY AGO
Sports Illustrated

Krystof Hrabik made a racist gesture toward Boko Imama of the Tucson Roadrunners.
HOCKEY・2 DAYS AGO
WFAN Sports Radio

’When you saw Clark Gillies, you thought Islander’: Head coach Barry Trotz and the team react to the unexpected death of a franchise legend.
NHL・1 DAY AGO

LOS ANGELES (AP) — Playing the second game of a back-to-back set, the Colorado Avalanche looked tired. They weren’t able to bombard the Los Angeles Kings with their typical offensive brilliance, finding themselves on the wrong side of a 14-shot disparity. And they still won. Kiefer Sherwood scored his first goal in nearly three years, […]
NHL・2 DAYS AGO
San Diego Union-Tribune

Leon Draisaitl had two goals and two assists, Evan Bouchard also scored twice and the Edmonton Oilers came from behind to snap a seven-game losing streak with a 5-3 victory over the Calgary Flames
NHL・23 HOURS AGO
fantraxhq.com

FantraxHQ is the official content sponsor of Fantrax.com, the hottest Fantasy Site of 2021. There have been a handful of long-term injuries to players this season. A few of them have recently returned, and have done quite well in their performances thus far. These players being out of commission for so long makes it more likely for them to be forgotten by other managers. Try and pick one of them up from the fantasy hockey waiver wire before everyone catches on.
NHL・2 DAYS AGO

Justin Faulk had a goal and an assist and the St. Louis Blues beat the undermanned Vancouver Canucks 3-1
NHL・34 MINUTES AGO
Sports Illustrated

Discover player props odds, plays, and insights for Cameron Brate in his NFL Playoffs contest with the Tampa Bay Buccaneers against the Los Angeles Rams.
NFL・1 DAY AGO

The Seattle Kraken might want to get Davy Jones a locker. And fast. The expansion Kraken, who were coming off
NHL・2 DAYS AGO
Sportsnaut

The Winnipeg Jets activated captain Blake Wheeler from long-term injured reserve prior to Saturday’s game at Boston. Wheeler, 35, had
NHL・1 DAY AGO
Sportsnaut

The Carolina Hurricanes defeated a couple of playoff-caliber Eastern Conference teams this week. Now they try to keep it going
NHL・1 DAY AGO