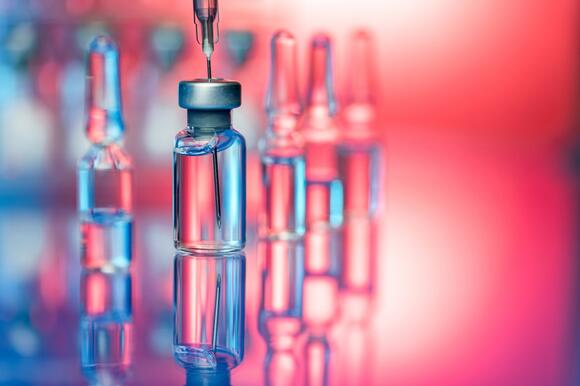 LA JOLLA, Calif. ( StudyFinds.org ) – A new vaccine ingredient may soon boost the effectiveness of the COVID-19 vaccine and even create a new defense against illnesses like HIV. Scientists from the La Jolla Institute for Immunology and MIT created a “combination” adjuvant called a saponin/TLR agonist which they believe will increase the power of all vaccines.

“This is super exciting,” says LJI Professor Shane Crotty, Ph.D., a member of the LJI Center for Infectious Disease and Vaccine Research, in a media release . “We’re really hoping this adjuvant can help out.”

Current vaccines only use a few adjuvants

Vaccines work by teaching a person’s immune system to recognize a virus and response to it by producing antibodies. To do this, the vaccine shows a patient’s immune system a small piece of the pathogen, an antigen, so it knows what to attack.

The antigens aren’t the only thing vaccines use however, as scientists often add adjuvants to the mix. These particles act like a red flag that the human immune system reacts to more aggressively than just an antigen by itself. The immune response develops well-trained T cells to fight infections and memory B cells which continue to remember the virus for years.

Despite their effectiveness, researchers explain that the U.S. Food and Drug Administration (FDA) have only approved five kinds of adjuvants for use in vaccines. Dr. Crotty says the world needs new adjuvants to create more effective and innovative vaccines to battle serious viruses like COVID and HIV.

“Licensed vaccines depend on adjuvants, and there are very few adjuvants available for use in humans,” Crotty reports.

“New adjuvants that help drive particular aspects of antibody or T cell-mediated immunity may be an important part of successfully developing vaccines against challenging pathogens such as HIV, TB, and malaria,” adds study co-leader and MIT professor Darrell Irvine, Ph.D.

How does the new adjuvant work?

The team wanted to test a combination of saponin and TLR agonist adjuvants after seeing how well both worked on their own. Study authors note saponin adjuvants are a safe and effective component of the Shingrix vaccine for shingles. Meanwhile, TLR agonists show the ability to stimulate the body’s innate immune response — which first recognizes antigens.

For this study, researchers chose a TLR4 agonist called MPLA out of the many TLR agonist options available. This one naturally joins together with saponin molecules, forming saponin/MPLA nanoparticles (SMNP).

Tests using mice revealed that saponin adjuvants alone trigger a strong reaction from a patient’s germinal centers. These are areas of the body’s lymph nodes which produce the memory B cells that protect patients from future infections.

Although saponin adjuvants on their own create a strong antibody response in mice, the study finds the TLR agonist are the “secret weapon” of this new vaccine candidate. The combination activates a wide range of areas within the immune system. Although saponins and TLR agonists have their own jobs, they team up to push the immune system into making more immune-strengthening T follicular helper cells and antiviral interleukin-21 molecules.

“It was more than just an additive effect,” says LJI Scientific Associate Yu Kato, Ph.D. “The combination led to more way more B cells too, and for B cells to produce antibodies, they need help from those T follicular helper cells.”

HIV vaccine on the way?

The study finds this new vaccine formula appears to be safe and effective, according to the mice experiments. Although the SMNP adjuvant still has a way to go before it becomes an option for future vaccines, the team believes it may be a good addition to the current COVID-19 shots which use a traditional protein adjuvant.

“This has, potentially, a big impact for human health,” Crotty says.

The new design may also provide a template for stopping the spread of HIV . Over the last 30 years, scientists have continued to struggle to create a serious immune response within patients.

“If we keep doing the same thing, these vaccines are not going to work,” Kato concludes. “We need to do things smarter. That’s why it is critical for us to understand how adjuvants really work.”

The study is published in the journal Science Immunology .

If the higher end of projections comes to pass, it would push total U.S. deaths from COVID over 1 million by early spring.
WEATHER・14 HOURS AGO
BigCountryHomepage

Some patients in California received a smaller than recommended dose of their Pfizer vaccine last year.
WALNUT CREEK, CA・11 HOURS AGO
BigCountryHomepage

“It is reassuring that the study found only a small, temporary menstrual change in women,”
PUBLIC HEALTH・2 DAYS AGO
MarketRealist

An average of over 500,000 new COVID-19 cases in the U.S. are reported every day, The New York Times reported on Jan. 5. The surge is primarily fueled by the omicron variant of the COVID-19 virus. How many vaccinated people have died from the omicron variant?. Article continues below advertisement.
PUBLIC HEALTH・13 DAYS AGO

Up to 62 percent of women over 50 are low in vitamin D, which is produced when sun hits. Here’s how it can help boost immunity and protect against illnesses, including breakthrough Covid-19 infections. With the new Omicron variant sweeping the nation, even for fully vaccinated folks, it can’t hurt to get a little extra help in the immunity department!
PUBLIC HEALTH・28 DAYS AGO
healththoroughfare.com

It’s been just revealed that the CEO of Pfizer had something pretty interesting to say about two covid jabs and the Omicron variant. Just to refresh your memory, the new covid variant called Omicron has been making headlines all over the news for a while now, even though the symptomatology is a mild one.
MEDICAL & BIOTECH・7 DAYS AGO
Fortune

Never miss a story: Follow your favorite topics and authors to get a personalized email with the journalism that matters most to you. When news broke that an unvaccinated pregnant woman in Israel tested positive for both the coronavirus and the common flu at the same time earlier this week, it sent shock waves through the medical community and introduced a new term into the COVID-19 lexicon: “Flurona.”
LOS ANGELES, CA・12 DAYS AGO
The Independent

How effective are the Pfizer, AstraZeneca and Moderna vaccines against Omicron?

The more contagious Omicron variant of Covid-19 spread rapidly across the UK in December and into the New Year but appears to be gradually slowing down, with case numbers fallings.Prime minister Boris Johnson will review the social restrictions in England before 26 January but has said previously that his government “reserves the right” to implement tougher measures should the rate of infection begin to translate into mass hospitalisations that threaten to overwhelm the NHS.The situation remains under constant review and amendments continue to be made to testing and isolation protocols, with members of the public still encouraged to get...
MEDICAL & BIOTECH・1 DAY AGO

More patients are getting COVID-19 during hospital stays. Experts worry it's because infected healthcare workers are sick on the job.

It’s not a secret that some optimistic public voices are saying that Omicron will be the last major COVID variant. They add faith in the theory that the ongoing pandemic is approaching its end, along with all of the restrictions and lockdowns that countries across the world have imposed.
SCIENCE・1 DAY AGO
NEWS10 ABC

STUDY: Some COVID patients still infectious after over 2 months

Researchers warn that people should still be cautious around those who were recently infected.
PUBLIC HEALTH・1 DAY AGO
WOOD TV8

CDC cites obesity as culprit for hospitalizing children with COVID-19

In a study released by the Centers for Disease Control and Prevention, researchers found approximately two-thirds of COVID-19 patients aged 12-17 were obese, and the length of stay in the hospital was twice that of non-obese adolescents.
PUBLIC HEALTH・1 DAY AGO
scitechdaily.com

Study found that an antibody, P36-5D2, demonstrated a substantial decrease in infectious virus load in the lungs and brain, and reduced lung disease in laboratory models. In a study jointly conducted by the Bio-Safety Level 3 (BSL-3) Core Facility at the NUS Yong Loo Lin School of Medicine (NUS Medicine) and Beijing Tsinghua University, an antibody was found to be capable of neutralizing major SARS-CoV-2 variants of concern.
MEDICAL SCIENCE・1 DAY AGO
GV Wire

Why Do So Many Vaccinated People Get COVID-19?

Why are so many vaccinated people getting COVID-19 lately?. A couple of factors are at play, starting with the emergence of the highly contagious omicron variant. Omicron is more likely to infect people, even if it doesn’t make them very sick, and its surge coincided with the holiday travel season in many places.
PHARMACEUTICALS・14 DAYS AGO
Wyoming News

SUNDAY, Jan 16, 2021 (HealthDay News) -- The time to upgrade your mask is now. In a departure from its prior advice on face masks, new guidance from the Centers for Disease Control and Prevention urges properly fitted N95 or KN95 masks as the best protection against COVID-19, rather than cloth masks. Early in the pandemic, supply shortages of the N95 and KN95 masks led to prioritization of those masks...
PUBLIC HEALTH・2 DAYS AGO
Newsweek

The World Health Organization has warned that the Omicron variant should not be dismissed as "mild."
SCIENCE・1 DAY AGO
Wyoming News

MONDAY, Jan. 17, 2022 (HealthDay News) -- Flu vaccines protect children against serious illness, even when the vaccine doesn't match the circulating flu virus, according to a new study that reinforces the importance of flu shots. Flu viruses are constantly changing, and the effectiveness of flu vaccines can be influenced by the similarity between the viruses used in vaccine production and the viruses circulating in a given flu season. The composition of flu vaccines is reviewed annually and updated to match evolving viruses, but changes...
PHARMACEUTICALS・1 DAY AGO
GMA

The recent wave of COVID-19 includes a rise in cases among kids.
CHICAGO, IL・17 HOURS AGO
KRON4 News

Just when it feels like there’s some positive news in the fight against COVID-9, a new variant rears its ugly head, sending case numbers and hospitalizations soaring. But does that mean the previous variant is no longer a concern?
PUBLIC HEALTH・1 DAY AGO