‘Shang-Chi’ Sequel in the Works with Filmmaker Destin Daniel Cretton 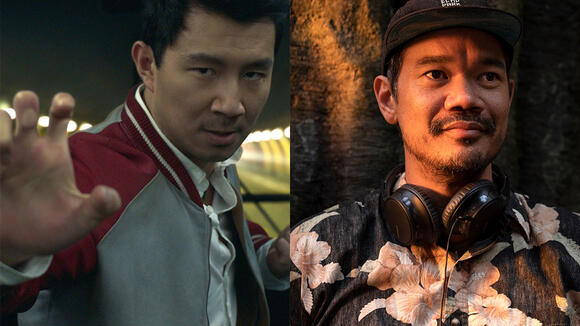 Shang-Chi and the Legend of the Ten Rings director Destin Daniel Cretton is staying in the Marvel fold, with the filmmaker signing an overall deal with Marvel Studios and Hulu’s Onyx Collective. The deal allows him to produce projects for television for both.

Cretton is also developing a sequel to Shang-Chi , the well-regarded superhero movie that debuted in September and starred Simu Liu. Cretton will return to write and direct the sequel and is also working on a new Marvel Cinematic Universe series for Disney+ as part of his overall deal.

“Destin is a powerhouse storyteller with impeccable taste in material. As we continue to expand our roster, Destin’s unique voice will help usher in an exciting slate of content for our global audience,” said Tara Duncan, president, Freeform & Hulu’s Onyx Collective.

Cretton is producing via his new production company, Family Owned, which he launches with partner Asher Goldstein to build a slate of projects in film and TV that highlight the experiences of communities that have traditionally been overlooked by pop culture.

“Destin is an amazing collaborator who brought a unique perspective and skill to Shang-Chi and The Legend of the Ten Rings . We had a fantastic time working together on the film and he has so many intriguing ideas for stories to bring to life on Disney+, so we’re thrilled to expand our relationship with him and can’t wait to get started,” said Kevin Feige, president, Marvel Studios and chief creative officer, Marvel.

“Working on Shang-Chi with Kevin and the Marvel Studios team was one of the highlights of my life, and I couldn’t be more excited about Tara’s vision for Onyx Collective. I can’t wait to explore new stories & build new worlds with this community,” said Cretton.

Cretton came from the festival world, with his debut, “I Am Not a Hipster,” debuting at Sundance in 2013. He broke out with the foster care drama Short Term 12 at SXSW in 2013, which helped launch Brie Larson as a film star. He went on to direct The Glass Castle and Just Mercy before jumping to big-budget filmmaking with Shang-Chi , which broke ground as Marvel’s first to feature an Asian lead and predominantly Asian cast that included Michelle Yeoh, Awkwafina and Tony Leung.

In addition to his work at Marvel, Cretton’s deal sees him developing projects for Hulu’s Onyx Collective, which focuses on telling stories from artists of color and underrepresented voices. The talent on the roster includes Natasha Rothwell ( Insecure , SNL ), Prentice Penny ( Insecure ), and non-Marvel titles produced by Black Panther filmmaker Ryan Coogler’s Proximity.

“I fink I’m losing it.” The first trailer for Disney+ series Moon Knight dropped on Monday night and as with everything that comes from Marvel Studios, the show looks slick and spectacular. In amongst the positive reaction to the trailer, however, was social media locking on to star Oscar Isaac’s British accent. Ostensibly portraying a haunted Steven Grant who can’t tell the difference between his “waking life and dreams,” Isaac’s sort-of-London-may-be-south-east-probably-nowhere-cor-blimey-guv accent is distracting enough that it has become a Twitter talking point, more so than Ethan Hawke’s quite excellent wig. There’s no denying, though, that both actors are embracing the chaos. Twitter...
MOVIES・1 DAY AGO
The Hollywood Reporter

I’m Your Man, directed by German multi-hyphenate Maria Schrader, is a sci-fi romance that explores what it really means to have the perfect partner. As Germany’s entry for best international feature, the film has since been shortlisted as one of the 15 films that will vie for a best international feature nomination at the 94th Academy Awards. Based on Emma Braslavsky’s short story, Ich bin dein Mensch, the film chronicles Maren Egger’s Alma, a lonely scientist who agrees to a three-week experiment that pairs her with a humanoid robot named Tom (Dan Stevens). For Schrader, the chance to turn the...
MOVIES・16 HOURS AGO
The Hollywood Reporter

Gold House and the Coalition of Asian Pacifics in Entertainment have unveiled their second annual Gold List, which recognizes outstanding work from artists of Asian descent during the film awards season. Shang-Chi and the Legend of the Ten Rings topped the list, which is voted on by members of Gold House, the CAPE Board, as well as the Gold Open Advisory Council, notching wins for Best Picture, Director (Destin Daniel Cretton), Supporting Actor (Tony Leung) and Supporting Actress (Awkwafina). Japan’s Drive My Car, which already has swept multiple critics’ association awards, including New York and Los Angeles, was an honorable mention for...
MOVIES・1 DAY AGO
IndieWire

It’s been two months since “Black Panther: Wakanda Forever,” the sequel to the popular Ryan Coogler-directed feature “Black Panther” halted production. Now, it’s finally set to move forward after a series of delays including an on-set injury and on-going COVID-19 infections. Actress Letitia Wright, who played Shuri in the first feature and is set as the lead of the sequel, is set to return to filming which is taking place in Atlanta. Wright endured an on-set injury back in August which prohibited her from continuing filming. The actress has also faced backlash on social media for controversial statements related to the...
MOVIES・2 DAYS AGO

Gaspard Ulliel, one of France's best-known actors and star of Hannibal Rising and Marvel's upcoming Moon Knight series, has died following a ski accident. He was 37. The AFP confirmed the actor's death on Wednesday morning. According to the Associated Press, the actor was skiing in the Savoie region in...
CELEBRITIES・2 HOURS AGO
thedigitalfix.com

One of the best sci-fi series ever made is getting a sequel. NBC has ordered a pilot for a follow-up to Quantum Leap, a time travel TV series that ended in 1993 after five seasons. The Hollywood Reporter has the news, providing a synopsis. “It’s been 30 years since Dr...
TV & VIDEOS・5 DAYS AGO
film-book.com

The next installment of a wildly popular horror movie series, Final Destination 6, is proceeding in development as a project for HBO Max. It may be 11 years since Final Destination 5 graced movie screens but now, there is an official Final Destination 6 in the works as a movie that will premiere on streamer HBO Max. This news only gets better as the treatment for the film has been written by none other than Jon Watts, the man behind the current box-office blockbuster, Spider-Man: No Way Home. Watts will also serve as a producer on the forthcoming film.
TV & VIDEOS・7 DAYS AGO
Stanford Daily

The superhero behind Shang-Chi: Simu Liu

What makes someone a superhero? An inspirational origin story? Supernatural ability beyond what is expected? Courage? By every metric, actor Simu Liu is a superhero. Born in Harbin, China in 1989, Liu immigrated to Ontario at the age of five, where he spent the remainder of his childhood. Raised by immigrant parents, Liu lived frugally and faced immense pressure to succeed academically, an experience shared by many children of immigrant families. In a letter to his parents, Liu describes the animosity he developed toward them in response to the pressure put on him: “We fought often. If I tripped on my laces, I was clumsy. If I scored below an A, I was stupid. If I wanted to hang out with my friends, I was wasting my time. I grew to resent the pressure you put on me, resolving to make your lives as difficult as you were making mine.”
MOVIES・12 DAYS AGO

Radican at the Movies: in-depth review of Marvel’s Shang-Chi and the Legend of the Ten Rings, look at home release extras

SPOTLIGHTED PODCAST ALERT (YOUR ARTICLE BEGINS A FEW INCHES DOWN)... Shang-Chi and the Legend of the Ten Rings adds an Asian hero to the Marvel Cinematic Universe as it enters the next phase after the events of Avengers: Endgame. This origin story is partially an ode to wuxia with beautiful fighting scenes with bright and colorful backdrops, but it also features breathtaking action scenes as well in buses and buildings.
MOVIES・12 DAYS AGO
COMICBOOKMOVIE.com

Shang-Chi and the Legend of the Ten Rings exceeded everyone's expectations both critically and commercially last year, singling itself out as one of Marvel Studios' best origin stories. Disney wasted no time in announcing a sequel, and after a mid-credits scene teasing a huge threat to Earth, it feels like the stakes are about to be upped considerably.
MOVIES・8 DAYS AGO
Collider

Disney and Marvel Studios broke records last year with their slate of superhero films, and they’re not stopping now. Once again Disney looking to snag a Best Picture Award at the upcoming 2022 Oscars by pushing Chloé Zhao’s Eternals. The film’s official campaign lists multiple categories including Best Picture, Best Director, Best Cinematography, and a plethora of others covering nearly every aspect of the film.
MOVIES・10 DAYS AGO

EXCLUSIVE: Narcos, Peppermint and Coyote star Juan Pablo Raba is joining John Cena and Alison Brie in director Pierre Morel’s action comedy Freelance. Filming is now underway in Colombia on the movie, which follows a special forces operator (Cena) who decides to retire from the Army and start a family back in the U.S. After several years of mortgage payments, school drop-offs, backyard barbecues and trying to conform to life in suburbia, he decides to come out of retirement to take a gig providing security for a female journalist (Brie) as she interviews a cruel dictator who may or may not...
MOVIES・1 DAY AGO
ComicBook

Is the Shang-Chi Director's Disney+ Series an Iron Fist Reboot?

When Marvel Studios announced it was bringing Shang-Chi and the Legend of the Ten Rings director Destin Daniel Cretton back to helm Shang-Chi 2, one of the news items to come along with it was the reveal that Cretton is also directing a new Marvel show for Disney+. Naturally, speculation immediately went to the series being a Shang-Chi spinoff, potentially starring the hero's sister Xialing and featuring her new leadership role in the Ten Rings organization. However, there are clues this Disney+ series will instead reboot the Netflix street-level hero Iron Fist in the Marvel Cinematic Universe.
TV & VIDEOS・7 DAYS AGO