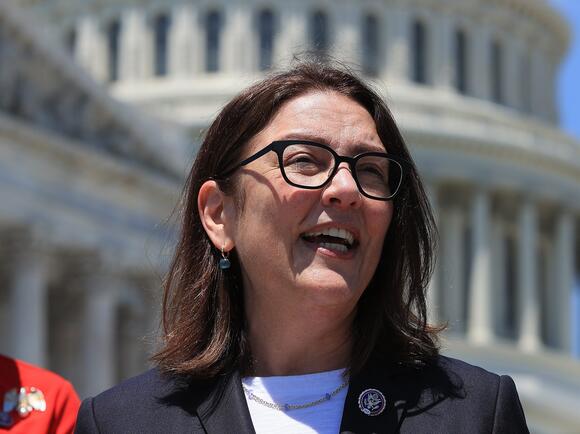 Ninety-five House Democrats are urging the Senate to approve President Joe Biden's social spending bill before the end of the month. They say action is necessary to prevent a lapse in monthly child-tax-credit payments.

"Our members stood united in passing the Build Back Better Act last month and now it is time for the Senate to act before the expanded Child Tax Credit payments expire at the end of December," Rep. Suzan DelBene, the chair of the moderate-leaning New Democrat Coalition, said in a statement.

She went on, "American families cannot afford to lose this critical middle-class tax cut, which has cut child poverty in half and helped millions of families afford childcare, pay their bills, and put food on the table."

The remarks came as Senate Majority Leader Chuck Schumer of New York issued a statement on Monday doubling down on approving the $2 trillion Build Back Better legislation by Christmas. The measure would establish universal pre-K for young children, renew the bulked-up child tax credit for another year, and combat the climate emergency.

All 50 Senate Democrats must coalesce around the package so it can clear the 50-50 chamber over unanimous GOP opposition. Schumer said the Senate parliamentarian was still working to ensure that all parts of the bill had an effect on the federal budget so that it complied with the party-line reconciliation process. Otherwise, some provisions could still be stripped.

But the swift timeline for passage is threatened by at least one key swing vote: Sen. Joe Manchin of West Virginia. He has declined to throw his backing behind the House-approved bill, including the one-year expansion of the child tax credit. Last week, he told Insider it was still "a work in progress."

Other Senate Democrats are starting to raise concerns about a potential lapse. "I think it's extraordinarily important to keep this program on track," Sen. Ron Wyden of Oregon, the chair of the Finance Committee, recently told reporters.

Millions of families rely on the benefit to cover expenses, such as the cost of rent, groceries, childcare, and school supplies. The Internal Revenue Service is scheduled to distribute the final monthly payments on December 15, and families are set to receive the other half at tax time.

Other disagreements threaten to capsize the rapid timetable. Senate negotiations on tax cuts for high-earning Americans are faltering. In addition, Manchin remains opposed to a provision authorizing four weeks of paid medical and family leave within the House bill.

Lawmakers are also struggling to clear a must-pass defense spending bill. Congress also has nine days to raise the debt limit, or the US might have trouble paying its financial obligations.

Maybe people should consider working to pay for things instead of waiting for more big government handouts . This administration does nothing except to incentivize people to stay home and make babies while they redistribute working peoples money . Come on man

And what do they do for our senior citizens are veterans people on disability they do nothing for them you would think they would actually give these people a break and help them out!

the Dictators child tax credit is a hoax. most of the monthly payments are what you would receive when you file your taxes. if you were expecting a larger return you will be very very disappointed.

"They have not had to cast one bloody vote — which shows us where they're at," Sanders said of the legislative inaction. "We have got to change that."
VERMONT STATE・17 HOURS AGO
The Independent

Sen Bernie Sanders appeared eager to escalate the war between various factions of the Democratic Party on Sunday during an interview with CNN in which he stated his support for the censure and potential primarying of a senator who voted against the party’s effort to change the filibuster and pass voting rights legislation.Mr Sanders appeared on CNN’s State of the Union and said that the Arizona Democratic Party was “exactly right” to censure their state senator after Ms Sinema voted with Republicans last week against the Democrats’ voting rights push.“On that particular vote that she and [Sen Joe] Manchin...
CONGRESS & COURTS・15 HOURS AGO
Newsweek

The veteran Democrat said African Americans were "quite aggrieved" by new voting restrictions across the country.
CONGRESS & COURTS・1 DAY AGO
The Independent

Joe Biden s run for the Democratic presidential nomination was all but declared dead as he headed to the South Carolina primary in late February 2020. He had finished fifth in New Hampshire and fourth in Iowa. Still, Biden advised skeptics to withhold judgment until a state with a large pool of Black voters, the most reliable Democratic constituency, had a chance to weigh in.“Too often your loyalty, your commitment, your support for this party has been taken for granted,” he said. “I give you my word as a Biden that I never, ever, ever will.”Black voters delivered, recasting...
PRESIDENTIAL ELECTION・22 HOURS AGO

WASHINGTON — A bipartisan group of senators is exploring legislation to overhaul how Congress counts Electoral College votes, but backers of stalled voting rights legislation are lukewarm on the effort as a substitute. The Electoral Count Act is an obscure law that has come under recent scrutiny, a year after the Jan. 6 attack on […] The post With voting rights stalled, some senators mull an update to the Electoral Count Act appeared first on Kansas Reflector.
PRESIDENTIAL ELECTION・20 HOURS AGO
Newsweek

"Black people voting is simply not a priority for Biden, Manchin or Sinema," the radio host said on his Thursday broadcast.
PRESIDENTIAL ELECTION・2 DAYS AGO
The Guardian

Sanders: ‘anti-democratic’ Republicans to blame for Biden woes, not just Manchin and Sinema

Jan 21 (Reuters) - Several U.S. House members from President Joe Biden's Democratic Party are threatening to block a renewed push for his Build Back Better spending bill if it does not include the expansion of a federal deduction for taxes paid to states and local entities. Expanding the deduction,...
INCOME TAX・2 DAYS AGO
TheAtlantaVoice

The Republican Party is working overtime to suppress the vote and undermine American democracy. It is a party which ignores climate change, the existential threat to our planet and represents the interests of the wealthy and the powerful while turning its back on struggling working-class families. The GOP is the party that gives tax breaks […] The post Bernie Sanders: The time for Senate talk is over. We need to vote appeared first on The Atlanta Voice.
PRESIDENTIAL ELECTION・1 DAY AGO
Markets Insider

Biden said this week he will try to get "chunks" of his economic agenda passed after Manchin tanked it. But it's unclear if Sen. Joe Manchin will budge on his initial concerns, like the expanded child tax credit. When it comes to the climate, though, Democrats may have an agreement...
CONGRESS & COURTS・2 DAYS AGO

Martin Luther King Jr.'s son told Newsweek 'I don't think history is going to treat them well," after the lawmakers voted with the GOP.
CONGRESS & COURTS・2 DAYS AGO
Newsweek

A Texas judge issued an injunction Friday blocking the U.S. government from enforcing a vaccine mandate on federal workers.
TEXAS STATE・2 DAYS AGO
The Guardian

How should one feel about the first year of the Biden presidency?. I can’t really say I’m disappointed, since I didn’t have high hopes going into it. But I do feel dread. This last year has felt a bit like being trapped in a nail-biting intermission between two horror films. The opening instalment consisted of Donald Trump’s first four years in office – it ended with the cliffhanger of a deadly plague and a surreal, poorly executed, but still terrifying ransacking of the Capitol. The sequel practically writes itself, as the man ascends to power a second time, even more emboldened and determined to hold on to power.
PRESIDENTIAL ELECTION・3 DAYS AGO
WTKR News 3

Democrats attempted to change the filibuster in order to pass voting rights legislation in the Senate this week.
CONGRESS & COURTS・2 DAYS AGO
Los Angeles Times

Activists warn that the failure to deliver on promises to Black voters could hurt Democrats in the midterm election.
LOS ANGELES, CA・1 HOUR AGO
The Guardian

Romney, Cheney and others were hailed as the conscience of the party but their deeds in the Senate have provoked accusations of hypocrisy
PRESIDENTIAL ELECTION・2 DAYS AGO
WATE

Despite failing to pass the voting rights legislation several times now, Democrats have vowed not to give up.
CONGRESS & COURTS・2 DAYS AGO