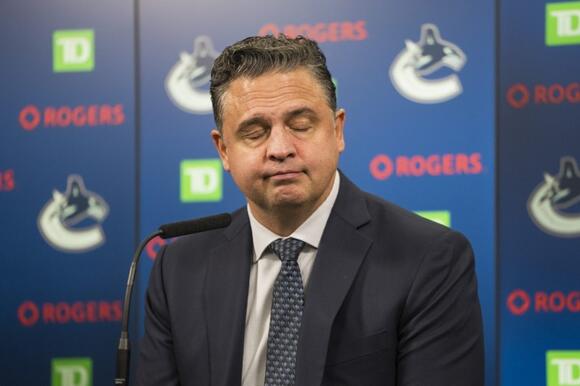 The Canucks, who are second-to-last in the Western Conference, announced the wholesale changes early Monday morning.

“These are difficult decisions, but we believed we would have a competitive group this year,” Canucks chairman Francesco Aquilini said in a statement. “As a result, I’m extremely disappointed in how the team has performed so far. I’m making these changes because we want to build a team that competes for championships and it’s time for new leadership to help take us there.” 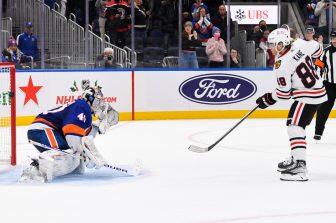 Saturday’s 4-1 defeat to the Pittsburgh Penguins dropped the Canucks’ record to 8-15-2. They are in last place in the Pacific Division with 18 points, with only the Arizona Coyotes (12) beneath them in the Western Conference standings.

Green, 50, was in his fifth season as Vancouver’s coach and exits with a record of 133-147-34. He guided the Canucks to the playoffs once — a second-round exit in 2019-20. In May, the team rewarded Green with a two-year contract extension.

“Bruce is one of the most experienced coaches in the NHL, with nearly 1,000 games behind the bench and a successful track record working with some of the game’s best talent,” Aquilini said.

The NHL season officially started back on October 12. In this article, we track all the NHL games today as
NFL・3 HOURS AGO
San Diego Union-Tribune

Justin Faulk had a goal and an assist and the St. Louis Blues beat the undermanned Vancouver Canucks 3-1
NHL・1 DAY AGO
prohockeyrumors.com

The Vancouver Canucks outshot the St. Louis Blues 39-17 last night but still managed to lose 3-1 because of a strong performance from Ville Husso. Even with that loss, the Canucks are still in better shape than they were a month ago, sitting just four points out of a wild card spot in the Western Conference. With that in mind, the question of the trade deadline continues to come up, particularly with regards to J.T. Miller. Rick Dhaliwal of CHEK TV spoke with Canucks president Jim Rutherford, who called Miller the team’s best forward and explained that more management pieces need to be in place before putting together a deadline strategy.
NHL・18 HOURS AGO
prohockeyrumors.com

The Vancouver Canucks have hired Emilie Castonguay as an assistant general manager, becoming the first female AGM in team history. Canucks’ president Jim Rutherford released a statement on the hire:. Émilie has extensive experience, is driven to succeed, and has a strong reputation in hockey for her intelligence and...
NHL・20 HOURS AGO

The Vancouver Canucks named former player agent Émilie Castonguay as an assistant general manager on Monday. Castonguay, 35, is the
NHL・18 HOURS AGO
Sportsnaut

Vegas Golden Knights winger Reilly Smith is one of the hottest names leading up to the NHL trade deadline. With
NHL・20 HOURS AGO
USA TODAY

P.K. Subban said he felt accountability to call out recent racist actions in hockey because he has established a platform to inspire better behavior.
NHL・22 HOURS AGO
Sportsnaut

The Minnesota Vikings and Chicago Bears have gone to battle 122 times on the football field, in that time the
NFL・2 DAYS AGO

Leon Draisaitl had two goals and two assists, Evan Bouchard also scored twice and the Edmonton Oilers came from behind to snap a seven-game losing streak with a 5-3 victory over the Calgary Flames
NHL・2 DAYS AGO
News 12

Ryan Pulock has now missed 22 games and counting with a lower body injury, but if there’s a silver lining to his absence, Peter Schwartz writes that it’s the emergence of Robin Salo and Noah Dobson.
NHL・18 HOURS AGO

The Pittsburgh Penguins are surging at the season's halfway point, but head coach Mike Sullivan says there is more work to be done
NHL・20 HOURS AGO
Chicago Tribune

Kevin Lankinen is back on the shelf seemingly as quickly as he returned. The Chicago Blackhawks placed the backup goalie on injured reserve Sunday with a right hand injury a day after he made 40 saves during a 4-3 overtime road loss to the Minnesota Wild. Lankinen appeared in each of the Hawks’ last two games, his first action since returning from COVID-19 protocols. Before that, his last ...
NHL・1 DAY AGO
nhltradetalk.com

When you’re a team on the edge of making or missing the playoffs, it can be difficult to make decisions on some of your better players, especially when they could fetch a decent return if traded before the NHL trade deadline. Such is the case with the Vancouver Canucks when it comes to forward J.T. Miller.
NHL・2 DAYS AGO
allaboutthejersey.com

On Wednesday night, the New Jersey Devils lost what was perhaps the most embarrassing game of the season so far, a 1-4 beatdown against perhaps the worst team in hockey right now. Well, Wednesday night, it was the Devils who were the worst team in hockey, and it wasn’t much of a debate. They started off strong, things started to go south as Arizona counterattacked, and the team had absolutely no answer thereafter, other than to just fall down and lose. Is that on the players? Absolutely, they need to be better, especially the goaltending which has been outright horrendous.
NHL・2 DAYS AGO

Rasmus Ristolainen made his return to Buffalo on Saturday for his first career game against the Sabres. Paul Hamilton has more on his return, plus some postgame thoughts on Buffalo’s 6-3 win over the Flyers:
NHL・2 DAYS AGO
USA TODAY

Keeping pucks out of the net continues to be an issue for the Columbus Blue Jackets and Ottawa Senators. With
NHL・2 DAYS AGO
San Diego Union-Tribune

David Quinn is getting a second chance at the Olympics as the coach of the U.S. men's hockey team
HOCKEY・20 HOURS AGO