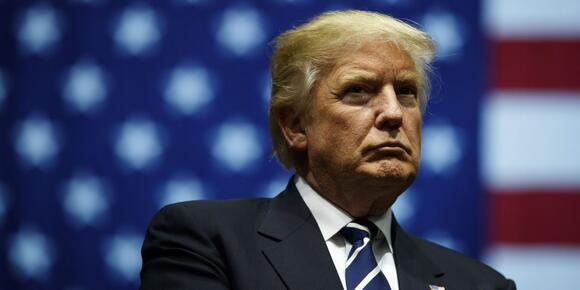 The investigations were both preliminary when the requests for information were sent to Digital World Acquisition, the SPAC said in the filing, adding that both bodies stated that they have not reached any conclusions. Spokespeople for DWAC and Trump Media did not immediately respond to Fortune’s requests for comment.

FINRA’s request sought information related to "a review of trading" that took place ahead of the Oct. 20 announcement between the SPAC and Trump Media, according to the filing. The SEC, meanwhile, asked Digital World Acquisition for a flood of information and documents, including its trading policies, the identities of some of its investors, and details on the communications between the SPAC and Trump Media.

SPACs are publicly traded blank-check companies launched to merge with a private company, which then takes over its stock exchange listing. It's a structure that was in vogue for much of the first half of 2021, as companies raced into the public markets. But regulators and lawmakers including SEC Chair Gary Gensler and Sen. Elizabeth Warren (D-Mass.) have been outspoken in their skepticism about the model and whether everyday investors are being fleeced as a result of inadequate disclosures about how SPACs work.

The Trump SPAC has not been immune from such concerns, either.

A week after the deal between Digital World Acquisition and Trump Media was announced, the New York Times reported that Patrick Orlando, the SPAC's sponsor, and Trump discussed a potential SPAC deal months before the blank-check company hit the markets. In the world of SPACs, discussions with possible merger partners are limited to after the SPAC goes public as sponsors are not supposed to be able to take their companies public with a target already identified.

On Nov. 17, Warren asked Gensler and the SEC in a letter whether the agency is examining the reports.

The probes cap off what has been a wild spell for Digital World Acquisition and Trump Media. On Saturday, the SPAC announced that it had raised $1 billion in committed capital through what is known as a private investment in a public equity. The investors who participated were not disclosed—despite such information being the industry norm.

I know that I'm not the only one that sees everything w/ his name or associated w/ him gets ran into the ground & goes tits up. his casinos, his university, his tenure as president are just a few examples that spring to mind...

Two Corinthians walk into a Trump casino bar. The bartender asks them what they're having and they say "all the furniture, the bank sent us to repossess it"

I see there are still some people and financial institutions that are setting themselves up to be ripped off by the con man trump, actually no business trump has ever started ended in a positive gain, yet people trust this known liar and con man smdh

Never miss a story: Follow your favorite topics and authors to get a personalized email with the journalism that matters most to you. Former President Donald Trump claimed Twitter Inc. “damaged the integrity” of the U.S. election system by banning him from its social-media platform for stoking last year’s insurrection.
POTUS・4 DAYS AGO
Fortune

Navient student loans totaling $1.7 billion are getting wiped out—here’s who gets it

Never miss a story: Follow your favorite topics and authors to get a personalized email with the journalism that matters most to you. Social-media sites are full of photographs of empty grocery-store shelves, and the head of one of the biggest U.S. supermarket chains says the situation will take weeks to improve.
FOOD & DRINKS・3 DAYS AGO
bloomberglaw.com

SPACs can’t put disclaimers in their financial statements that their financial reporting could run afoul of U.S. accounting rules, market regulators are warning. At issue is just how far special purpose acquisition companies—blank-check outfits whose sole purpose is to acquire and take a promising company public—can go in issuing catch-all warnings to investors. The Securities and Exchange Commission in letters to some SPACS warned against broad disclaimers that long-standing SPAC accounting practice could change and lead to future errors. The letters come on the heels of a top SEC accountant saying the agency would object to such disclaimers.
ECONOMY・5 DAYS AGO

Shares of the company connected to a planned social media app backed by former President Donald Trump rose sharply after news that the app has set a target launch date of Feb. 21. Blank-check company Digital World Acquisition Corp.'s stock jumped by nearly 20% by the close of trading on...
POTUS・9 DAYS AGO
pymnts

The Texas office of the Securities and Exchange Commission (SEC) will be conducting a probe into lenders’ disclosures and their policies on current issues like climate change and gunmakers, Reuters reported Wednesday (Jan. 5), citing unnamed sources familiar with the matter. The inquiry will reportedly have to do with...
TEXAS STATE・9 DAYS AGO
The Hollywood Reporter

The U.S. Department of Justice is scrutinizing CAA’s acquisition of ICM, digging into the major agencies’ proposed merger and its impact on the entertainment industry, multiple sources familiar with the matter tell The Hollywood Reporter. The acquisition, unveiled in September, initially planned to close by the end of 2021, but is now targeting Q2 2022, sources say. If the deal goes through, the agency and representation landscape would have three major players in Endeavor-owned WME, CAA and UTA, along with other competitors like APA, Gersh and Paradigm. According to one source, the DOJ’s antitrust division, led by Assistant Attorney General Jonathan Kanter,...
BUSINESS・2 DAYS AGO
Benzinga

Colliers analyst Donovan Schafer downgraded Hyzon Motors Inc (NASDAQ:HYZN) to Neutral from Buy and removed the price target of $15. The analyst updated the ratings after the company disclosed that it received a subpoena from the SEC requesting documentation about the Blue Orca Capital short report published in September 2021.
ECONOMY・2 DAYS AGO

The U.S. Securities and Exchange Commission (SEC) has completed its investigation into allegations that Boston Scientific (BSX +1.9%) violated federal securities laws with its decision to discontinue the sales of Lotus Edge heart device, Reuters reports. In a filing with the federal court on Monday, the company shared a letter...
ECONOMY・11 DAYS AGO
Newsweek

Companies including Nike, Columbia Sportswear and Citigroup plan to fire unvaccinated employees, while JP Morgan Chase has signaled it may do the same.
U.S. POLITICS・2 DAYS AGO
GOBankingRates

Navient Student Loan Settlement: Are You Eligible for $260 Restitution Payment?

Now that student loan servicing company Navient has agreed to a $1.85 billion settlement over alleged predatory and deceptive lending practices, tens of thousands of loan recipients might soon be...
COLLEGES・1 DAY AGO
The US Sun

Last child tax credit payment amount explained - how much will you get?. Four days until $1,800 payments to families - are you eligible?. Child tax credit 2021: How much is it and when will I get it?. LAWMAKERS could decide to issue new payments to make up for missed...
INCOME TAX・4 DAYS AGO

As the threat of a Russian invasion of Ukraine remains on the radar, analysts and traders assess the ripples such an event would send through global financial markets.
FOREIGN POLICY・1 DAY AGO
Reuters

(Reuters) - Bristol Myers Squibb's Juno Therapeutics on Friday lost a bid to persuade a U.S. appeals court to overturn its own decision throwing out a $1.2 billion patent verdict that Juno won against Gilead Sciences. The full U.S. Court of Appeals for the Federal Circuit rejected, without comment, Juno's...
BUSINESS・1 DAY AGO
The Guardian

Martin Shkreli barred from drug industry and fined $64.6m by US court

Never miss a story: Follow your favorite topics and authors to get a personalized email with the journalism that matters most to you. The pandemic could start moving into an endemic phase in 2022, though countries will need to stay vigilant as the Omicron variant spreads, according to Moderna Inc. co-founder Noubar Afeyan.
PUBLIC HEALTH・1 DAY AGO
inquirer.com

Michigan Attorney General Dana Nessel appeared on The Rachel Maddow Show Thursday, where she spoke about the scheme in which Republicans in several states that President Biden won forged election documents in an attempt to give the election to former President Trump. Fraudulent electors in Michigan, Wisconsin, Arizona, Nevada and Georgia sent documents to the National Archives to certify the election for Trump, despite Biden having won. While no one has been arrested yet in connection with this attempted election fraud, Nessel expects authorities to gather more evidence, and that this may have been orchestrated from the highest levels of government.
MICHIGAN STATE・2 DAYS AGO
Business Insider

COVID virus loses 90% of its ability to infect after 20 minutes in the air, new study says

Never miss a story: Follow your favorite topics and authors to get a personalized email with the journalism that matters most to you. Coronavirus loses most of its ability to infect shortly after being exhaled and is less likely to be contagious at longer distances, a study from the University of Bristol’s Aerosol Research Centre showed.
SCIENCE・2 DAYS AGO