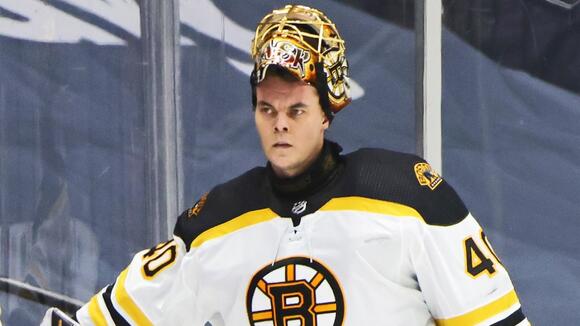 BOSTON (CBS) — It appears as though Tuukka Rask has taken a significant step toward rejoining the Boston Bruins.

Linus Ullmark wasn’t present for Monday’s practice, one of a number of absences among Bruins regulars. In years past, the Bruins have utilized an emergency goaltender during practices when one or more of the regular goaltenders were unavailable. Rask filled that role on Monday.

Rask, 34, is a free agent, after playing out the final season of his eight-year, $56 million contract last year. He underwent surgery in the summer to repair a torn hip labrum and remains without a contract.

Rask has stated numerous times that he hopes to play for the Bruins, and last week, general manager Don Sweeney essentially stated that the team would be signing Rask if and when he’s ready to play.

Rask is the Bruins’ franchise leader in games played by a goalie, wins, saves, and save percentage, and he’s second in franchise history in shutouts.

BOSTON (CBS) — Brad Marchand is a man of the people — and one funny guy. The Bruins forward had some fun with a Boston fan ahead of Thursday night’s game against the Capitals, in a way that only Brad Marchand could. As he made his way off the ice following pregame warmups, Marchand started giving out his usual high-fives and fist bumps to the fans there to greet him. One young fan was recording it on his phone, which is when Marchand decided to have his fun. He snagged the phone as he walked through the tunnel and recorded a rather...
NHL・2 DAYS AGO
CBS Boston

BOSTON (CBS) — The Bruins earned a spirited 4-3 win over the Washington Capitals on Thursday night, but it may have come at a cost. Brad Marchand had to leave the game in the second period after taking a hit from behind by Washington’s Garnet Hathaway, which head coach Bruce Cassidy called a “cheap hit.” Marchand suffered an upper-body injury on the play, which occurred a little more than halfway through the second period. The Bruins winger went into the corner to play the puck, and Hathaway lined him up and delivered a crushing blow right between the numbers, sending Marchand...
NHL・2 DAYS AGO
NESN

Bruins goaltender Tuukka Rask is in the positive since his return from hip surgery. The veteran goalie played in his third game of the season in Boston’s 3-2 win over the Winnipeg Jets on Saturday afternoon — with the team improving to 2-1 in games he’s started.
NHL・1 DAY AGO

The NHL season officially started back on October 12. In this article, we track all the NHL games today as
NFL・1 DAY AGO
News 12

Gillies played with the Islanders from 1974 until 1986. He was elected to the Hockey Hall of Fame in 2002.
NHL・1 DAY AGO
WFAN Sports Radio

’When you saw Clark Gillies, you thought Islander’: Head coach Barry Trotz and the team react to the unexpected death of a franchise legend.
NHL・1 DAY AGO

Leon Draisaitl had two goals and two assists, Evan Bouchard also scored twice and the Edmonton Oilers came from behind to snap a seven-game losing streak with a 5-3 victory over the Calgary Flames
NHL・1 DAY AGO
Sportsnaut

BOSTON (CBS) — Devin McCourty has a decision to make. The longtime Patriots safety is 34 and is not under contract beyond March, and while New England would likely want his veteran presence back on the field, McCourty needs to decide if he wants to play a 13th NFL season. That decision will not come anytime soon. After New England’s season came to an abrupt end with a 47-17 loss to the Bills in the Wild Card Round, McCourty is going to take some time to ponder his future. Chatting with his twin brother and former Patriots cornerback Jason McCourty on their...
NFL・2 DAYS AGO

The Carolina Hurricanes defeated a couple of playoff-caliber Eastern Conference teams this week. Now they try to keep it going
NHL・2 DAYS AGO
Sportsnaut

The Winnipeg Jets activated captain Blake Wheeler from long-term injured reserve prior to Saturday’s game at Boston. Wheeler, 35, had
NHL・1 DAY AGO
Sportsnaut

Nearly two years ago, Chris Kreider was a candidate to be traded before eventually signing a seven-year contract extension. Now
NHL・4 HOURS AGO
Sportsnaut

Los Angeles Kings coach Todd McLellan is convinced his team can match up with all the others in the NHL.
NHL・1 DAY AGO
Sportsnaut

After a disappointing eight-game homestand that saw them win just three times, the Vegas Golden Knights begin arguably their most
NHL・15 HOURS AGO
Chicago Tribune

Kevin Lankinen is back on the shelf seemingly as quickly as he returned. The Chicago Blackhawks placed the backup goalie on injured reserve Sunday with a right hand injury a day after he made 40 saves during a 4-3 overtime road loss to the Minnesota Wild. Lankinen appeared in each of the Hawks’ last two games, his first action since returning from COVID-19 protocols. Before that, his last ...
NHL・14 HOURS AGO