Missed Out on Ethereum? My Best Cryptocurrency to Buy Now and Hold

Ethereum (CRYPTO: ETH) went live in 2015, becoming the world's first cryptocurrency powered by a programmable blockchain. In simple terms, that means the platform is more than a decentralized payments system.

Ethereum's programmability makes it possible for developers to write code and build self-executing computer programs (smart contracts) on the platform. And those smart contracts form the core of decentralized applications (dApps), including decentralized finance (DeFi) products.

Why does that matter? Like all crypto transactions, DeFi products are secured by cryptography, meaning a network of decentralized miners (or validators) verify transactions, eliminating the need for central oversight. In turn, that makes it possible to lend, borrow, and earn on cryptocurrency without involving banks. And by eliminating those intermediaries, DeFi applications promise to improve access and reduce costs associated with financial services.

For instance, you could earn a 3.06% annual percentage yield (APY) by lending USD Coin to the Compound protocol right now. That's significantly higher than the interest rate you would earn in a traditional savings account. Powered by that value proposition, Ethereum's price has skyrocketed over 1,000,000% since hitting an all-time low in October 2015. 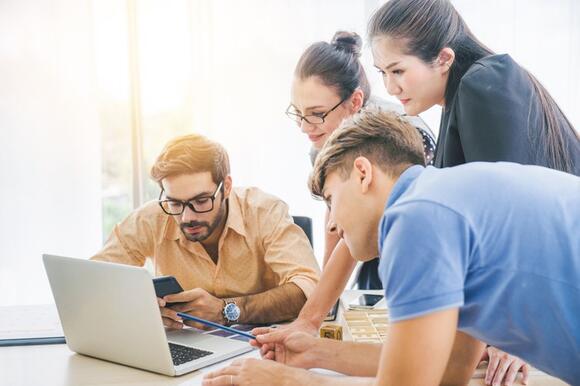 Today, Ethereum is the most popular DeFi ecosystem by a wide margin, with $164 billion invested in products on the blockchain. To that end, it still looks like a smart long-term investment, but given Ethereum's current market value of $491 billion, it probably offers less upside than other cryptocurrencies. For instance, Avalanche (CRYPTO: AVAX) has a market value of just $22 billion. Here's why this cryptocurrency could make you richer in the long run.

Similar to Ethereum, the Avalanche blockchain supports smart contracts. The key difference is the speed and scalability of the platform. Avalanche is powered by Snow consensus protocols, a type of proof of stake in which transactions are verified through random sampling, rather than by obtaining verification from every validator.

That technical detail makes Avalanche very fast. In fact, Avalanche brands itself as the fastest smart-contract platform in the blockchain industry, as measured by time to finality. For context, Ethereum can process 14 transactions per second (TPS), and each of those transactions are finalized in approximately six minutes (i.e. irreversibly added to the blockchain). But Avalanche can handle 4,500 TPS and it achieves finality in less than two seconds.

So what? Scalability is a significant problem for many blockchains. With a throughput of just 14 TPS, Ethereum is prone to bottlenecks, which result in slower transaction times and higher transaction fees, not to mention irritated users. Avalanche solves that problem, and that has made the platform popular with developers.

Case in point: Despite launching in September 2020, Avalanche is already the fifth-largest DeFi ecosystem, with $13.1 billion invested in products on its blockchain. Also noteworthy, Avalanche already supports 78 DeFi protocols (i.e. smart contracts) -- that's more than fourth-place Solana and third-place Terra combined. Looking ahead, Avalanche is well-positioned to maintain that momentum, simply because DeFi is becoming more popular. But there's still one more point worth discussing.

DeFi products aren't free. In exchange for their services, miners and validators collect transaction fees from users, paid in the form of the blockchain's native cryptocurrency. In other words, as DeFi applications on the Avalanche blockchain become more popular, more investors will have to buy Avalanche cryptocurrency, sending its price higher. That's why this digital asset looks like a smart long-term investment .

Why Bitcoin, Ethereum, and Other Cryptocurrencies Suddenly Crashed Friday Afternoon

Panic selling has taken hold in cryptocurrency this afternoon.
MARKETS・14 HOURS AGO
The Motley Fool

Bitcoin's price is down more than 40% from its November high. Is this a buying opportunity? Or could the price fall further?
STOCKS・16 HOURS AGO
The Motley Fool

The selling happened slowly and then all at once.
STOCKS・19 HOURS AGO
The Motley Fool

Bitcoin produced 73% returns last year, but there are at least three coins that could do better than the "granddaddy of crypto" this year.
CURRENCIES・21 HOURS AGO

It's a bloodbath out there. Is it time to stay away -- or is this an incredible buying opportunity?
MARKETS・20 HOURS AGO
The Motley Fool

3 Cryptocurrencies That Could Crash in 2022

These high-flying digital currencies may be sent to the doghouse.
STOCKS・1 DAY AGO
The Motley Fool

Why Cryptocurrencies Like Chainlink, Crypto.com Coin, XRP, and Algorand Are Plummeting Today

After a volatile start to 2022, the crypto market is getting crushed today.
BUSINESS・14 HOURS AGO
The Motley Fool

Bitcoin is falling hard, but not every crypto stock is created equal.
STOCKS・17 HOURS AGO

Cryptocurrencies exploded last year, but only a few of them have real staying power.
MARKETS・23 HOURS AGO
The Motley Fool

Tired of Falling Stocks and Crypto? Consider These 3 Alternative Investments for 2022

This basket of inflation-resistant asset classes is set to thrive over the long term.
STOCKS・23 HOURS AGO
The Motley Fool

These stocks are down big in the last few months but have a lot to like for long-term investors.
STOCKS・1 DAY AGO
The Motley Fool

Which blockchain-powered Bitcoin stock is a better investment?
STOCKS・22 HOURS AGO
The Motley Fool

These companies are facing a two-pronged problem so far in 2022.
STOCKS・17 HOURS AGO
The Motley Fool

The competitive advantages and differentiation offered by this crypto trio could send them to the moon.
MARKETS・2 DAYS AGO
The Motley Fool

After a volatile trading, the Trump-affiliated stocks ended the week on a down note.
STOCKS・13 HOURS AGO
The Motley Fool

Why Solana, Cardano, Polkadot, and Dogecoin All Plunged Today

The market has sold off crypto across the board on Friday.
STOCKS・20 HOURS AGO
The Motley Fool

The investor gloom fogging the Cryptosphere showed no sign of lifting at the end of the week.
BUSINESS・14 HOURS AGO
The Motley Fool

There are many top cryptocurrencies out there, but Polygon could really be a winner in 2022.
STOCKS・21 HOURS AGO
The Motley Fool

Coinbase has been hit hard of late, but could this be the catalyst investors are looking for?
TECHNOLOGY・23 HOURS AGO