The internet changed the way the world does business, the way we connect with other people, and the way we work. But several technology companies now have their sights on what could be the next generation, and it's known as the metaverse.

The existing internet is viewed by users on the screens of their respective devices. When we browse someone's social media profile, for instance, what we're observing is typically already in the past. The metaverse is set to give users a sense of presence, with real-time connections in what is slated to be a virtual version of real life. 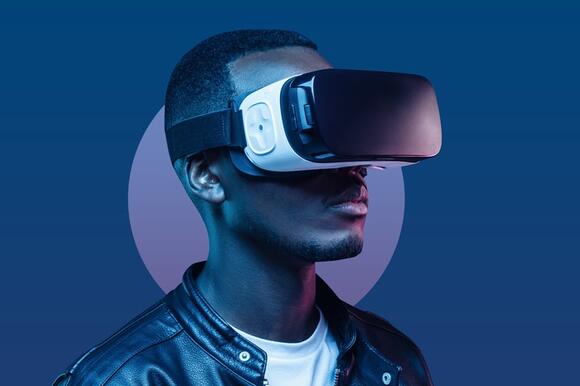 It will take a collaborative effort from some of the most innovative tech companies to create this new world. Here's two of them set to lead the charge.

1. The case for Advanced Micro Devices

Powering the metaverse will require some serious computing hardware, and Advanced Micro Devices (NASDAQ: AMD) is widely considered one of the world's best producers of semiconductors . Its computer chips are responsible for driving some of our most popular consumer electronics, and it's already breaking ground in the world of virtual reality.

AMD is partnered with the virtual reality arms of tech powerhouses Microsoft and Meta Platforms (NASDAQ: FB) to deliver innovative graphics solutions. Meta owns the Oculus line of virtual reality headsets, which will be key to its billions of users one day experiencing the metaverse, and AMD offers plug-and-play graphics chips that bring them to life.

AMD's LiquidVR technology is designed to bring the best out of its semiconductors . Its primary purpose is to ensure a smooth, seamless graphics experience amid the intense movements experienced within the metaverse. Typically, graphics technologies haven't been up to the task, leaving users with an uneasy feeling after spending too much time using virtual reality headsets, but AMD has made strides in solving this.

AMD has an immense amount of experience to lean on when it comes to innovating, so much so that it's the chipmaker of choice for the world's largest brands. Its chips can be found in Sony 's PlayStation 5, Microsoft's Xbox, and soon, Tesla 's Model S and Model X infotainment centers.

Wall Street analysts are positive on AMD's stock, with just 1 out of 39 of them maintaining a sell rating. The company is on track to deliver $16.1 billion in revenue for 2021, which represents 65% growth compared to 2020, but this could be trounced over the long term with the potential of the metaverse . 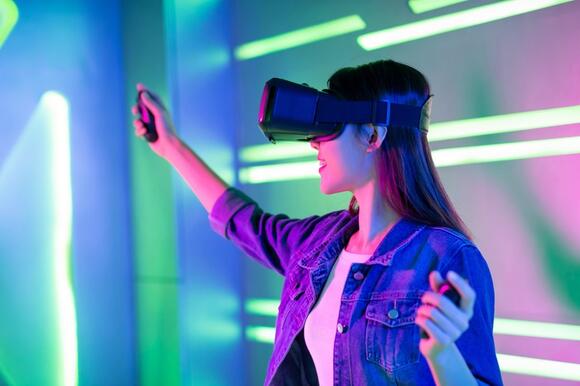 2. The case for Meta Platforms

Meta Platforms was formerly known as Facebook , and the company's name isn't all that has changed. While its flagship platform retains its name, as does Instagram and WhatsApp, the company's focus has overtly shifted to the metaverse.

With over 2.9 billion monthly active users, what organization is better positioned to develop the next generation of the internet?

Meta's CEO Mark Zuckerberg has a grand vision for the metaverse that involves user-controlled avatars, which hold inventories of digital goods and can teleport to different experiences. Mobility inside a virtual world would be far simpler than it is in real life, after all. But these features point to one thing, and it could be Meta's biggest ever financial opportunity: The metaverse will likely host its own self-sustaining economy.

If Meta builds and owns the foundations (or architecture) for the metaverse, it's rational to think it could monetize what happens within it. It's possible the company could have similar power over the virtual realm as it has over its Facebook social network, for example.

The company is allocating an enormous amount of resources to this project, with 20% of all employees now working in its Reality Labs segment.

Meta is on track to have grown its yearly revenue by 30 times over the last decade, to $117 billion in 2021. It's also highly profitable, with the stock trading at a forward price-to-earnings multiple of 22 based on $13.95 earnings per share in 2021. By comparison, the Nasdaq 100 index -- of which Meta is a component -- trades at a multiple of 34, so Meta's stock is 35% cheaper than the broader market.

And yet, should the metaverse fulfill its potential, it could dwarf Meta Platforms' past growth rates.

You don't need a mountain of money to build wealth on Wall Street.
STOCKS・16 HOURS AGO
The Motley Fool

These stocks are down big in the last few months but have a lot to like for long-term investors.
STOCKS・1 DAY AGO
The Motley Fool

The growth stock sell-off is intensifying.
STOCKS・13 HOURS AGO
The Motley Fool

Bitcoin produced 73% returns last year, but there are at least three coins that could do better than the "granddaddy of crypto" this year.
CURRENCIES・10 HOURS AGO

Select analysts and investment banks believe these fast-paced companies could more than double this year.
STOCKS・16 HOURS AGO
The Motley Fool

Cryptocurrencies exploded last year, but only a few of them have real staying power.
MARKETS・12 HOURS AGO
The Motley Fool

3 Growth Stocks That Are Screaming Buys in January

Investors looking to add growth stocks to their portfolios this month shouldn't miss these names.
STOCKS・14 HOURS AGO
The Motley Fool

Ford Motor and Philip Morris International look poised for a bull run in the new year.
STOCKS・12 HOURS AGO

A major investor in the electric vehicle maker looks to be selling its stake.
STOCKS・9 HOURS AGO
The Motley Fool

As leaders in their industries with impressive business performance, these two companies are worth buying right now.
STOCKS・1 DAY AGO
The Motley Fool

The recent decline in tech stocks could present some great buying opportunities for investors.
STOCKS・1 DAY AGO
The Motley Fool

Got $1,000? These 2 Top Growth Stocks Could Double Your Money

These innovative companies can bounce back from dramatic sell-offs and deliver huge wins.
STOCKS・15 HOURS AGO

It's a bloodbath in the markets, and some cryptocurrencies are getting hit even harder than tech stocks today.
STOCKS・11 HOURS AGO
The Motley Fool

The selling happened slowly and then all at once.
STOCKS・8 HOURS AGO
The Motley Fool

Intuit CEO on the Power of Machine Learning for Small Businesses

Machine learning can offer a range of capabilities and insights instrumental for small business growth.
SMALL BUSINESS・15 HOURS AGO
The Motley Fool

Ouch! Shares are down about 13% year to date.
STOCKS・8 HOURS AGO
The Motley Fool

Semiconductors are the new oil, but which are the top stocks to buy now?
STOCKS・12 HOURS AGO
The Motley Fool

Here's why this massive REIT could still have plenty of growth potential.
STOCKS・15 HOURS AGO
The Motley Fool

At a market cap of just under $900 billion, it is within striking distance of reaching a rare financial designation.
MARKETS・9 HOURS AGO