3 reasons the labor shortage might stick around for years, according to JPMorgan 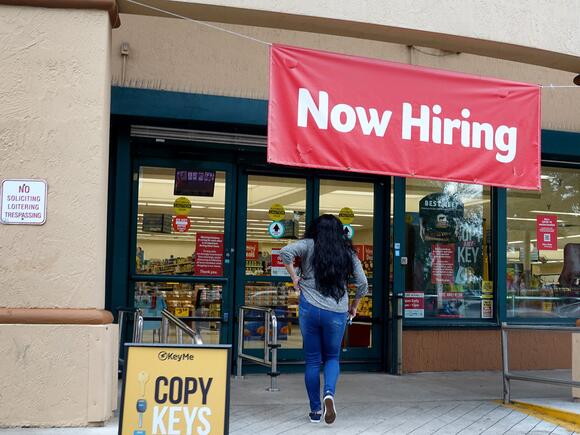 In case you haven't noticed the " now hiring" signs everywhere , closed dining rooms , or reduced business hours , there's a bit of a labor shortage all over the economy.

Workers have been quitting at near-record rates for six months in a row . Employers say they're struggling to hire , so they're bumping up wages .

Now, shortages look like they'll stretch into the new year, and perhaps even indefinitely . In a note, JPMorgan chief global strategist David Kelly broke down three reasons that we've ended up in a "great worker shortage" — and why it means it could take years for shortages to resolve.

Early retirement might also play a role: Goldman Sachs researchers found that 2.5 million people retired during the pandemic, and 1 million of those were early retirements. Even those early retirees "likely won't reverse," per Goldman, although some are " unretiring ."

Another overlooked demographic factor, per Kelly: Immigration has declined to far below the Census Bureau's projections of one million new immigrants per year. Kelly writes that the number of immigrants dropped to below 300,000 for the year that came to a close in June 2021. Insider's Jason Lalljee and Andy Kiersz estimated that two million of the three million workers missing in the labor shortages are immigrants who never came to the US because of Trump-era immigration policy.

The pandemic itself has remained a huge driver for people to not return to work. As Kelly notes, the latest data release from the Bureau of Labor Statistics shows that in November 1.2 million didn't look for work due to the pandemic — a number "little changed from October."

That could be due to everything from childcare or other care needs or, as Kelly notes, people still contending with long-Covid symptoms . The pandemic has also disrupted the jobs that need workers and the ones who are available, resulting in what economists call a skills mismatch .

Insider's Hillary Hoffower and Andy Kiersz found that, as of October 2021, Americans were spending more on goods than ever before. Kelly said that savings from various aid programs also upped demand for services and goods, with Americans eager to spend money on services after nearly two years. Notably, CNBC reported that Americans did add about $4 trillion to their savings throughout the pandemic — but 70% of those savings went to the top 20%.

Even so, that higher demand is "likely making the labor shortage even more extreme."

Kelly said that factors like higher productivity, immigration reform, and higher wages will eventually help ease the shortages — all things that are already seeing some pick-up. But that doesn't mean the problem will solve itself anytime soon.

"All of these forces should gradually resolve the current excess demand for labor," Kelly writes. "However, barring a recession, this process could take years."

Renting Robot Workers Can Cost Roughly Half as Much as Hiring Humans — What Does This Mean for US Workforce?

Robot workers appear to be taking part in their own version of the gig economy, with some being rented out to short-handed companies for nearly half the cost of a human worker -- which does not bode...
ENGINEERING・23 HOURS AGO
The Post and Courier

The number of unemployed South Carolinians declined in the final month of last year, sending the state's unemployment rate lower to 3.5 percent. The December jobless figure fell from 3.7 percent the previous month, according to a report released Jan. 25 by the S.C. Department of Employment and Workforce. Monthly...
CHARLESTON, SC・22 HOURS AGO
Fortune

Never miss a story: Follow your favorite topics and authors to get a personalized email with the journalism that matters most to you. Container shipping companies have had a banner year, collecting profits that industry experts call "surreal," at the same time as it's seeing a labor shortage caused by unhappy and underpaid workers. That threatens to further weaken the already precarious global supply chain—and throw those record profits into peril.
INDUSTRY・2 HOURS AGO
MarketWatch

The categories with the greatest price increases over the past year are the things lower-income households spend most of their income on.
NEW YORK CITY, NY・1 DAY AGO

Without the buffer of emergency savings, an unexpected car repair or a 25% increase in the cost of heating a home can be tough to take on.
BUSINESS・2 DAYS AGO
AFP

American consumers were feeling less confident in January amid elevated prices and a Covid-19 resurgence, but their views of the economy and inflation were growing more positive, a survey released Tuesday showed. The Conference Board's consumer confidence index declined to 113.8 in January, less than two points below where it was in December but above analysts' forecasts, with the data showing Americans feeling better about the economy today but less certain about its short-term future. The survey indicated a slight downturn in consumers' expectations for inflation amid a surge in prices across the United States. However the Conference Board's senior director of economic indicators, Lynn Franco, noted "both confidence and consumer spending may continue to be challenged by rising prices and the ongoing pandemic."
BUSINESS・1 DAY AGO
Outsider.com

Why America Is Facing Serious Labor Shortage: By the Numbers

The U.S. is still fighting the effects of the labor shortage crisis. While the deficit became more noticeable during the pandemic, the cause has more to do with an issue of generational numbers rather than public health. Since the start of the pandemic, many companies have had to close their...
ECONOMY・1 DAY AGO
franchising.com

It's Not A Labor Shortage, It's A Turnover Crisis

HARRISBURG (AP) – The PA Department of Labor and Industry said that the unemployment rate for the Keystone State dropped three-tenths of a percentage point to 5.4% in December. The national rate was 3.9% in December. In a survey of households, the labor force shrank for the seventh straight month, reflecting a worker shortage that some economists attribute partly to an increase in people who have recently gone to work for themselves. In a separate survey of employers, payrolls in PA grew in December by over 14,000, driven primarily by hiring in trucking and warehousing.
PENNSYLVANIA STATE・2 DAYS AGO
Axios

Yes, the pandemic has created unusual temporary labor market dynamics. But in the bigger picture, the 2010s were a golden age for companies seeking cheap labor. The 2020s are not. The big picture: In the 2010s, the massive millennial generation was entering the workforce, the massive baby bo0m generation was...
ECONOMY・4 DAYS AGO
FingerLakes1.com

Big fast food chains across the nation are forced to cut back their operating hours due to a major labor shortage. The COVID-19 variant Omicron is continuing to spread at a rapid rate, crippling the industry. Many workers were lost thanks to a forced vaccine mandate, while others simply do...
RESTAURANTS・8 DAYS AGO
Minneapolis Star Tribune

The big constraints on American business over the past year — shortages of workers and goods — won't get better any time soon, Corie Barry, the chief executive of Best Buy Co., said Friday. "Because the underlying factors are so diverse, my guess is that there is a...
MINNEAPOLIS, MN・11 DAYS AGO

America's labor shortage is bigger than the pandemic

The shortage of workers in the U.S. has become a flywheel of doom, messing up our lives and society writ large. And many of the underlying problems that led to this breakdown are bigger than the pandemic. The big picture: Millions of immigrants, older workers and mothers are missing from...
PUBLIC HEALTH・12 DAYS AGO
MarketWatch

The Fed said Wednesday it "will soon be appropriate" to raise rates, and signs point to the first hike arriving as early as its March meeting.
BUSINESS・2 HOURS AGO
Markets Insider

Fed officials didn't say exactly when the first rate hike will arrive, but signs point to an increase coming as early as March.
BUSINESS・2 HOURS AGO
24/7 Wall St.

Jobs Where People Need the Most Time Off

There were 2.7 million nonfatal workplace injuries and illnesses among private-industry employees in 2020, a drop of 5.7% from 2.8 million in 2019, the  Bureau of Labor Statistics reported in November. The estimates, complicated by the COVID-19 pandemic, came from the Survey of Occupational Injuries and Illnesses. Even though ours has become a service-oriented economy […]
ECONOMY・6 HOURS AGO
KFOR

‘The Great Resignation’ is here: 6 in 10 have already written letter for day they quit their job

Over half of Americans have a resignation letter drafted and saved for when they hit their breaking point at work.
OKLAHOMA CITY, OK・5 HOURS AGO
Markets Insider

Don't expect the Fed to keep coming to the rescue of the stock market, legendary short-seller Jim Chanos suggested. "I think it's a very dangerous idea to uphold," he told CNBC on Monday. Chanos said the Fed's series of rate hikes in 2018, which tanked stocks, was a "big error."
STOCKS・1 DAY AGO
The Motley Fool

If you're not careful, you could end up slashing a crucial income stream for life.
PERSONAL FINANCE・2 DAYS AGO