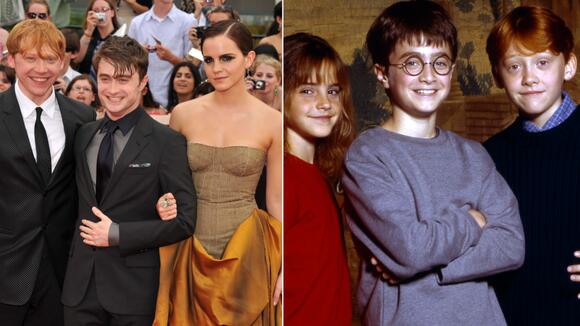 ( KTLA ) — The cast of “Harry Potter” will reunite to celebrate the 20th anniversary of the beloved franchise’s first film, and HBO Max has released a “first look” teaser of the special.

Actors Daniel Radcliffe, Rupert Grint and Emma Watson will travel back to Hogwarts for the first time for the retrospective special “Harry Potter 20 th Anniversary: Return to Hogwarts,” which will drop at midnight on New Year’s Day on HBO Max.

‘Ironton Wizardfest’ to bring in thousands of attendees

The special will tell the story of how the film was made through interviews and cast conversations with the actors, according to HBO Max.

“It has been an incredible journey since the debut of the Harry Potter and the Sorcerer’s Stone film, and witnessing how it has evolved into this remarkable interconnected universe has been magical to say the least,” said Tom Ascheim, President of Warner Bros. Global Kids, Young Adults and Classics. “This retrospective is a tribute to everyone whose lives were touched by this cultural phenomenon—from the talented cast and crew who poured their heart and soul into this extraordinary film franchise to the passionate fans who continue to keep the Wizarding World spirit alive 20 years later.”

“This unforgettable event of a lifetime will unveil which fans know the vast, intricately detailed universe like the back of their hand as they compete to take home the title of House Cup Champion,” stated TBS on its website.

Fans can gear up for the retrospective special by checking out the 20th-anniversary hub on WizardingWorld.com .

For local and breaking news, weather alerts, video and more, download the FREE WOWK 13 News App from the Apple App Store or the Google Play Store .

Empty shelves? See which of these 4 ‘shortages’ is most searched in each state

Cream cheese, chicken, hot Cheetos and potatoes – see which "shortage" was most Googled by every U.S. state.
WASHINGTON STATE・2 DAYS AGO
WOWK 13 News

Rep. Jeff McNeely, R-Iredell, said on Facebook that milk “may be the answer to Covid-19,” before linking to the study published in November by an immunologist at the University of Florida.
PUBLIC HEALTH・1 DAY AGO
WOWK 13 News

GRAYSON, KY (WOWK) — The Grayson Fire Department has confirmed that one person has died and four people, including one firefighter, have been taken to the hospital for smoke inhalation following a fire. Grayson fire says that it took place right outside the Grayson Fire Department building. They say they are still working to put […]
CARTER COUNTY, KY・2 DAYS AGO
COMICBOOKMOVIE.com

BATGIRL: First Look At Star Leslie Grace On The Set Of The HBO Max Movie Revealed

Batgirl officially commenced production back in November, and we finally have a first look at some photos from the Glasgow, Scotland set of the HBO Max series. While most of the shots feature the surrounding buildings, one snap gives us a glimpse of star Leslie Grace. The In The Heights...
MOVIES・7 DAYS AGO

HBO has shared an updated version of Harry Potter 20th Anniversary: Return To Hogwarts after fans and cast members spotted onscreen mistakes in the special. The reunion was made available to stream from New Year’s Day (January 1) and sees the Harry Potter cast reunite to reminisce about the eight movies in the hit franchise while sharing previously unheard stories.
MOVIES・13 DAYS AGO
94.3 Lite FM

Potterheads now know the reason why J.K. Rowling didn't reunite with the cast for the upcoming HBO Max Harry Potter reunion. According to Entertainment Weekly, the famed author was invited to participate in the reunion special but her team believed that the archived footage from a 2019 interview on the Warner Bros. Studio Tour London would be sufficient enough. The report noted that Rowling's clips were "used sparingly" in the feature and that she primarily commented about the first of eight films in the franchise.
MOVIES・13 DAYS AGO
wjtn.com

HBO Max debuted its anticipated Harry Potter 20th Anniversary: Return to Hogwarts special on New Year's Day, but the streaming service has just re-uploaded it, after some goofs led the streaming service to summon some editing magic. Like any dedicated fan base, devotees of the Boy Who Lived and his...
TV & VIDEOS・13 DAYS AGO
Entrepreneur

The streaming platform has since re-edited the special before releasing an updated version.
TV & VIDEOS・13 DAYS AGO

The Harry Potter 20th Anniversary: ​​Return to Hogwarts event brought together the cast of the saga and is now available on HBO Max. However, Harry Potter fans have noticed an error during the reunion, which concerns Emma Watson. This photo should portray her as a child is a shot of little Emma Roberts.
MOVIES・14 DAYS AGO
NJ.com

“Peacemaker,” the live-action series based on the DC Comics character, will begin airing its third season weekly on HBO Max on Thursday, Jan. 13, 2022. Since its launch, questions about how to watch, and a few other aspects of the show’s presence on HBO Max, have become some of the most popular search trends on Google.
TV SERIES・5 DAYS AGO
TODAY.com

Where's Hermione with a Reparo spell when you need her?. Producers of the “Harry Potter” reunion special acknowledged that they shared the wrong childhood photo of Emma Watson, 31, who played Hermione Granger in the series. In the HBO Max special, a throwback pic of a little girl...
TV & VIDEOS・14 DAYS AGO
thecurrent-online.com

Born into a wolf pack In the meantime, here are a few updates on the show’s second season. Season 2 of HBO’s sci-fi thriller, “Sacrifice for Survival,” will premiere on September 25, 2017. February 3, 2022 is the date when the original Max will be available again on PlayStation.
TV SERIES・10 DAYS AGO

HBO Max Releases Peacemaker’s Full Opening Credits Sequence. Peacemaker aired its first three episodes on HBO Max yesterday. And while each 40-45 minute installment is filled with James Gunn’s usual penchant for gross-out gags and comic action, the highlight of the series so far has easily been the opening credits sequence. Clocking in at over 90-seconds, the neon-soaked opening features the show’s cast members dancing to Wig Wam’s “Do Ya Wanna Taste It?” all while sporting deadpan expressions on their faces. Now, there’s a way to watch the actors get their groove on without booting up HBO Max. The streamer has just released the full musical number on its official YouTube page. You can check out Gunn’s announcement below. Peacemaker’s full opening.
TV SERIES・3 DAYS AGO
NME

Amazon release a first-look teaser of ‘The Boys’ season three

A first glimpse at the third season of ultra-violent comedy The Boys has been released – you can see it below. The Amazon Prime Video show has also received a premiere date, with the first three episodes landing on the streaming platform on June 3. The remaining five episodes of season three will launch each Friday after the premiere, leading up to the season finale on July 8.
TV SERIES・10 DAYS AGO
IndieWire

Between thundersnow and Omicron, it was a good weekend to check out movies at home. Amazon Prime debuted Sony’s “Hotel Transylvania: Transformania,” skipping theaters to become (per the site) its #1 viewed movie (Amazon doesn’t provide a top 10). Meantime, Joel Coen’s “The Tragedy of Macbeth” arrived on Apple TV after three weeks of limited theater play. “Sing 2” (Universal/$24.99) is still the #3 film in theaters this weekend and placed #1 at iTunes, Google Play, and Vudu. “Ghostbusters: Aftermath” (Sony/$19.99) took second place at all three. The charts showed little variance, with 15 titles total on the three lists and a...
MOVIES・12 HOURS AGO