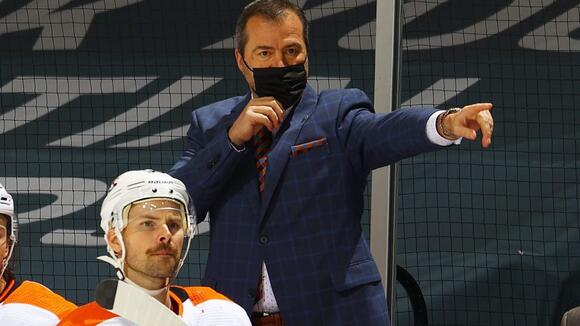 PHILADELPHIA (AP) — The Philadelphia Flyers fired coach Alain Vigneault on Monday following eight straight losses, two shy of matching a team record of 10 in a row, and with the franchise far from ending a 47-year Stanley Cup drought.

The Flyers have been one of NHL’s biggest flops of the season. Their latest loss was a 7-1 defeat by Tampa Bay on Sunday night that sealed Vigneault’s fate. Assistant coach Michel Therrien also was fired.

The Flyers are 8-10-4 and in seventh place in the Metropolitan Division. Vigneault went 147-74-54 with the Flyers and missed the playoffs last season.

Fletcher tried to blame injuries last week for the team’s recent slide, but it became clear as the losses piled up that a change was needed.

“The last ten, we slipped back. There’s no question,” he said last week. “Now the onus is on our group to get it back. When injured players come back, it makes it easier. We can’t kid ourselves. We have to get better.”

Vigneault lasted just 2-plus seasons in Philadelphia and never could lead the Flyers in the right direction this year after a promising first season in which he led them to the No. 1 seed in the Eastern Conference in the NHL’s restart bubble.

“The guy that is the leader of this group who has both his hands on the steering wheel is me and I have to find a way to get this group to play better,” he said Sunday. “We are in a bad skid right now and we need to end this. We have an opportunity tomorrow night and hopefully we will play better.”

Vigneault had led the New York Rangers and Vancouver Canucks to the Stanley Cup Final and was trying to do the same in Philadelphia, where the Flyers haven’t won it all since consecutive championships in 1974 and 1975.

The Flyers instead are trying to avoid a 10-game losing streak for the first time since the 2018-19 season.

“I have played a lot of embarrassing games and this is definitely one of them,” captain Claude Giroux said after the Tampa Bay loss. “We need to figure it out pretty quick here.”

It’s up to Yeo, at least in the short term, to figure out how to fix the Flyers. Yeo was fired by the St. Louis Blues in November 2018. He joined the Blues as an assistant in 2016 after five seasons with Minnesota. The Wild made the playoffs in three of Yeo’s four full seasons, and he was fired 55 games into 2015-16.

“This is an opportunity for me to prove that I’ve grown,” Yeo said.

Fletcher was GM in Minnesota when Yeo coached the Wild and the new coach will likely get some games to prove he can steer the Flyers toward a playoff run.

“The focus is not on interviewing people and rushing to hire a head coach. It’s to support Mike,” Fletcher said.

“I still don’t know truly what we have here,” Fletcher said.

Again in Philly, the changes weren’t enough to make the Flyer a championship contender.

The Flyers haven’t made the Stanley Cup Final since it lost to Chicago in 2010.

“I can’t speak for the last 10 years. most of these guys haven’t been here that long,” Fletcher said. “The process right now isn’t right. We have to get back to playing the right way.”

(©Copyright 2021 by The Associated Press. All Rights Reserved.)

The NHL season officially started back on October 12. In this article, we track all the NHL games today as
NFL・10 HOURS AGO
News 12

Gillies played with the Islanders from 1974 until 1986. He was elected to the Hockey Hall of Fame in 2002.
NHL・1 DAY AGO
Sportsnaut

P.K. Subban said he felt accountability to call out recent racist actions in hockey because he has established a platform to inspire better behavior.
NHL・5 HOURS AGO
Sportsnaut

The Pittsburgh Penguins are surging at the season's halfway point, but head coach Mike Sullivan says there is more work to be done
NHL・4 HOURS AGO
San Diego Union-Tribune

David Quinn is getting a second chance at the Olympics as the coach of the U.S. men's hockey team
HOCKEY・3 HOURS AGO

Ryan Pulock has now missed 22 games and counting with a lower body injury, but if there’s a silver lining to his absence, Peter Schwartz writes that it’s the emergence of Robin Salo and Noah Dobson.
NHL・2 HOURS AGO
Sportsnaut

Nicklas Backstrom scored on a breakaway 1:13 into overtime as the Washington Capitals rallied to defeat the visiting Ottawa Senators
NHL・1 DAY AGO

After a disappointing eight-game homestand that saw them win just three times, the Vegas Golden Knights begin arguably their most
NHL・1 DAY AGO
Sportsnaut

The Pittsburgh Penguins are proving that it’s never wise to count them out. Not in games. Not in the chase
NHL・4 HOURS AGO

The Florida Panthers, who are tied for the NHL lead with 61 points, have one glaring flaw. It’s their road
NHL・2 HOURS AGO
Sportsnaut

Nearly two years ago, Chris Kreider was a candidate to be traded before eventually signing a seven-year contract extension. Now
14 HOURS AGO
Sportsnaut

Los Angeles Kings coach Todd McLellan is convinced his team can match up with all the others in the NHL.
NHL・1 DAY AGO
USA TODAY

In a discussion about injuries, NHL great Bobby Orr once told Philadelphia Flyers defenseman Keith Yandle: “If you can skate, you can play.’’
NHL・10 HOURS AGO