Amon-Ra St. Brown is a stud – ‘and will be for as long as he wants to be in this league’ 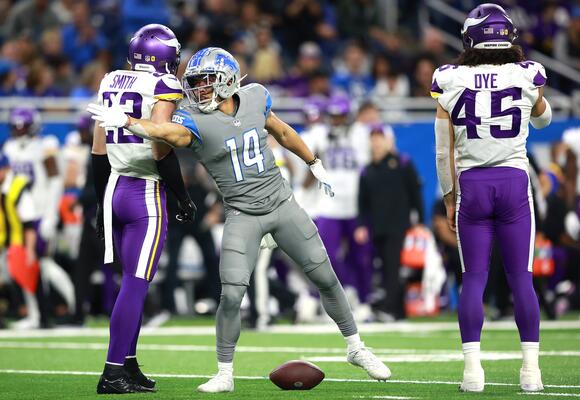 A few weeks ago, the Lions put their first win of the season in the hands of a rookie. He secured it on Sunday. The drought is over, and the rest of Amon-Ra St. Brown's career has just begun.

"I’ll be honest with you, we got a lot of trust in him," said Dan Campbell. "We have for a while. It's just trying to get him the ball here. He’s one of those guys that’s become pretty dependable for us."

As always, there's weight to Campbell's words. St. Brown earned the right to be Jared Goff's first option on the play that lifted the Lions over the Vikings in the final second of Week 13. Goff said it's a play the Lions have been running since camp "for that exact situation," only recently with a twist.

"A few weeks ago, we actually switched it and put St. Brown as that guy that’s going to catch that ball in the game-winning situation," he said. "Sure enough, it showed up."

If St. Brown's being honest, he couldn't believe it. Not that the Lions wanted to get him the ball -- that the Vikings were so willing to let him have it. They conceded the front of the end zone on Sunday's do-or-die play, and that's exactly where St. Brown was headed. Maybe Minnesota's defense wasn't worried about the rookie without a touchdown to his name. Maybe it should have been -- he already had a career-high nine catches on the day. The Vikings should have several years to adjust.

"As I broke in I was actually wide open, like, no way. So I was looking at Jared like, 'Please just throw it,'" said St. Brown. "As the ball was in the air I was like, 'This can’t take any longer,' because I know the DB is coming from behind. So I was just sitting there waiting.'"

St. Brown was sitting there waiting in the draft. The undersized receiver with oversized heart was still on the board in the fourth round. Finally his name was called by Detroit, 112th overall. And then he was sitting there waiting for his chance. As the Lions searched for someone, anyone, to make plays in the air, St. Brown caught the passes that came his way and blocked his tail off on the ground.

12 passes came his way on Sunday. He caught 10 of them for a career-high 86 yards, including four for 36 on the game-winning drive. All while blocking like a madman. St. Brown wound up playing 96 percent of Detroit's offensive snaps, more than any receiver in the game. There's a reason beyond his ball skills that the Lions trust him. But his ball skills don't hurt. His ball skills are real, along with his knack for getting open. The rookie knows where to go when his team needs him most.

It didn't take long for St. Brown's name to come up at Goff's post-game press conference. The veteran quarterback was so eager to answer he didn't let the reporter finish his question. This is what Goff does when he knows exactly what he wants to say.

What does it say about St. Brown...

The reporter pressed on, and now so did Goff, shaking his head to stake his ground: "He's a stud. He's a stud."

"A lot of confidence," said Goff. "He’s a stud and will be a stud for as long as he wants to be in this league. He’s been on our mind trying to get him the ball for probably the last six weeks now and I think today it showed up. Just trying to get him involved and get him the ball in space with what he can do with it. I’m pretty sure he jumped over somebody on the sideline there early in the game. He’s a freak."

The Lions need more freaks on offense. (They need more freaks, period.) They have one in D'Andre Swift, so long as he stays healthy. Maybe they have another in St. Brown. He's not explosive like Swift, but he's exceptionally strong for his size. His instincts are a separator. So is his heart. St. Brown can be a good slot receiver in the NFL, but he has a chance to be more for the Lions. It started a few weeks ago. A few years from now, we might remember this as the dawn of a special career.

"I think it boosts everyone’s confidence, the coaches, me, the quarterback, to know that I can make those plays at the end of the game," said St. Brown.

There was no Detroit Lions player who finished the 2021 season better than rookie wide receiver Amon-Ra St. Brown. In the final stretch of the season, he was named Offensive Rookie of the Month, was up for Rookie of the Week five times, set the Lions rookie record for receptions and receiving yards, and the Lions started designing trick plays around all the attention that St. Brown was garnering from opposing defense.
DETROIT, MI・5 DAYS AGO
FanSided

Jerry Jones reaction to loss: Dallas Cowboys owner sent a stern message that sure sounded like a direct shot at Mike McCarthy after Sunday’s loss. Let’s spare hyperbole: The Dallas Cowboys playoff loss on Sunday afternoon was nothing short of embarrassing. Dallas entered the postseason with its sights...
NFL・22 HOURS AGO
FanSided

3 Cowboys who should be fired after playoff disappointment

As the Dallas Cowboys struggled and underachieved in the NFL Playoffs, here are three names Dallas should consider moving on from. The Dallas Cowboys had an absolutely terrible evening as they completely fell on their faces when facing the San Francisco 49ers. San Francisco exposed just about every fault that Dallas had and took advantage of every single penalty and mental mistake the Cowboys made.
NFL・22 HOURS AGO
The Spun

FOX NFL broadcaster and former Cowboy great Troy Aikman didn’t seem to be too happy that he and Joe Buck were in Tampa Bay rather than Dallas. As Buck teased the next Sunday NFC playoff matchup between the Cowboys and 49ers on CBS, Aikman voiced his displeasure with some coded language.
NFL・1 DAY AGO

For 18 seasons, Ben Roethlisberger has been the face of the Pittsburgh Steelers’ franchise. He’s earned two Super Bowl titles
NFL・19 HOURS AGO
The Spun

Super Bowl 2022: The Tampa Bay Buccaneers are the reigning NFL champions, but who'll make the playoffs — and lift the Lombardi Trophy at the end of this season?
NFL・20 HOURS AGO
93.7 The Fan

There are a lot of parallels between the careers of quarterbacks Ben Roethlisberger and Russell Wilson. With Roethlisberger retiring, Wilson has reflected on Big Ben’s Hall of Fame career. Taking to Twitter last night, Wilson congratulated Roethlisberger on an incredible career. He called him a “legend” and “generational” –...
NFL・8 HOURS AGO
The Spun

Arch Manning, the nephew of Peyton and Eli Manning, is the top college football recruit in the country. The five-star quarterback has scholarship offers from nearly every major program. The class of 2023 product has been taking his time with his recruitment, though he could be getting closer to a...
COLLEGE SPORTS・1 DAY AGO
Sportsnaut

The Pittsburgh Steelers will have to address the quarterback position this offseason for the first time in 18 years. They won’t have that high of a draft pick after reaching the playoffs, so some have wondered if they could explore blockbuster trade scenarios. That does not appear to be the plan.
NFL・1 DAY AGO

Russell Wilson reportedly plans on exploring his options this offseason. While the Seattle Seahawks quarterback has said he plans on sticking around and competing for Super Bowls, NFL Network’s Ian Rapoport says otherwise. According to the report, Wilson plans on exploring his trade options this offseason. Several notable teams...
NFL・1 DAY AGO
ClutchPoints

Just like the rest of the Dallas Cowboys fan base, former team quarterback Tony Romo didn’t like how the Wild Card game against the San Francisco 49ers ended. It’s not that Romo is blaming anyone. The Cowboys could have done better in setting up the final play, and the referees might have some shortcomings as well. However, for the four-time Pro Bowler, it was just a frustrating ending for the home team and their fans who were hoping for that miracle to give them the victory.
NFL・19 HOURS AGO
The Spun

Tua Tagovailoa’s up-and-down performance through his first two NFL seasons has raised some questions about his status as a longterm franchise QB for the Miami Dolphins. But on Saturday, reports from NFL Network insider Ian Rapoport indicated that the team is sticking by their former No. 5 overall pick.
NFL・2 DAYS AGO
ClutchPoints

The Las Vegas Raiders overcame a myriad of obstacles to make the playoffs this season. As they prepare to face the Cincinnati Bengals, they will have to get serious about the team’s future regardless of the outcome. The most important factor of Las Vegas’ future is the Derek Carr situation.
NFL・2 DAYS AGO
Sports Illustrated

Jerry Jones's son discussed the rough scene at AT&T Stadium immediately after the game.
NFL・3 HOURS AGO
The Spun

Speculation about Jim Harbaugh’s potential return to the National Football League is continuing to grow on Sunday. Harbaugh admitted earlier this week that he appreciates the rumors swirling about him more than the ones that were swirling last year (when he was on the hot seat at Michigan). The...
NFL・1 DAY AGO
Sportsnaut

A number of NFL futures bets can be placed throughout the 2021 NFL season, but Super Bowl odds are where
NFL・1 DAY AGO
ClutchPoints

The Pittsburgh Steelers lost in disappointing fashion to the Kansas City Chiefs in the Wild Card round of the NFL playoffs. One of the biggest scapegoats for the loss was wide receiver Diontae Johnson, who had a few dropped passes in the blowout loss. Johnson did address his drops, responding to those who criticized him, both through the media and on social media. However, Johnson also pointed his finger at Steelers offensive coordinator Matt Canada for the offense’s lackluster effort against the Chiefs, via SteelersWire of USA Today.
NFL・2 HOURS AGO