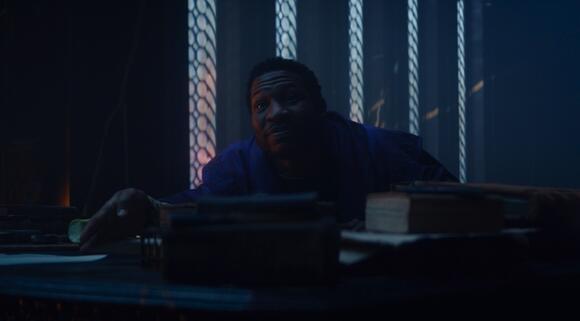 After a year of MCU Phase 4 stories, it’s clear that Marvel could have done a much better job with the Infinity Saga villains. We needed more than a decade and 20 movies to finally get to Thanos (Josh Brolin). And then we lost Thanos twice in the same film, with Marvel killing two variants of this iconic MCU villain. Comparatively, Phase 4 throws several big villains at us right from the get-go. They’re not just terrifying, they’re bigger and badder than Thanos ever was. The Avengers have no idea what’s coming their way, but we do. And a brand new Ant-Man 3 leak gives us our first look at Thanos’s big successor, Kang the Conqueror (Jonathan Meyers).

All the new Marvel villains

We explained after Loki — and again after What If…? and Eternals — why Kang is the scariest foe the Avengers might face. It’s not about the sheer power alone because Thanos with the Infinity Stones might be more powerful than Kang. The same goes for the Infinity Ultron in What If…? . Not to mention Strange Supreme (Benedict Cumberbatch). And Arishem (David Kaye) seems to be an even more terrifying threat than everyone else combined.

But considering everything we saw so far, it’s Kang who is probably the most difficult villain to beat. And we’re going to get the first real taste of Kang in Ant-Man 3 , which is set to be released in 2023. However, before we get to this early Ant-Man 3 leak, I’ll remind you what makes Majors’ character so terrifying.

All of these new Marvel villains could turn out to be even bigger threats to the Avengers than Thanos. We’ll put a pin in Infinity Ultron, however, whom The Ancient One (Jeffery Wright) managed to neutralize in What If…? . But we can add Wanda (Elizabeth Olsen) to the list of Phase 4 antagonists, as she’s about to experience some serious madness .

Technically, we saw Kang already. The He Who Remains version from Loki is what Kang looks like. Not to mention that the TV show’s finale gives us a statue of Kang at the new TVA that Loki (Tom Hiddleston) discovers. But it’s still not the same thing.

Fast-forward to early December, and the following Ant-Man 3 leak started circulating on social media. It’s an image of Ant-Man and the Wasp: Quantumania merchandising for the movie’s stunt team.

In it, we see Scott Lang’s (Paul Rudd) helmet from the Ant-Man suit, with a huge hole on one side. That’s a heartbreaking callback to the broken Iron Man helmet in Endgame .

But what’s more interesting is the reflection on the helmet. We’re probably looking at Kang in that image. As The Cosmic Circus explains, the leak suggests we’ll get a comic-accurate Kang costume in Ant-Man 3 . The Loki finale also hinted at Kang’s comic-based suit.

The reflection isn’t enough to reveal any big Quantumania spoilers. But we assume Scott Lang & Co. will embark on another Quantum Realm journey, where they’re likely to face-off against at least one Kang variant. The Quantum Realm is likely the place where the TVA operates, although that’s just speculation at this point.

Ant-Man 3 and Kang aside, the movie opens on July 28th, 2023, after Marvel’s recent calendar reshuffle. That means we’re a long way from seeing Majors play Kang in this particular movie. Needless to say, the character could also appear in Loki season 2 and other productions before then .

The post Ant-Man 3 leak gives us our first look at Marvel’s next scary villain appeared first on BGR .

A dead Marvel superhero might return in a new movie

Don't Miss: 10 Amazon deals you can't miss on Sunday: COVID tests, 99¢ Amazon Smart Plug, more Eternals is streaming on Disney Plus, which means you can finally watch the film from the comfort of your home. Whether or not you saw it in theaters, the advantage of streaming is that you can pause and rewind the film to catch all the details that you might have missed the first time around. While the Eternals plot needs plenty of fixes with the help of future MCU adventures, it's still a must-watch film. Eternals is the kind of early Phase 4 movie...
MOVIES・3 DAYS AGO
BGR.com

Doctor Strange in the Multiverse of Madness is the next big multiverse movie in the MCU and the next title set to hit theaters. We’ll have to wait until May 6th to see this story in cinemas, but the movie is already the most talked-about Marvel release of 2022. That’s because Doctor Strange 2 should deliver a multiverse adventure even bigger than No Way Home.
MOVIES・14 DAYS AGO
BGR.com

Fantastic Four release news might come sooner than we thought

Fantastic Four was one of the MCU projects that Marvel mentioned in July 2019, when it first revealed its upcoming Phase 4 titles. Since then, Marvel has continued adding TV shows and movies to Phase 4, but hasn't shared a release date for Fantastic Four. Thirteen months ago, we learned that Jon Watts will direct the film, and we assumed Fantastic Four‘s production wouldn't start until Spider-Man: No Way Home came out. Marvel trolled fans once again last May, reminding them that Fantastic Four is in the works. But the studio has yet to reveal the cast or release date for one of the most anticipated reboots coming to the MCU. However, there’s one exciting development suggesting that more Fantastic Four news might be closer than we thought.
TV SHOWS・5 DAYS AGO
COMICBOOKMOVIE.com

Following today's leaked behind-the-scenes shot of Tessa Thompson in her new Valkyrie outfit, some new promo art for Taika Waititi's Thor: Love and Thunder has been shared online. The images, which will most likely adorn merchandise packaging, tie-in books and the like closer to the movie's release, give us another...
MOVIES・14 DAYS AGO

The next time Marvel fans meet Thor, he’s going to bring a totally new fit to the MCU. And if his latest look adheres to the comics, Thor might actually be more under-powered than what you’d expect from the God of Thunder. What Happened? — On January 7,...
COMICS・6 DAYS AGO
thenerdstash.com

Thor 4, or Thor: Love and Thunder if you want to use its proper long-form title, has been highly anticipated since it was announced. Taiki Waititi took the franchise in a drastic new direction with Thor 3. It has been claimed by many involved that this move saved the franchise. Of course, one thing it was missing was Thor’s love interest, Jane Foster. Waititi has promised Thor 4 will be the best MCU movie ever, and not just because the Guardians of the Galaxy are involved. Jane Foster herself will return and even take up the mantle of the Mighty Thor in Thor 4. Recently, promo artwork for Thor 4 was released that gave us our first look at major characters in action!
MOVIES・13 DAYS AGO
GAMINGbible

Spider-Man 4 Needs To Give Us Michael Mando's Scorpion

Spoilers for Spider-Man: No Way Home contained in this article - read on at your own risk!. Spider-Man: No Way Home went as big as it’s possible for a Spider-Man movie to go. Three generations of webhead teaming up to battle a Sinister not-quite Six while the fate of the multiverse hangs in the balance? I still find myself clutching my pearls like a southern belle every time I think about it. This is not what Spider-Man movies were like when I was growing up.
MOVIES・11 DAYS AGO
COMICBOOKMOVIE.com

It's a New Year, and the next 358 days or so promise to be incredibly exciting for the Marvel Cinematic Universe. We'll spend time with lots of new and returning characters in theaters and at home, though one can only hope that 2022 is a better year for Marvel Studios' evildoers.
TV SHOWS・11 DAYS AGO

The MCU is all about secrecy and surprises, and though there are people out there that try to spoil movies and shows, most of us fans want to see the reveals for ourselves, and Marvel tried their best to make that happen. In the recent Hawkeye series that led us from Thanksgiving to Christmas, fans got a couple cool surprises that included the return of Black Widow’s sister, Yelena Belova, played by Florence Pugh, as well as big, bad villain Wilson Fisk, aka Kingpin, played by Vincent D’Onofrio.
TV SERIES・13 DAYS AGO