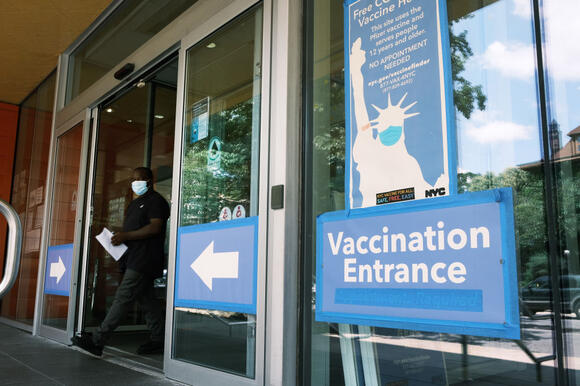 De Blasio said the aggressive measure, which takes effect Dec. 27 and which he described as the first of its kind in the nation, was needed as a “preemptive strike” to stall another wave of coronavirus cases and help reduce transmission during the winter months and holiday gatherings.

“Omicron is here, and it looks like it’s very transmissible,” he said in an interview on MSNBC. “The timing is horrible with the winter months.”

New York City has already put vaccine mandates in place for city workers and for indoor dining, entertainment and gyms. Nearly 90% of adults in the city now have at least one dose of the vaccine.

But de Blasio said the city must go further to combat another wave of the virus in New York City, once the epicenter of the pandemic. Some private employers have required employees to get vaccinated, but many others have not.

The mayor also announced that the rules for dining and entertainment would apply to children ages 5-11, starting Dec. 14, and the requirement for adults will increase from one dose of a vaccine to two starting Dec. 27.

De Blasio and Gov. Kathy Hochul held a news conference Thursday to announce New York state’s first five cases of the omicron variant. The number of coronavirus cases in the city has increased rapidly in recent weeks; daily case counts have increased more than 75% since Nov. 1.

De Blasio, a Democrat with less than a month left in office, said he was confident the new mandate would survive any legal challenges.

“We are confident because it’s universal,” he said of the mandate.

is this constitutional? and isn't this the way to try to force more people to get the vaccine that don't believe in it and with good reason?

A vaccine mandate for a variant they're not even sure the vaccine actually protects agianst.. makes sense.

didn't they just say this was unconstitutional and the government could not force a vaccine mandate? This is nothing but an excessive use of control and the people need to stand for their rights. Does no one see that before any major holiday or event we mysteriously get another "mutated form of the c word"?

With Plunging Enrollment, a ‘Seismic Hit’ to Public Schools

ORANGE COUNTY, Calif. — In New York City, the nation’s largest school district has lost some 50,000 students over the past two years. In Michigan, enrollment remains more than 50,000 below pre-pandemic levels from big cities to the rural Upper Peninsula.
CALIFORNIA STATE・16 HOURS AGO
The New York Times

NEW YORK — After Amazon employees at a massive warehouse on Staten Island scored an upset union victory last month, it turned the union’s leaders into celebrities, sent shock waves through the broader labor movement and prompted politicians around the country to rally behind Amazon workers. Now it also appears to have created fallout within Amazon’s management ranks.
STATEN ISLAND, NY・11 DAYS AGO
The New York Times

Firefighter Is Killed When Ceiling Collapses in Brooklyn House Fire

NEW YORK — A firefighter was killed after a ceiling gave way in a fire at a home in Brooklyn on Sunday afternoon and another person inside the home was also killed, city officials said.
BROOKLYN, NY・23 DAYS AGO