Should You Buy This Blue-Chip Dividend Stock?

The goal for most dividend investors is to allocate their hard-earned capital to stocks that are consistently growing, no matter what's going on in the world -- companies that boast stable businesses.

Alongside Home Depot , Lowe's (NYSE: LOW) is a leader in the home improvement retail sector. This bet on home ownership's part in the story of the American dream has paid off for the retailer. And for investors, the stock has raised its dividend 59 straight years, making it a Dividend King .

Lowe's is the epitome of what a dividend growth stock should look like, but let's dig in to determine whether the stock is a buy or a hold at this time. 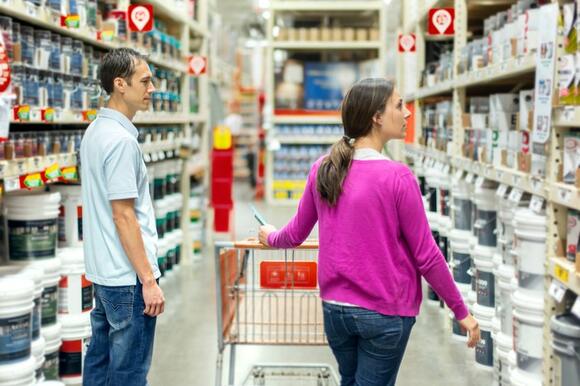 Lowe's reported $22.92 billion in revenue during the fiscal third quarter, up 2.7% year over year and exceeding the analyst consensus of $22.06 billion.

A 2.2% year-over-year increase in comparable-store sales and a slight increase in Lowe's store count to 1,973 as of Oct. 2021 fueled the growth. Inflation and big-ticket sales of appliances and flooring led to a 9.7% increase in the average ticket, according to CFO Dave Denton. But during the earnings call , he also noted that gain was offset by a 7.5% decline in transactions due to lower sales of small-ticket items and lumber to DIY customers.

And Lowe's increased efficiency over the past year led to a 240-plus basis point expansion to its operating margin to 12.2%. Management has been aggressively repurchasing shares too, which explains the staggering 8.2% year-over-year reduction in its weighted-average share count. When factoring in the company's higher revenue base, improved margins, and lower share count, it makes sense Lowe's was able to grow its non-GAAP diluted earnings per share (EPS) 37.9% to $2.73.

And based on Lowe's recently conducted Pro Pulse Survey, 80% of professional contractors expect home improvement demand to continue into next year. Given its recent performance and the strong outlook for the sector, analysts expect Lowe's adjusted EPS to increase 41.2% in fiscal 2021.

In a competitive and ever-changing retail environment, Lowe's is thriving. Because the average basket for Pro customers is much higher than DIYers, developing and maintaining good working relationships with that cohort is essential to the long-term success of the company. Fortunately, management has been catering to Pro customers with Pro sales up 16% year over year in the latest quarter.

And the company has positioned itself well in the age of e-commerce, as evidenced by the fact Lowe's.com sales were up 25%. This came on top of the 106% sales growth for Lowes.com in the same quarter last year.

Built on a foundation of financial strength

Lowe's is doing well operationally, but can the same be said of its financial position? Let's dig into the company's net debt-to-EBITDA ratio to answer this question.

Lowe's has $18.56 billion in net debt, and it generated $13.61 billion in trailing-12-month earnings before interest, taxes, depreciation, and amortization ( EBITDA ). This equates to a net debt-to-EBITDA ratio of 1.4, which is well within the acceptable range for a retailer of this scale.

And based on analysts' estimates for earnings of $11.94 per share this year against a dividend payout of $2.80 per share, Lowe's payout ratio of 23% leaves plenty of room for the dividend to sustain its decades-long growth streak.

On top of Lowe's robust fundamentals, the stock is also reasonably priced.

Lowe's forward price-to-earnings ratio of about 19 comes in below the home improvement retail industry's average of 24. With earnings growth expected to outpace the industry over the next five years as well, Lowe's and its 1.3% yield are an attractive buy for dividend investors .

10 stocks we like better than Lowes
When our award-winning analyst team has a stock tip, it can pay to listen. After all, the newsletter they have run for over a decade, Motley Fool Stock Advisor , has tripled the market.*

They just revealed what they believe are the ten best stocks for investors to buy right now... and Lowes wasn't one of them! That's right -- they think these 10 stocks are even better buys.

Luckin Coffee and Curiosity Stream are simply too cheap to ignore.
STOCKS・20 HOURS AGO
The Motley Fool

These 3 Stocks Are Timely Buys Amid the Market Sell-Off

A market correction is a great time to buy shares of solid companies with long-term track records at better valuations.
STOCKS・23 HOURS AGO
The Motley Fool

Investors want to hear what Elon Musk has to say.
STOCKS・15 HOURS AGO
The Motley Fool

Both companies are trading at 52-week lows, but there's reason for optimism ahead.
STOCKS・19 HOURS AGO
The Motley Fool

Most stocks are cheaper these days, but let's check out some names that are actually on sale for your next investment.
STOCKS・21 HOURS AGO
The Motley Fool

A recent filing with the SEC is causing investors to move out of the Bitcoin mining stock.
STOCKS・18 HOURS AGO
The Motley Fool

DraftKings could earn $1 billion or more -- if Morgan Stanley is right.
STOCKS・17 HOURS AGO
The Motley Fool

A subsidiary's IPO went even better than expected.
STOCKS・16 HOURS AGO
The Motley Fool

Inflation at 7%: 3 Top Dividend Stocks to Protect Your Money

The dollar ain't what it used to be. These dividend stocks can help.
STOCKS・1 DAY AGO
The Motley Fool

Not one, but two analysts cut their price targets on the popular stock Wednesday morning.
STOCKS・13 HOURS AGO
The Motley Fool

Buy the best when America is on sale.
STOCKS・23 HOURS AGO
The Motley Fool

The stock market decline could be providing excellent opportunities for long-term investors.
STOCKS・20 HOURS AGO
The Motley Fool

Valuation is important, but it isn't everything.
STOCKS・23 HOURS AGO
The Motley Fool

The "big money" on Wall Street seems to be dumping Tesla. The question is, why?
STOCKS・21 HOURS AGO
The Motley Fool

5 Large-Cap Stocks That Can Make You Richer in 2022