After a Successful IPO, Is It Too Late to Buy GlobalFoundries Stock?

GlobalFoundries (NASDAQ: GFS) continues its surge. The one-time foundry division of Advanced Micro Devices spun off as a separate company in 2009 and launched its initial public offering (IPO) in October.

Now, with the huge increase in the stock price, investors may wonder whether they waited too long to buy. Let's take a closer look at this semiconductor stock to see if the investment case for the stock still stands. 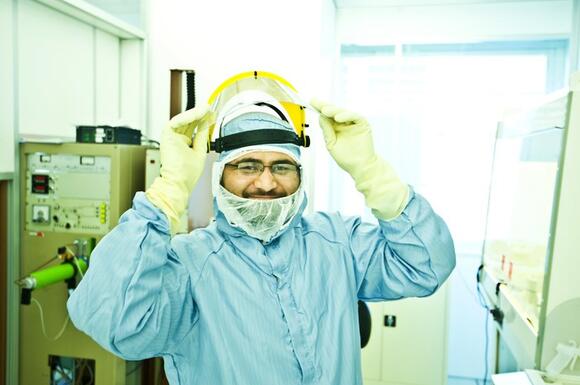 GlobalFoundries and its stock

GlobalFoundries, based in Malta, New York, is the fourth-largest foundry in the world. According to TrendForce, it claims approximately 6% of the foundry market and produces chips for a variety of purposes, including mobile devices, PCs, the Internet of Things, and communications. It also claims AMD, Qualcomm , Skyworks Solutions , and other tech companies as some of its clients.

The foundry industry has benefited from a substantial chip shortage. To that end, GlobalFoundries has pledged to spend an additional $1 billion to expand capacity. Competitors such as Taiwan Semiconductor (TSMC) (NYSE: TSM) and United Microelectronics (NYSE: UMC) have also announced plans to boost production.

Moreover, the company recently signed a deal with Ford Motor Company . Such a deal is critical as the global chip shortage has hit the auto industry particularly hard, idling facilities as automakers wait on essential semiconductors. These shortages have boosted semiconductor stocks across the board, a likely factor in the company's decision to go public finally. GlobalFoundries launched its IPO on Oct. 28, offering over 63 million shares at $47 per share.

In its short existence, GlobalFoundries stock keeps soaring . At just over $66 per share as of the time of this writing, the stock has risen by just over 40% in just over one month of trading. 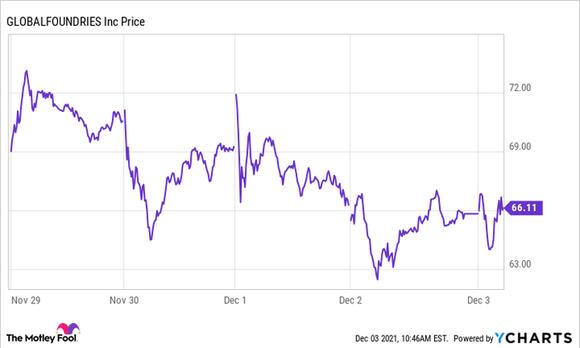 The earnings report may have confirmed investor inclinations to bid the stock higher. In its first earnings release on Nov. 30, GlobalFoundries reported that revenue came in at $1.7 billion, a 56% increase compared with the year-ago quarter. In 2018, the company embarked on a strategic change, hiring new management, refocusing research and development and capital expenditures, and bolstering customer relationships. Now with the current level of revenue growth, GlobalFoundries has begun to reap some of the benefits of these investments.

The revenue led to an adjusted quarterly profit of $34 million, up from a loss of $293 million in the same quarter last year. Limiting the increase in operating expenses to 15% helped the company turn profitable, even after paying $22 million in income taxes.

GlobalFoundries believes these increases can continue and has forecast fourth-quarter revenue at $1.82 billion at the midpoint. The company also predicts an adjusted net income between $50 million and $70 million in the upcoming quarter. Consequently, GlobalFoundries stock now sells at a price-to-sales (P/S) ratio of about 7. This places its valuation between that of its larger Taiwanese competitors, with TSMC trading at 12 times sales and UMC supporting a 4 P/S ratio.

GlobalFoundries has pulled off a successful IPO, and both massive revenue growth and a turn to profitability appear to confirm investor inclinations to bid the stock price higher. Also, despite a moderate sales multiple, the lingering global chip shortage should bode well for the stock's near-term prospects. As such, it is likely not too late to GlobalFoundries as an investment.

Both GlobalFoundries and its competitors plan substantial capacity expansions. This could lead to struggles for the stock once the shortage abates. However, with rising demand across the board for more chips, its long-term prospects appear promising.

10 stocks we like better than GLOBALFOUNDRIES Inc.
When our award-winning analyst team has a stock tip, it can pay to listen. After all, the newsletter they have run for over a decade, Motley Fool Stock Advisor , has tripled the market.*

They just revealed what they believe are the ten best stocks for investors to buy right now... and GLOBALFOUNDRIES Inc. wasn't one of them! That's right -- they think these 10 stocks are even better buys.

In this volatile market, finding solid businesses at a reasonable price is practically a luxury.
STOCKS・15 HOURS AGO
The Motley Fool

Want a side order of revenue growth to go with that dividend? We have three stocks for you.
STOCKS・15 HOURS AGO
The Motley Fool

Investors looking to benefit from this hot tech trend should take a closer look at these stocks.
STOCKS・16 HOURS AGO
The Motley Fool

The stock price is down 55% off its recent high. Is it time to buy?
STOCKS・17 HOURS AGO

The company might be going private soon.
STOCKS・15 HOURS AGO
The Motley Fool

Shares of Hostess Brands got a boost from S&P Dow Jones Indices, which adjusted one of its indexes.
MARKETS・15 HOURS AGO
The Motley Fool

Tesla crushed on earnings -- but also crushed investor hopes for new car models in 2022.
STOCKS・14 HOURS AGO
The Motley Fool

Both companies are trading at 52-week lows, but there's reason for optimism ahead.
STOCKS・1 DAY AGO

Some of last year's most promising growth stocks have fallen to the single digits right now.
STOCKS・15 HOURS AGO
The Motley Fool

Buy the Dip: 3 High-Risk Stocks to Consider Buying in 2022

Burned by the Stock Market? Consider These 3 ETFs Instead

Picking individual stocks isn't easy, and it can be time-consuming. Try this simpler solution instead.
ALEXANDRIA, VA・17 HOURS AGO
The Motley Fool

While high-growth stocks continue to be volatile, this gas and chemical company is delivering solid, undramatic returns.
STOCKS・16 HOURS AGO
The Motley Fool

It's down almost 20% so far in January, so it would have to meaningfully reverse course.
BUSINESS・15 HOURS AGO
The Motley Fool

The company recently reported earnings for the fourth quarter and full year of 2021.
STOCKS・14 HOURS AGO
Markets Insider

"This has been exactly how the great bubbles have broken," Jeremy Grantham said. "It's almost eerily classic."
STOCKS・16 HOURS AGO
The Motley Fool

Microsoft is getting all the big headlines, but these two stocks were also on the rise.
STOCKS・1 DAY AGO
The Motley Fool

The market has given investors a gift with these three stocks that used to trade for more than $100.
STOCKS・1 DAY AGO
The Motley Fool

This defensive basket is built to limit the effects of market volatility on your portfolio.
STOCKS・17 HOURS AGO