‘Spider-Man: No Way Home’ NFT Add-On Crashes AMC, Fandango Sites — What Does That Mean for Future of Metaverse Sales? 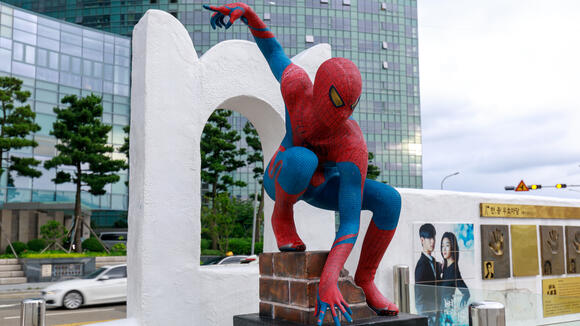 See: Most Successful Action Movies in the Past 10 Years
Find: Comic Books Through the Years — Is the Industry Dyi ng or Thriving, and Where Should You Invest?

Sony and AMC Theatres collaborated in a marketing promotion offering non-fungible tokens to the first 86,000 people who purchased advance tickets and were members of AMC’s Premiere, A-List or Investor Connect programs. No doubt, many people love Spidey, and the trailers for the latest flick look absolutely incredible. But the NFTs seem to account for a large part of the attraction and the flurry of advance ticket sales.

Quartz reported that scalpers started offering up the tickets at prices ranging from $200 to $25,000. Since that is far more than the market value of any movie ticket — even the next in the Marvel Cinematic Universe saga — it’s clear that people are paying for the NFT rather than the ticket. So far, Quartz reported, no one has bid on the higher-priced tickets, but the auctions are still open, with hopeful scalpers waiting to see just how valuable the public thinks these NFTs could become.

There is a catch to collecting the digital art, however. In order to collect the animated design, which comes in 108 variations, your ticket must be scanned at a movie theater. Once the buyer has their ticket scanned, they will receive an email with a code. To get their NFT, they’ll redeem the code on the Wax blockchain.

While Sony and Spider-Man may be leading the charge on this new trend, Warner Bros. is also introducing NFTs for the upcoming release of “The Matrix Resurrections.” These NFTs will be interactive, unlocking various functions as time goes on.

Mike Rubin, founder of Dreamium Labs, a Los Angeles-based NFT startup, told Quartz, “The next phase will be interactivity and more personalized fan engagement with their favorite movie characters.”

Hollywood executives are hoping these kinds of promotions can breathe new life into slumping ticket sales. The New York Times reported that theaters have lost 49% of their pre-pandemic customer base. And projections say that at least 8% will never return to theaters. But if pre-ticket sales for “Spider-Man: No Way Home” are any indication, movie theaters could face a brighter future.

This article originally appeared on GOBankingRates.com : ‘Spider-Man: No Way Home’ NFT Add-On Crashes AMC, Fandango Sites — What Does That Mean for Future of Metaverse Sales?

Hold on to your wallet. Due to inflation and prices surging for natural gas, heating oil, and other fuels, you will see a significant rise in your bills this winter. So if you've already opened your...
ENERGY INDUSTRY・1 DAY AGO
GOBankingRates

Social Security is getting a big change this year -- in fact, the largest one in almost four decades. See: Social Security Payment Schedule 2022 -- What Dates to Watch Out ForFind: How To Refinance a...
BUSINESS・12 HOURS AGO
GOBankingRates

How does a job earning more than $150,000 a year sound? The first step to pursuing a six-figure career is identifying which careers have that earning potential -- even if they don't start at that pay....
JOBS・11 HOURS AGO
WGNO

The black symbiote suit would eventually lead to the emergence of the character Venom.
DALLAS, TX・2 DAYS AGO

All the Spider-Man movies ranked, from No Way Home to Into the Spider-Verse

The reviews are in and Spider-Man: No Way Home, the latest Spidey escapade starring Tom Holland, has stuck the landing. It promised to be the biggest Spider-Man movie ever -- and delivered. But as a standalone movie, how does it actually compare to previous flicks? Taking into consideration it's necessary...
MOVIES・11 DAYS AGO
TheWrap

Sony/Marvel Studios’ “Spider-Man: No Way Home” is keeping its tight grip on the No. 1 spot at the box office, taking in $8.3 million on its fourth Friday in theaters for an estimated $30 million weekend that will push its overall domestic total past the $650 million mark.
MOVIES・12 DAYS AGO
The Daily

‘Spider-Man: No Way Home:’ What to expect in Marvel’s newest addition to the cinematic universe

Marvel’s newest addition to the Spider-Man trilogy has something for everyone, from the anxious student awaiting an inevitable rejection decision from university to the comic or movie buff who will enjoy a treasure trove of references. From here onward, please be warned that there will be spoilers. In summary...
MOVIES・14 DAYS AGO
meteamedia.org

‘Spider-Man: No Way Home’ multiversal journey is nostalgic and brings an exciting future to the Marvel Cinematic Universe

From all the movies that came out in 2021, “Spider-Man: No Way Home,” directed by Jon Watts, was the film I was looking forward to the most. I have not been pleased with the recent movies, “Homecoming” and “Far From Home,” due to the lack of consequences and standards that I love about Spider-Man, such as Peter trying hard to attend school on time and barely being able to afford his apartment/home. Yet, “No Way Home” fixed Tom Holland as Spider-Man for the better, which his recent movies have felt lackluster.
MOVIES・7 DAYS AGO

Which 'Spider-Man: No Way Home' Villain Are You?

"We are who we choose to be." "Don't you just love the scientific method?" "I'm not a bad person. Just had bad luck." "I will not die a monster." Which member of the Spider-Man crew would you want to get rid of?. MJ. Uncle Ben. Doctor Strange. Aunt May. Ned...
MOVIES・9 DAYS AGO
oberlinreview.org

Spider-Man: No Way Home, A Spectacular Conclusion To Every Spider-Man Trilogy

Editor’s Note: This review contains spoilers for Spider-Man: Far From Home. As a fan of the Marvel Cinematic Universe, I have been excited for Spider-Man: No Way Home since the cliffhanger ending of Far From Home two and a half years ago. I was incredibly excited for No Way Home, and it did not disappoint. Not only is it the best Spider-Man film I’ve ever seen and a conclusion that sticks the landing for Tom Holland’s Spider-Man trilogy, it is also an excellent conclusion to every prior Spider-Man franchise, an afterword that retroactively improves them.
MOVIES・13 DAYS AGO
TheWrap

“Spider-Man: No Way Home” will not be eligible for the BAFTA Film Awards after the film failed to meet eligibility requirements, the awards body announced Monday. The Sony superhero film and box office juggernaut was not uploaded to the online viewing platform BAFTA View prior to voting beginning, and as a result it failed to qualify. The first round of voting closed on Jan. 3.
MOVIES・10 DAYS AGO
Tufts Daily

Over the course of the winter break, “Spider-Man: No Way Home” (2021) became one of the most popular movies of the year. Released on Dec. 17, in roughly two hours and 30 minutes, the movie became a Marvel classic. From the fight choreography to the soundtrack, the jokes...
MOVIES・1 DAY AGO
Variety

Nearly 40 years after it first debuted, the holiday movie classic “A Christmas Story” is finally getting a sequel, with original star Peter Billingsley set to reprise his role and produce. Warner Bros. and Legendary are backing the production. “A Christmas Story Christmas” will be directed by Clay Kaytis (“The Christmas Chronicles”) from a script by Nick Schenk (“Cry Macho,” “The Mule”). Vince Vaughn is also producing, under the Wild West Picture Show Productions banner he runs with Billingsley. A box office failure when it first premiered in 1983, “A Christmas Story” has become one of the most beloved holiday movies in...
MOVIES・1 HOUR AGO
Rocky Mountain Collegian

The final installment in the current Spider-Man trilogy starring Tom Holland, “Spider-Man: No Way Home,” implements what fans have been asking for and appeals to multiple generations of Spider-Man fans. The excitement and anticipation around this movie among Marvel fans was surreal. Leaks and rumors of guest appearances...
MOVIES・1 DAY AGO
Variety

Akira Armstrong’s Pretty Big Movement dance company set out to destroy stereotypes in the dance world — and now that story is getting the Hollywood treatment in a new film. Set at Warner Bros. for HBO Max, “Pretty Big” is based on the true life story and the origin of Armstrong’s dance company, which is inclusive of bodies of all shapes, sizes and colors. Tina Mabry (“Pose,” “Women of the Movement”) has signed on to direct the project, co-writing the screenplay with Dan Steele (“Gossip Girl,” “Faking It”). The movie follows Armstrong, a young, plus-sized woman who takes matters into her own...
THEATER & DANCE・1 DAY AGO
Variety

Godzilla and the Titans Live-Action Series Set at Apple

Apple has ordered a live-action Godzilla series from Legendary Television, Variety has learned. The untitled series continues the story of the Legendary Monsterverse established in films like “Kong: Skull Island” and 2014’s “Godzilla.” Following the battle between Godzilla and the Titans that leveled San Francisco and the shocking new reality that monsters are real, the series explores one family’s journey to uncover its buried secrets and a legacy linking them to the secret organization known as Monarch. Monarch is a secret government entity that has played a major role in the Monsterverse franchise, working to cover up the existence of and defend...
TV SERIES・3 HOURS AGO
Motley Fool

The film has grossed over $1.5 billion in ticket sales worldwide. AMC makes just as much money from food and beverage sales as movie tickets. At the same time, AMC is losing hundreds of millions of dollars on the bottom line. AMC Entertainment Group (NYSE:AMC) was crushed at the pandemic...
MOVIES・3 DAYS AGO
Deadline

In a massive deal that expands on Legendary’s Monsterverse, Apple TV+ has ordered a new live-action series featuring Godzilla and the Titans. Following the thunderous battle between Godzilla and the Titans that leveled San Francisco and the shocking new reality that monsters are real, the untitled series explores one family’s journey to uncover its buried secrets and a legacy linking them to the secret organization known as Monarch. The series will be produced by Legendary Television and executive produced by co-creators Chris Black — who will also serve as showrunner — and Matt Fraction, alongside Safehouse Pictures’ Joby Harold and Tory Tunnell...
TV SERIES・3 HOURS AGO
Deadline

Will Packer Productions has tapped screenwriter Leon Chills (Spinning Out, The Wilds) to adapt Stan Parish’s novel Love and Theft for Universal Pictures. Published by Penguin Random House through their Knopf Doubleday imprint in 2020, Love and Theft is billed as a global romantic heist film set in Las Vegas, Mexico and Spain. It centers, per the publisher, on Alex Cassidy and Diane Alison, who develop an instant and undeniable chemistry when they meet at a party in Princeton, New Jersey. She’s a single mother, local fixture and owner of a successful catering company. He’s a single father and weekend homeowner—and leader of an...
MOVIES・7 HOURS AGO