On Saturday, Bitcoin (CRYPTO: BTC) crashed about 17% in less than 24 hours, going rom $57,000 to around $47,000, before partially recovering. Other altcoins also followed suit, in a wide crypto sell-off following a two tumultuous weeks for the markets.

"Flash crashes" like this have happened occasionally, especially in the volatile cryptocurrency markets, and there was no specific reason for Bitcoin's plunge. After all, Bitcoin just underwent a big update last month that should actually greatly enhance its utility. Still, cryptocurrencies are often grouped together with high-multiple tech stocks by many investors -- and those stocks have been hammered recently amid concerns over higher interest rates.

Whatever the reason, there was another big factor that exacerbated Bitcoin's plunge... and that same factor is also present in the stock market right now. Should stock investors be worried they'll be next? 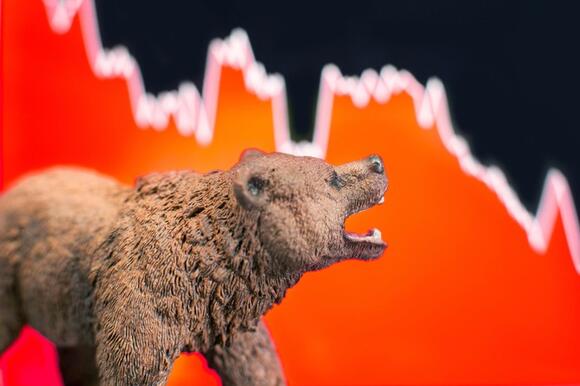 Before the sell-off, analysts were concerned about increased leverage in the Bitcoin futures market. What does this mean? That investors and speculators were using margin loans to buy more Bitcoin in hopes of a year-end rally. While buying any security on margin can enhance returns, when a security goes down, it has the opposite effect of augmenting losses.

In fact, margin levels in the Bitcoin market weren't just a December concern. Margin levels across Bitcoin exchanges have actually been elevated since late October. Back then, the amount of leverage exceeded the yearly high from back in April -- just before a massive 50% sell-off shortly thereafter.

Despite leverage being high and many analysts warning of a sell-off, that hadn't really happened until this weekend. Crypto analyst Arcane Research said in a report earlier this week that, "It is not common to see such a high open interest being sustained for such a long duration. This could suggest that the market is currently oversaturated with leverage."

Sure enough, Bitcoin's recent sell-off -- whatever the cause -- apparently triggered either panic selling or margin calls responsible for its  rapid decline on Saturday.

Could the same thing happen to the stock market?

While Bitcoin and other cryptocurrencies are quite popular, the stock market is obviously much, much bigger, and stocks can also be bought on margin. So could a year-end "flash crash" happen in the stock market too? We have obviously seen very rapid corrections in the recent past, including a near-20% drawdown in December 2018, and of course the fastest-ever correction as COVID-19 hit in March of 2020.

One reason for concern today is that margin loans have gone up a lot this year, rising to $936 billion, which is close to an all-time high and up 40% over last year, according to Yardeni Research. Depending on how leveraged one is, a material drop in stocks could trigger margin calls, leading to a very quick liquidation in stocks.

So, should one be worried about a crash? It's always something to be concerned about, but I also don't think there is reason to panic, especially if you have low- or preferably no-margin debt and a long time horizon.

First, it's possible widespread margin calls won't happen. While the levels of margin debt are near all-time highs again, they are still below the all-time high ratio when looking at debt as a percentage of the market cap of the overall market, as measured by the S&P 500 . The current level is 2.4%, still a good bit below the all-time high level of 3.5% set back in 2008. And for all the concern over the omicron variant, early indications are that symptoms are milder than previous strains of COVID -- although data is still coming in. That means economic lockdowns are unlikely.

Of course, 2008 isn't exactly a great period in the market with which to be compared. In addition, that 2.4% is higher than the roughly 2% levels seen before the COVID-19 crash. Furthermore, the ratio could go up if the S&P 500 falls more. For all the turmoil in high-growth tech stocks recently, the S&P 500 only sits about 4.3% below its all-time highs.

Yet even if a leverage-induced market crash does happen, a big market sell-off can also spell opportunity for those making regular contributions to their portfolio. Remember, those harrowing sell-offs from 2018 and 2020? Both proved to be terrific buying opportunities as stocks overshot to the downside due to that very forced selling from margin calls. So margin-caused sell-offs, while bad for those getting the calls, can be gold mines for Foolish investors that regularly invest and have a long time horizon .

All the more reason to live with in your means, invest regularly, and to not use much (or any) in the way of margin loans.

The EV upstart has fallen out of favor among more value-focused investors.
STOCKS・20 HOURS AGO
The Motley Fool

The e-commerce giant was the target of some mixed commentary courtesy of a Wall Street analyst, while also following the broader market lower.
STOCKS・23 HOURS AGO
The Motley Fool

Why Lemonade Stock Is Falling Today

You don't need a lot of money to seek fantastic returns with this trio of stocks.
STOCKS・4 HOURS AGO
The Motley Fool

5 Growth Stocks That Can Make You Richer in 2022

These fast-paced companies have the tools and catalysts to be moneymakers for patient investors.
STOCKS・9 HOURS AGO
The Motley Fool

Market is treating these great stocks like the red-headed stepchildren of Wall Street.
STOCKS・8 HOURS AGO
The Motley Fool

These Berkshire Hathaway-backed winners could supercharge your portfolio.
STOCKS・3 HOURS AGO

The Trump-affiliated software stock is already up roughly 23% this year.
STOCKS・20 HOURS AGO
The Motley Fool

Shareholders of these companies could see monster returns in 2022.
STOCKS・8 HOURS AGO
The Motley Fool

Find out why the market was on a downward trajectory Tuesday morning.
STOCKS・1 DAY AGO
The Motley Fool

The market hit more turbulence on Tuesday.
STOCKS・20 HOURS AGO
The Motley Fool

Why Apple Sank Along With the Stock Market Today

It's not the "A" tech stock investors were clamoring for on the day, plus there was some discouraging legal news for the company.
MARKETS・20 HOURS AGO
The Motley Fool

Here's why Ethereum has lost over 30% in two months.
STOCKS・6 HOURS AGO
Seekingalpha.com

3 Reasons Why GREK May Outperform The Stock Market

Exceptional country GDP growth rate, reaching 8.5% in 2021 while 2022 projections remain in the ballpark of 5%. During the past few weeks, the situation hasn't been the best in the basic stock indices of the U.S. stock exchange. As investors are rebalancing their portfolios towards more defensive holdings, Dow Jones but especially NASDAQ have suffered. While I personally believe that there are still very noteworthy growth companies available at a much more appealing price than in the beginning of the year, I think that we can agree that extreme volatility doesn't make stock investors very comfortable. So, except for the case that someone is writing calls, therefore benefiting from the increased volatility, I believe that investors should seek for yields elsewhere. And by elsewhere I mean overseas.
STOCKS・17 HOURS AGO
The Motley Fool

Why StoneCo Stock Is Tumbling Today

A Profitable High-Growth Stock With a $21.5 Billion Opportunity

The company has grown by winning over the end users, not their bosses. That's impressive.
STOCKS・7 HOURS AGO
The Motley Fool

2 Beaten-Down Stocks That Could Rally in 2022

Don't count these stocks out yet.
STOCKS・3 HOURS AGO