Looking at stocks that have crushed the market can give investors mixed feelings. Some may have owned the stock along the way and benefited from appreciation. Others may have missed out and can only look back in regret.

Shopify (NYSE: SHOP) has hammered the market, returning more than 340% and 3400% over the last two and five years, respectively. While no one can go back and purchase shares, investors may have a second chance with Lightspeed (NYSE: LSPD) . It provides point-of-sale systems (POS), e-commerce software, and other tools necessary to run a business. Can it challenge Shopify over the next decade? 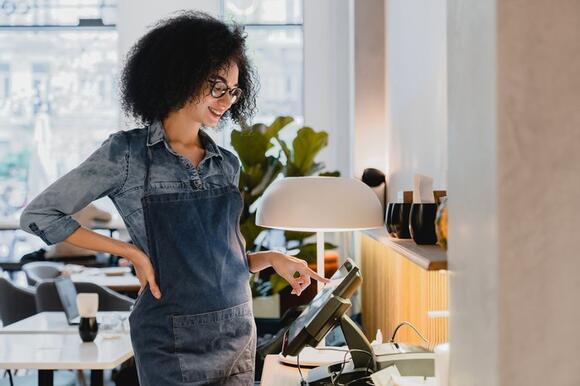 Lightspeed does not limit itself to just commerce like Shopify does. Instead, it operates three segments: commerce, restaurants, and golf. For golf, it provides tee-time management and restaurant POS streamlining course operations. Additionally, its software can be used on a mobile device so beverage carts don't need additional equipment. It has signed more than 1,200 courses worldwide, including Florida's Wellington National Golf Club, a top 75 private golf course.

The restaurant industry can be tricky in today's landscape; customers want the flexibility to order in-house, pick up, or get their meal delivered. Lightspeed has its clients covered with many solutions. It is integrated with UberEats and DoorDash and plugs into its POS solution. One of Lightspeed's unique solutions is letting restaurant customers order and pay from their phones, speeding up the ordering process, and reducing the need for excess waiters. Loyalty programs aren't only for large restaurant chains; even the humblest establishment can create a rewards system through Lightspeed.

Lightspeed's largest segment is retail, where it competes with Shopify. In general, Shopify is focused on e-commerce and supports a physical presence as well. Lightspeed runs everything through its physical POS, making it a great option for enhancing brick and mortar stores' operations and providing an omnichannel presence. Still, Lightspeed's solution gives its users many features, like gift cards that are accepted online and in-store, POS integrated inventory, and loyalty programs.

Shopify is larger, but Lightspeed seems to be growing quicker

Explosive growth in the e-commerce space was common during last year because of COVID-19. Now, many companies are struggling against tough comparisons. Lightspeed is not experiencing these hardships and is growing, well, at the speed of light. Its second-quarter revenue ending Sept. 30 increased 193% over the previous year. In total, Lightspeed's revenue was $133 million with subscription sales making up 45%.

Lightspeed has no customer-concentration risk and is diversified across more than 100 countries and 156,000 customer locations. Sixty-two percent of revenue comes from retail and the other 38% is derived from the restaurant and hospitality business. Worldwide expansion is already underway, as 47% of revenue is sourced outside North America.

For its fiscal year ending March 31, 2022, Lightspeed is expecting revenue between $520 to $535 million, representing 138% growth at the midpoint. For comparison, Shopify's Q3 revenue was $1.1 billion alone and grew 46% year over year. However, Shopify's split between transaction and subscriptions revenue is different than Lightspeed's.

Source: Lightspeed and Shopify. Values in millions of dollars. Does not include Lightspeed's hardware revenue. 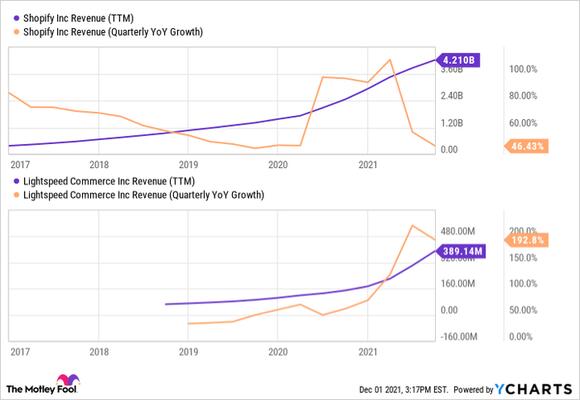 If Lightspeed can mirror Shopify's chart, the stock will be a huge win. Lightspeed is also cheaper than Shopify; it trades at a 15 price-to-sales (PS) ratio versus Shopify's 44. For a stock with 100% plus growth, a PS ratio of 15 is not an expensive price to pay.

Lightspeed and Shopify have many similarities: Both are Canadian companies that are led by founders and help businesses transition to the digital age. If Lightspeed can grow and perform like Shopify's stock, investors have a lot to be excited about. Tailwinds are blowing in e-commerce's favor and for modernizing restaurants.

However, Shopify is an established business and will be difficult to dethrone. Lightspeed can make itself a name by providing unique solutions, but catching Shopify seems unlikely. Lightspeed still presents many captivating prospects and could be a smart buy if the allocation is kept at a level where a stock failure will not sink a portfolio.

10 stocks we like better than Lightspeed POS Inc.
When our award-winning analyst team has a stock tip, it can pay to listen. After all, the newsletter they have run for over a decade, Motley Fool Stock Advisor , has tripled the market.*

They just revealed what they believe are the ten best stocks for investors to buy right now... and Lightspeed POS Inc. wasn't one of them! That's right -- they think these 10 stocks are even better buys.

Ford made a lot of money off of Rivian. But what if Ford decides to cash in those chips?
STOCKS・23 HOURS AGO
The Motley Fool

Why You Should Buy This Undervalued Stock Before Everyone Else Does

Investors looking for reliable retirement income should consider these stocks for their portfolios.
STOCKS・3 HOURS AGO
The Motley Fool

Make it your goal to acquire high-quality dividend stocks that can grow over time; here are five great examples.
STOCKS・1 DAY AGO

This Start-Up Could Be the Future of Drone Delivery

Zipline is delivering medical supplies in less than 30 minutes.
ELECTRONICS・5 HOURS AGO
The Motley Fool

Buying the Dip? 1 Risk to Avoid and 1 Tool to Use

Price anchoring can negatively bias your decisions whereas dollar-cost averaging can remove a price bias.
STOCKS・5 HOURS AGO
The Motley Fool

Brick and Mortar vs. E-Commerce: Which Retailers Are Thriving Now?

E-commerce has surged during the pandemic, but there are also brick-and-mortar retailers benefiting from the trend.
RETAIL・6 HOURS AGO
The Motley Fool

History suggests market dips are a great time to buy stocks, but not all individual companies are created equal.
STOCKS・7 HOURS AGO

This Semiconductor Company Expects to Grow 20% in 2022

ASML just reported strong earnings, but its guidance is questionable.
MARKETS・7 HOURS AGO
The Motley Fool

Can Extreme Leverage Crash the Crypto Market in 2022?

How does leverage play into the volatility discussion in the crypto world?
STOCKS・7 HOURS AGO
The Motley Fool

Why Silvergate Capital Stock Continued to Gain Ground on Thursday

This analyst says it's time to buy Silvergate stock, albeit with not as much upside as it thought before.
STOCKS・1 HOUR AGO
The Motley Fool

AMD: 1 Reason to Sell and 3 Reasons to Buy

One analyst downgrades and reduces the price target for AMD.
STOCKS・3 HOURS AGO
The Motley Fool

My Favorite Consumer-Goods Stock for 2022

This scrubs maker has the potential to skyrocket over the next decade.
STOCKS・6 HOURS AGO
The Motley Fool

The e-commerce giant was the target of some mixed commentary courtesy of a Wall Street analyst, while also following the broader market lower.
STOCKS・1 DAY AGO
The Motley Fool

Are the Nasdaq's 3 Worst-Performing Stocks Ready to Bounce Back in 2022?

Is it time to buy these beaten-up Nasdaq stocks before they start growing again?
STOCKS・5 HOURS AGO
The Motley Fool

The recent decline in tech stocks could present some great buying opportunities for investors.
STOCKS・2 HOURS AGO
The Motley Fool

Will Workhorse Stock Recover in 2022?

The electric vehicle maker's stock fell 78% in 2021.
ECONOMY・6 HOURS AGO
The Motley Fool

My Top 2 Dividend Stocks for February

These two stocks increase dividends per share and have room to accelerate that growth.
STOCKS・7 HOURS AGO
The Motley Fool

5 Charts to Remember if the Stock Market Crashes in 2022

Lessons from the past can guide investors if history is repeating.
STOCKS・1 DAY AGO
The Motley Fool

These three top growth names are already down a lot and trade at fair prices, but could become really huge bargains if the market falls more amid rising interest rates.
STOCKS・2 DAYS AGO