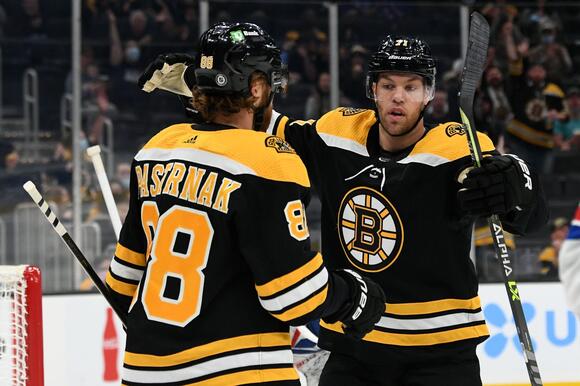 While top-line left winger Brad Marchand was out serving a three-game suspension, the Bruins seem to have stumbled into some effective new line combinations. With the success that the Bruins’ top six forwards have had in their new arrangement, the dilemma Boston faces now is how to reshuffle the lineup when Marchand returns.

While together against Detroit, Nashville and Tampa Bay, the top-line combination of Taylor Hall, Patrice Bergeron and David Pastrnak excelled. And the new-look second line of Erik Haula, Charlie Coyle and Craig Smith found a way to produce in both games in which they were together.

Bruins assistant coach Joe Sacco, who has taken over the primary coaching duties with Bruce Cassidy in COVID protocol, wouldn't say for sure how the Bruins’ first two lines would be configured now that Marchand will be inserted back into the lineup for the Bruins' Wednesday night game in Vancouver.

"Well Brad, you know he’s coming back next game and we’ll have to meet and talk about the lines with Butch [Cassidy] and see where we want to go," Sacco said. "But as far as Taylor goes, hopefully he can just continue to pick up where he left off with whoever he’s playing with.

"He [Hall] can play like that regardless of who he’s playing with. And he just has to keep that mindset."

The Bruins had a 1-1-1 record in the absence of Marchand, but have been playing better hockey than that outcome would suggest.

Pros and cons of returning to Bruins’ usual top-six configuration

The obvious and most likely scenario for the Bruins in their game Wednesday against the Canucks would be to return Marchand to left wing on the first line alongside Bergeron and Pastrnak. That option comes with some obvious pros, but also a couple cons as it relates to the usual second-liners.

For argument's sake, let's start with the cons:

Con 1: It splits up a Hall-Pastrnak combo that has shown promise

Putting Hall with Bergeron and Pastrnak clearly elevated Hall’s play. He found chemistry in particular with Pastrnak, whom he set up for that line’s one goal while Marchand was out.

Looking at the analytics for their stretch together, Natural Stat Trick has the trio at 3.57 expected goals for in their 44 five-on-five minutes and just 1.24 against, even though in actuality they only found the scoresheet once, on a power-play goal by Pastrnak against Detroit. They out-attempted opponents 70-36 when on the ice. Notably, Pastrnak also rang the post on several occasions in that stretch.

“I think we've played well and controlled play,” Hall said about his line. “We weren't able to produce but those are great players. I'm relishing the opportunity.”

Con 2: It splits up a Haula-Coyle combo that has clicked

The reintroduction of Marchand to the Bruins’ lineup will cause a ripple effect with the newly formed lines the team has put together and had success with over the three games. The second line of Erik Haula, Charlie Coyle and Craig Smith will need to be broken up in some way, despite that combination bringing out the best play we've seen from Haula this season.

Haula had just a goal and two assists through his first 18 games (a 0.17 point-per-game average), but he's now recorded two assists in the last two games while alongside Coyle and Smith.

Haula made a creative pass to set up a goal by Brandon Carlo in Nashville, and sent another impressive pass through the crease for a Coyle back-door goal against Tampa Bay.

The stats also bare out that the Haula-Coyle-Smith combination was effective at creating quality chances. In the trio's 25 five-on-five minutes together, they created eight high-danger chances compared to just one surrendered to their opponents. The Bruins also had a 33-16 advantage in shot attempts when they were on the ice.

Commenting on Haula ramping up his play, Sacco said, “He’s playing better, there's no question. I think it shows in his game. He’s around the net, he’s on pucks, he’s competing, and so like we said, his game is heading in the right direction.”

Coyle also spoke about his previous experience playing with Haula in Minnesota: “I was trying to think back actually. We might have saw a few shifts together, but I played with him on his team enough to know how he is as a player, his tendencies and all of that. He’s got great speed, so it’s nice when it clicks right away when you find new linemates and you get rewarded.

“We’ll see what happens when Brad gets back,” Coyle finished.

Pro: The “perfection line” can get back to work

The pros for returning to the usual lines are fairly obvious. It keeps an already proven and effective top line together, one that has arguably been the best in the NHL over the last several years. If Hall can keep up his recent first-line level of play on the second line -- and that would be the challenge to him -- this is still the team's best option.

There is also the possibility of keeping Hall and Pastrnak together with Bergeron and putting Marchand on the second line, but given that the Bruins haven't split up Marchand and Bergeron in a decade, that seems highly unlikely.

For more line talk, including a more creative (though admittedly unlikely) possibility and a look at what happens next with Jake DeBrusk, check out the latest episode of The Skate Podcast, which you can listen to at the top of this post or by clicking here .

BOSTON (CBS) — Brad Marchand is a man of the people — and one funny guy. The Bruins forward had some fun with a Boston fan ahead of Thursday night’s game against the Capitals, in a way that only Brad Marchand could. As he made his way off the ice following pregame warmups, Marchand started giving out his usual high-fives and fist bumps to the fans there to greet him. One young fan was recording it on his phone, which is when Marchand decided to have his fun. He snagged the phone as he walked through the tunnel and recorded a rather...
NHL・2 DAYS AGO
CBS Boston

BOSTON (CBS) — The Bruins earned a spirited 4-3 win over the Washington Capitals on Thursday night, but it may have come at a cost. Brad Marchand had to leave the game in the second period after taking a hit from behind by Washington’s Garnet Hathaway, which head coach Bruce Cassidy called a “cheap hit.” Marchand suffered an upper-body injury on the play, which occurred a little more than halfway through the second period. The Bruins winger went into the corner to play the puck, and Hathaway lined him up and delivered a crushing blow right between the numbers, sending Marchand...
NHL・2 DAYS AGO
985thesportshub.com

David Pastrnak scored the eventual game-winning goal in the third period, lifting the Boston Bruins to a 3-2 win over the Winnipeg Jets at TD Garden on Saturday afternoon. The go-ahead tally came on a power play just 3:59 into the third period. A shot attempt by Brad Marchand bounced off a Jets skate and right to Bruins defenseman Matt Grzelcyk, who fed Pastrnak right in his sweet spot. The winger did the rest, burying the one-timer to give the B’s the lead for good.
NHL・1 DAY AGO

The Bruins kept from sliding out in the slippery environs of late January, twice coming from a goal down to beat the Winnipeg Jets, 3-2, in a Saturday matinee. Making the difference? Who else but the hottest goal-scorer in the league, David Pastrnak. His one-time, power-play rocket from the left circle at 3:59 of the third period made TD Garden explode, and stood up as the winner.
NHL・1 DAY AGO
NESN

BOSTON — The Bruins kept their impressive home streak alive Saturday as Boston hosted the Winnipeg Jets at TD Garden and, after falling behind by one goal two different times, overcame it for a 3-2 victory. The Bruins, who now have won 10 of their last 12 games, improve...
NHL・1 DAY AGO
NESN

The Bruins continue to show their response. The new second line continues to be a big part of that. David Pastrnak now has 11 goals and 14 points in Boston’s last 10 games, adding a go-ahead blast on the power play against Connor Hellebuyck after the Winnepeg goalie came up huge for his team in the second period.
NHL・1 DAY AGO
hockeyjournal.com

Bruins Brunch: Marchand bounces back, Pastrnak on fire and honoring an icon

The Boston Bruins soared into the week with an 8-1 record since Jan. 1 and prepared to face the Carolina Hurricanes on the night the team retired Willie O’Ree’s No. 22 as the man who broke the NHL’s color barrier in 1958. The pregame ceremony was the...
NHL・22 HOURS AGO

The Boston Bruins rebound with a 3-2 win over the Winnipeg Jets. David Pastrnak led the offense and scored the go-ahead goal in the third period. Bruins goaltender Tuukka Rask allowed a quick goal in the first period but steadied the ship shortly after, making 21 saves in net. Meredith...
NHL・1 DAY AGO
NBC Sports

The decision to remove David Pastrnak from his usual first line spot to second-line right wing has not only jumpstarted his own offensive production in a huge way, it's also given the entire Boston Bruins forward group a much-needed boost of scoring depth. Pastrnak's hot streak continued Thursday night when...
NHL・2 DAYS AGO
Audacy

The NHL season officially started back on October 12. In this article, we track all the NHL games today as
NFL・1 DAY AGO

Gillies played with the Islanders from 1974 until 1986. He was elected to the Hockey Hall of Fame in 2002.
NHL・1 DAY AGO
WFAN Sports Radio

’When you saw Clark Gillies, you thought Islander’: Head coach Barry Trotz and the team react to the unexpected death of a franchise legend.
NHL・1 DAY AGO
Sportsnaut

LOS ANGELES (AP) — Playing the second game of a back-to-back set, the Colorado Avalanche looked tired. They weren’t able to bombard the Los Angeles Kings with their typical offensive brilliance, finding themselves on the wrong side of a 14-shot disparity. And they still won. Kiefer Sherwood scored his first goal in nearly three years, […]
NHL・2 DAYS AGO

Leon Draisaitl had two goals and two assists, Evan Bouchard also scored twice and the Edmonton Oilers came from behind to snap a seven-game losing streak with a 5-3 victory over the Calgary Flames
NHL・1 DAY AGO
Sportsnaut

Nicklas Backstrom scored on a breakaway 1:13 into overtime as the Washington Capitals rallied to defeat the visiting Ottawa Senators
NHL・1 DAY AGO
Sportsnaut

The Winnipeg Jets activated captain Blake Wheeler from long-term injured reserve prior to Saturday’s game at Boston. Wheeler, 35, had
NHL・1 DAY AGO