Benitez given 'full support' by Everton as team flounders 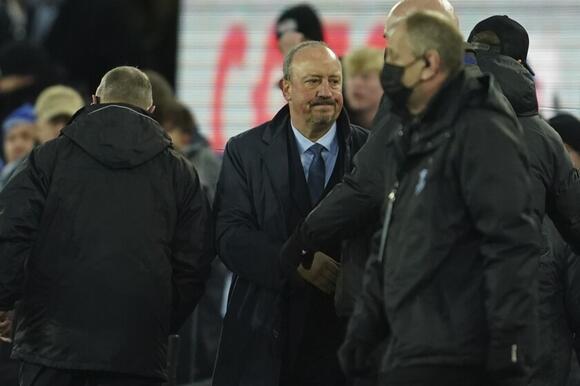 Rafa Benitez was given the “full support” of Everton's board on Monday amid a drastic downturn in the team's results in the Premier League.

The backing came on the day Everton hosts Arsenal as the team looks to bounce back after failing to win any of its last eight games in the league, a run that has dropped the team to 16th place — five points above the relegation zone.

The club's director of football hasn't survived, though.

Marcel Brands "has left his post," Everton said, after 3 1/2 years at Goodison Park during which he oversaw an outlay of close to 300 million pounds ($400 million) on signings.

That failed to translate into on-field success and with financial fair play restrictions hitting the club hard, Everton spent only 1.7 million pounds ($2.25 million) in the summer transfer window — the only one under Benitez so far.

“A strategic review of the football structure will now take place which will inform the best model for the club to proceed with in the long term," Everton said in a statement.

“In the meantime, the owner and board of directors will continue to provide our manager, Rafa Benitez, with their full support.”

Brands, who signed a new three-year deal in April, was the target of abuse from fans as Everton lost 4-1 to local rival Liverpool last week.

He spoke with the board on Friday and agreed to step down.

“This decision has taken some time and some consideration and was one of the most difficult I have faced in my career," Brands said.

“The board and I agreed that there is a clear difference in the vision and direction for this beautiful club and, with that in mind, the decision was taken," he said.

Brands said he is “convinced that there is enough quality to improve the current situation quickly.”

A drone interrupted play at Brentford, we had a late, late winner at Old Trafford and Newcastle dug in for victory on an eventful afternoon
PREMIER LEAGUE・2 DAYS AGO
San Diego Union-Tribune

Everton goalkeeper Jordan Pickford believes the players are up for the fight as they find themselves mired in a relegation battle.The 1-0 defeat at home by Aston Villa was their 10th in 14 league matches and the slide towards the bottom of the table has become an unthinkable but glaring reality for a club who have not been relegated since 1951.With his side now just four points outside the bottom three, when the Premier League resumes after the international break caretaker manager Duncan Ferguson faces a must-win game at fellow strugglers Newcastle.The former Toffees striker, taking interim charge during the...
PREMIER LEAGUE・2 DAYS AGO
The Independent

Everton are taking Aston Villa at Goodison Park this afternoon as the Toffees begin life after Rafa Benitez. The Spanish manager was sacked following a dismal run of results which have left them 16th in the Premier League with only five wins all season, and it is down to caretaker manager Duncan Ferguson to arrest the slide while the club searches for a permanent replacement. Villa meanwhile are enjoying life under Steven Gerrard, and victory today would lift them into the top half of the table at least temporarily before this afternoon’s matches. The obvious sub-plot is Gerrard vs Ferguson,...
PREMIER LEAGUE・2 DAYS AGO
The Independent

Rafa Benitez is gone from Goodison Park, but reminders of him remain. Everton began life after their most controversial managerial appointment with defeat to a side managed by his greatest captain, with a goal made by a player he sold and conceded in a manner that felt all too familiar on the blue half of Merseyside.Steven Gerrard had an excellent record against Everton as a player. A first visit in management brought Aston Villa victory, aided by an assist from Lucas Digne, the left-back Benitez dropped, criticised and sold, and from a corner: Everton’s habit of being breached at set-pieces...
PREMIER LEAGUE・2 DAYS AGO
The Independent

An hour after the final whistle had blown and Aston Villa had inflicted Everton’s 10th defeat in 13 games, hundreds had been reduced to dozens, but they were still protesting. A week of one sacking concluded with supporters asking for more. “We want our club back,” read one flag. “Sack the board,” came a chorus heard time and again. Before kick-off, a plane flew over Goodison Park with a banner declaring “22 years of failure, Bill”.The supporters who threw the bottles that hit Lucas Digne and Matty Cash were revolting. Far more were in revolt. Yet whereas the calls for...
PREMIER LEAGUE・21 HOURS AGO
The Independent

Emi Buendia’s first-half header earned Aston Villa a narrow win over Everton at Goodison Park as Duncan Ferguson’s second spell as caretaker manager ended in defeat in the Premier League on Saturday. The Villa forward rose to meet a corner from former Everton defender Lucas Digne on the stroke of half-time, before the returning Digne and Matty Cash were hit by a plastic bottle thrown by a home fan from the stands. Ben Godfrey had a header cleared off the line by Tyrone Mings as Everton pushed for an equaliser, before Dominic Calvert-Lewin squandered a chance from six yards as...
PREMIER LEAGUE・2 DAYS AGO

Everton have confirmed that police arrested a fan at Goodison Park after Aston Villa players Matty Cash and Lucas Digne were hit by a bottle as they celebrated a goal in front of the home supporters on Saturday. After Emi Buendia glanced in Digne’s cross to give Aston Villa the lead shortly before half-time, the visiting players celebrated in the corner in front of the Everton fans.Several plastic drinks bottles were thrown at the Aston Villa players from the stands as they celebrated the goal. The majority of those bottles missed the Villa players, but Cash and Digne went down...
PREMIER LEAGUE・2 DAYS AGO
The Independent

Duncan Ferguson’s second spell as Everton caretaker manager got off to the worst possible start with the club facing a likely investigation into a bottle-throwing incident during the 1-0 defeat to Aston Villa.Former Liverpool captain Steven Gerrard’s first appearance at Goodison Park as head coach barely featured as a sub-plot with the focus all on the ex-Toffees striker taking charge following the sacking of Rafael Benitez.But, like many occasions during his playing career, it was Gerrard who left the ground smiling after Emiliano Buendia’s match-winning header in first-half added time.The Villa boss was less happy about the incident which saw...
PREMIER LEAGUE・2 DAYS AGO
The Guardian

We are rapidly heading towards the end of January and Burnley have still played just 17 of their 38 Premier League games. Sean Dyche’s men have only played two league matches since the middle of December due to Covid and injury problems.Burnley currently sit bottom of the table but know positive results in their games in hand could prove vital in their bid to avoid the drop.Meanwhile, Tottenham’s late win at Leicester on Wednesday saw them leapfrog Arsenal, so this match is equally crucial for Mikel Arteta’s side if they are to keep pace in the top four race.Burnley have...
PREMIER LEAGUE・1 DAY AGO
San Diego Union-Tribune

The Tottenham Hotspur dressing room has been just like fans’ groups in the last two days. The players have been giddily sharing videos of the last few minutes at Leicester City. Of particular joy has been Antonio Conte going to hug a steward, which has naturally been pointed out to the manager.A glee has totally replaced a developing sense of gloom. The fretful questions people around the club had been asking have been totally washed away. They’re no longer wondering whether Conte could really walk, or if this is the most difficult situation he’s walked into.The talk is now only...
PREMIER LEAGUE・2 DAYS AGO
The Independent

Crystal Palace vs Liverpool prediction: How will Premier League fixture play out?

Crystal Palace’s newly rejuvenated squad have adapted to Patrick Vieira’s ideas quicker than many people thought they would.The departure of Roy Hodgson promised more free-flowing football but risked relegation from the Premier League.FOLLOW LIVE: Team news and all the action as Crystal Palace host LiverpoolSo far, Vieira has tipped the scales in his favour but just one league win in five games will leave him desperately craving a victory to move further away from the drop zone - they currently sit 11 points clear of 18th place Norwich.Palace face an incredibly difficult task of welcoming Liverpool to Selhurst Park this...
PREMIER LEAGUE・1 DAY AGO
San Diego Union-Tribune

Ralf Rangnick loved the Old Trafford atmosphere, Manchester United’s defensive display and super-sub Marcus Rashford’s impact in the stoppage-time win against West Ham.The top-four rivals looked set to play out a drab goalless draw on Saturday afternoon as former United boss David Moyes’ well-drilled side produced a solid performance at Old Trafford.West Ham had already won there this season in the Carabao Cup but this time United emerged victorious as Rangnick threw caution to the wind, bringing on Anthony Martial Edinson Cavani and Rashford.All three were involved in the third and final minute of stoppage time, with the latter...
PREMIER LEAGUE・2 DAYS AGO
San Diego Union-Tribune

Virgil van Dijk insists Liverpool are paying no attention to Manchester City despite closing the gap on their Premier League title rivals.A hard-fought 3-1 win at Crystal Palace on Sunday lifted the Reds to within nine points of Pep Guardiola’s side, who were held to a 1-1 draw away to Southampton on Saturday.City have played a game more than Liverpool and the Merseyside outfit are set to visit the Etihad Stadium in April, leaving plenty to play for.“You can’t deny it’s in your mind, but as we have said many times we take it game by game,” Van Dijk said...
PREMIER LEAGUE・1 DAY AGO