Many believe that the metaverse presents a huge opportunity. But just how huge? There are varying opinions.

ARK Invest founder Cathie Wood told CNBC last week she thinks the metaverse will be a multitrillion-dollar market. Investment firm Morgan Stanley has a more specific estimate of $8 trillion. But venture capitalist Matthew Ball, CEO of Epyllion, believes the metaverse market could be worth up to $30 trillion over the next 15 years.

Could Ball's bullish outlook be right? Maybe so. If he is, here are three stocks to buy with a potential $30 trillion metaverse market on the way. 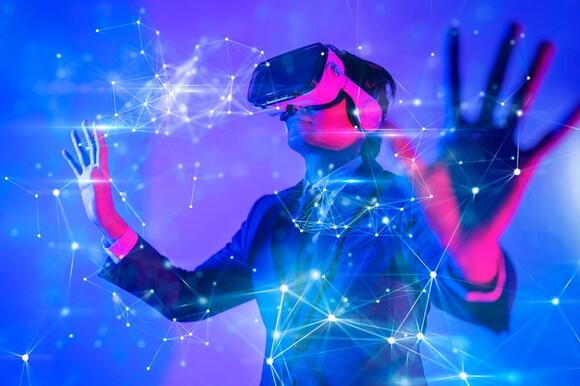 There's at least one person who thinks the metaverse market could be bigger than $30 trillion. Nvidia (NASDAQ: NVDA) CEO Jensen Huang said in his company's second-quarter conference call in August that he's "fairly sure" that the metaverse "is going to be a new economy that is larger than our current economy." The global economy last year topped $80 trillion.

Nvidia should be among the biggest winners in the metaverse, even if Huang's view is overly optimistic. The company's Omniverse platform is a piece of the metaverse that's already available. Omniverse supports 3D simulation and design collaboration.

Just one part of this virtual platform -- Omniverse Avatars -- has a potential market of $40 billion per year . Although I don't think that Nvidia will capture all of this market, my view is that Omniverse will be a massive commercial success for the company over the next decade and beyond.

But I also anticipate that Nvidia could have an even greater opportunity with its graphics chips. The demand for these chips will likely explode if the metaverse lives up to the hype. Nvidia is the leading provider of graphics chips for gaming today. I fully expect that it will remain at the top in the metaverse.

Sure, Meta Platforms (NASDAQ: FB) really messed up the FAANG stocks with its name change from Facebook. However, count me among those who agree with the company's decision to underscore that its future is tied to the metaverse. I think that future is a bright one.

No company has painted a better picture of what the metaverse could become than Meta. Arguably no other company will invest as heavily in building the metaverse as Meta, either.

Meta is developing virtual reality and augmented reality devices. It's building a new operating system for the metaverse. It's creating a digital commerce platform. The company is working on content studios and, unsurprisingly, a social platform for the metaverse.

CEO Mark Zuckerberg said in the company's Q3 conference call that Mega's goal is to "help a billion people use the metaverse and support hundreds of billions of dollars of digital commerce" by the end of this decade. My prediction is that Meta will achieve that goal -- and make investors much wealthier in the process.

For the metaverse to truly achieve its potential, Nvidia's Omniverse and Meta's development efforts won't be enough. Millions of content creators will be required to build out the metaverse. Unity Software (NYSE: U) aims to be the company that provides those creators the tools they need to make it happen.

As of the end of 2020, 71% of the top 1,000 mobile games were developed with Unity's platform. The company intends to make sure that a similar percentage of content for the metaverse is built with its products.

Unity's recent acquisition of Weta Digital looks like a great step toward that goal. The company already had the tools that programmers needed for building 3D games. Weta's visual effects tools enable Unity to meet artists' needs as well.

The stock might seem to be overpriced with shares trading at nearly 43 times sales. However, Unity should have a massive opportunity with the metaverse -- whether the market ends up being closer to $8 trillion or $30 trillion.

If the market crashes, get defensive.
STOCKS・20 HOURS AGO
The Motley Fool

An analyst slashed his price target for the video streaming stock.
STOCKS・16 HOURS AGO
Markets Insider

Stock markets tumbled last week on fears about rising interest rates and inflation. The tech-heavy Nasdaq index fell 8% last week and is down 13% this year. The world's five richest tech tycoons have collectively lost about $85 billion in 2022.
STOCKS・1 DAY AGO

Value should be the name of the game in 2022.
STOCKS・21 HOURS AGO
The Motley Fool

Spoiler: It's not about the new Bronco Raptor.
STOCKS・19 HOURS AGO
The Motley Fool

The tech giant faces a litmus test going into the release of its quarterly report on Thursday.
STOCKS・18 HOURS AGO
The Motley Fool

These companies are reliable, provide vital services to their customers, and trade at a reasonable valuation.
STOCKS・23 HOURS AGO

Tech stocks are tumbling, but investors should keep a long-term perspective.
STOCKS・18 HOURS AGO
The Motley Fool

The stock seems to be moving down with broader market sentiment.
STOCKS・18 HOURS AGO
The Motley Fool

Can business keep growing at the record-setting pace it has been on?
STOCKS・22 HOURS AGO

High growth is out of favor right now, and stocks in the EV sector are getting hit hard.
STOCKS・18 HOURS AGO
The Motley Fool

The iBuyer has fallen out of favor with investors, but could it be a long-term opportunity?
STOCKS・19 HOURS AGO
The Motley Fool

Gravity is a law, not a suggestion, for unprofitable space stocks.
AEROSPACE & DEFENSE・16 HOURS AGO
The Motley Fool

With time as an investors' ally, these game-changing stocks can make people rich.
STOCKS・2 DAYS AGO
The Motley Fool

These two companies could be top performers in 2022.
STOCKS・23 HOURS AGO
The Motley Fool

These high-growth companies are leading players in their respective industries.
STOCKS・22 HOURS AGO
The Motley Fool

Tech and fintech stocks have been getting hammered amid the Federal Reserve's changing policy outlook.
STOCKS・16 HOURS AGO
The Motley Fool

When Bitcoin falls so do Bitcoin miners.
MARKETS・15 HOURS AGO