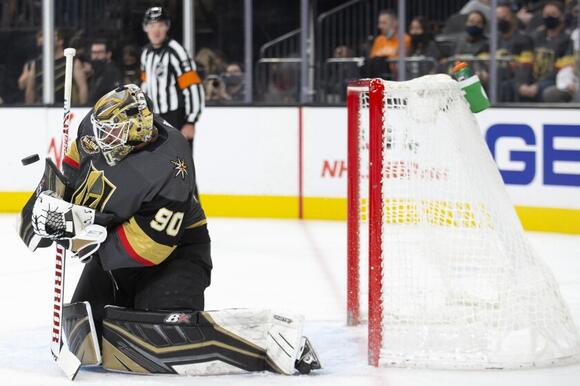 Vegas Golden Knights goaltender Robin Lehner said Sunday he is skipping the 2022 Winter Olympics, where he had been expected to play for Sweden.

The 30-year-old Lehner, from Gothenburg, Sweden, cited health reasons for skipping the Winter Games in Beijing. He is a longtime mental health advocate who has been open about his bipolar disorder and his own struggles off the ice.

“For health reasons, me and my psychiatrist decided with agents that I’m not gonna go and I wish them all the best,” Lehner said after a 23-save performance in the Golden Knights' 3-2 win over the Calgary Flames on Sunday night.

Lehner, who has played with the Ottawa Senators, Buffalo Sabres, New York Islanders, Chicago Blackhawks and Vegas, has a career record of 138-133 with a goals-against average of 2.71 and a save percentage of .917 with 16 shutouts.

The NHL season officially started back on October 12. In this article, we track all the NHL games today as
NFL・6 HOURS AGO
Sportsnaut

Now that the 2021-22 season is about half of the way through, and Covid is ravaging many clubs, it’s time
HOCKEY・22 HOURS AGO
Sportsnaut

If you’re looking for fantasy hockey tips for the games ahead, you have come to the right place. As the
NHL・1 DAY AGO

Joonas Donskoi, who has yet to score a goal this season, netted the clincher in a shootout as the Seattle
NHL・1 DAY AGO
WEEI Sports Radio

Carolina Hurricanes forward was asked on Tuesday if he sees similarities between himself and Boston Bruins star Brad Marchand. Marchand responded by saying that’s like “comparing a Lambo to a Prius.”
NHL・22 HOURS AGO
Sportsnaut

After the first 20 minutes, it seemed as if the Vegas Golden Knights were going to coast to victory in
NHL・1 DAY AGO

When Boston hosts the Carolina Hurricanes on Tuesday night, the Bruins will retire the No. 22 of Hall of Fame
NHL・1 DAY AGO
KMOX News Radio

With every league roughly midway through the 2021-22 season, we take a look at how some of the Boston Bruins’ top prospects are doing, including Fabian Lysell, Jack Studnicka and Mason Lohrei.
NHL・1 DAY AGO
San Diego Union-Tribune

In their first matchup since Feb. 18, 2020, the Buffalo Sabres upended the Ottawa Senators at the Canadian Tire Centre by a final score of 3-1. Kyle Powell has a complete game recap:
NHL・16 HOURS AGO
KOAA News 5 Southern Colorado

Avs forward Nazem Kadri is headed to the NHL All-Star Game after all after getting voted in by fans through the “Last Men In” vote.
NHL・19 HOURS AGO

Centers Steven Stamkos of the Tampa Bay Lightning, Nazem Kadri of the Colorado Avalanche and Mika Zibanejad of the New York Rangers, and Anaheim winger Troy Terry have won the final roster spots for the NHL's All-Star Weekend as a result of fan voting
NHL・19 HOURS AGO