Moderna or Pfizer? Study finds one is slightly more effective 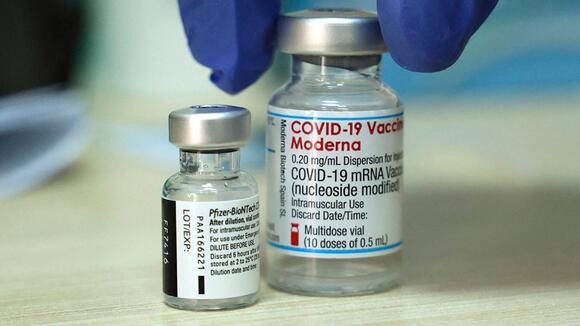 (NEXSTAR) – A head-to-head study of the Moderna and Pfizer vaccines has determined the former to be slightly more effective against COVID-19 , at least as far as the alpha and delta variants are concerned.

The results of the study , conducted by researchers with Harvard Medical School, the Harvard T.H. Chan School of Public Health, Brigham and Women’s Hospital and the Veterans Administration, were published in the New England Journal of Medicine this week.

Moderna was also found to be slightly more effective against every category of COVID-19 outcome, including infection, symptomatic infection, hospitalization, ICU treatment or death.

Both of the vaccines, however, are highly effective against COVID-19 outcomes, the study’s authors said.

“Given the high effectiveness of both vaccines, either one is strongly recommended to any individual offered the choice between the two,” said lead author Barbra Dickerman, an instructor of epidemiology and investigator at the Harvard T.H. Chan School’s CAUSALab.

Dickerman acknowledged that while the differences in effectiveness were slight, “they may be meaningful for larger decision-making bodies, such as health care systems and higher-level organizations, when considering the large population scale at which these vaccines are deployed.”

The study, meanwhile, was conducted prior to the outbreak of the omicron variant, meaning more research is needed to assess either vaccine’s effectiveness against the latest mutations.

Walking regularly and at greater intensity may help prevent Type 2 diabetes among 70- and 80-year-olds, according to a UC San Diego-led study released Thursday which measured steps and pace among these age groups.
SAN DIEGO, CA・3 DAYS AGO
FOX 5 San Diego

Officials in Poway have identified the man suspected in a bizarre burglary and vandalism spree that was partially caught on surveillance video this week.
POWAY, CA・15 HOURS AGO
NEWS10 ABC

Despite lack of evidence it treats COVID-19, health insurers are still paying for ivermectin prescriptions

There’s very little evidence that the drug actually fights the virus, yet a new study reveals health insurers are still paying for patients wanting the controversial drug.
NFL・1 HOUR AGO

A new Centers for Disease Control and Prevention study says booster shots of Pfizer's and Moderna's COVID-19 vaccines proved vital in keeping additional Americans out of the hospital as the omicron variant spread this month, The New York Times and Bloomberg reported Friday.
HEALTH・2 DAYS AGO
WRBL News 3

Could the majority of side-effects people feel after getting the COVID-19 vaccine all be in their heads?
PHARMACEUTICALS・2 DAYS AGO
News 5 Cleveland WEWS

The data showed that Moderna vaccine recipients had fewer breakthrough infections and hospitalizations than did Pfizer recipients. But there was no "statistically significant" difference in mortality rates.
PHARMACEUTICALS・3 DAYS AGO
Hammond Daily Star

Moderna, Pfizer vaccines best for those with clot risk

DEAR DR. ROACH: I was diagnosed with the factor V Leiden mutation a few years ago, after having a deep vein thrombosis. Then I got COVID-19 in October 2020, but recovered with only mild symptoms. Since I have the factor V mutation, I have chosen not to get a vaccine for COVID. Unfortunately, I was diagnosed with COVID again in December of last year. Now that I have completed quarantine once more, I am really not comfortable with getting the vaccine. Any suggestions? – C.D.
DRINKS・2 DAYS AGO

A new study by researchers at the Case Western Reserve University School of Medicine finds those who received the Moderna COVID-19 mRNA vaccine are less likely to experience “breakthrough” COVID-19 cases, compared to recipients of the Pfizer-BioNTech mRNA vaccine. A vaccine breakthrough infection occurs when a person becomes...
PHARMACEUTICALS・3 DAYS AGO
fox7austin.com

Pfizer Inc. said laboratory testing showed its COVID-19 pill Paxlovid appears to be effective against the omicron variant of the coronavirus. The company said three separate studies demonstrated that the in vitro efficacy of nirmatrelvir, the antiviral treatment's main component, was maintained against the variant of concern. In an initial...
MEDICAL & BIOTECH・3 DAYS AGO
WRAL News

Duke study: If you got J&J vaccine, switch to Moderna or Pfizer for booster

If you received the Johnson & Johnson vaccine, new research shows you are better off switching brands for your booster. The Duke study comes one month after the CDC flat out recommended the two mRNA vaccines over the J&J shot. Nearly a half million people in North Carolina have gotten...
PHARMACEUTICALS・4 DAYS AGO
Daily Mail

Up to 76% of reported COVID-19 vaccine side effects could be imagined as part of a phenomena called the 'nocebo effect', study finds

Up to three-quarters of reported symptoms of the COVID-19 vaccines may not be entirely real, a new study suggests. A research team from Harvard University performed a meta analysis on 12 previous studies that compared reported side effects to the Covid vaccines to those reported by people who instead received a placebo.
SCIENCE・5 DAYS AGO

Pfizer (PFE -2.3%) says that several lab studies it has conducted indicate that its COVID-19 antiviral pill Paxlovid (nirmatrelvir [PF-07321332] tablets and ritonavir) is effective against the Omicron variant. The results were from three in vitro -- outside of a living organism -- studies and have yet to be peer...
INDUSTRY・5 DAYS AGO
healio.com

A real-world study conducted at more than 30 U.S. hospitals demonstrated that the Pfizer-BioNTech vaccine was 94% effective at preventing hospitalization for COVID-19 among adolescents aged 12 to 18 years. The study, which was conducted while delta was the predominant SARS-CoV-2 variant, also showed that the vaccine was 98% effective...
INDUSTRY・12 DAYS AGO
ktbb.com

(NEW YORK) -- A peanut allergy treatment often used on children 4 years old and up in the U.S. appears to be safe for toddlers too, a new study has found. Around 2% of children in the country suffer from the allergy, some to a debilitating degree, which is why the discovery is "extremely exciting," said Dr. David Stukus, professor of clinical pediatrics and director of the Food Allergy Treatment Center at Nationwide Children's Hospital.
HEALTH・2 DAYS AGO
scitechdaily.com

A randomized trial to study caffeinated coffee consumption among 100 volunteers for two weeks found both potentially beneficial and harmful short-term health consequences of drinking coffee. When participants were randomly assigned to drink coffee, they were more physically active, yet they also had an increased number of abnormal heartbeats and...
FOOD & DRINKS・4 DAYS AGO
Winona Daily News

A new study has found e-cigarette users with COVID-19 are more likely to experience enhanced symptoms and seek ER care. Research from Mayo Clinic, published in the Journal of Primary Care and Community Health, showed those who vape have a higher occurrence of COVID symptoms including headache, muscle or chest pain, nausea, diarrhea or loss of taste and smell. Vapers and tobacco smokers are also more likely to experience labored breathing and visit the emergency room for their side effects.
PUBLIC HEALTH・5 DAYS AGO
CBS News

A new CDC study found children who had COVID-19 were more likely to get diagnosed with diabetes a month or more later. Dr. Mary Pat Gallagher, director of NYU Langone's Pediatric Diabetes Center, says infections may create a “perfect storm” for diabetes to develop quicker — and “COVID is one of the viruses that maybe can do that a little more.”
PUBLIC HEALTH・9 DAYS AGO
Shropshire Star

Climate hazards – including rising temperature, pollution and wildfires – are increasing the risk of pre-term birth. Rising temperatures around the world as a result of climate change are having a devastating effect on foetuses, babies and infants, studies have found. Scientists from six different studies determined that...
ENVIRONMENT・9 DAYS AGO
Knowridge Science Report

One autoimmune disease could lead to another, study finds

In a new study from the University of Colorado, researchers discovered that having one kind of autoimmune disease can lead to another. The scientists found that mice with rheumatoid arthritis in joints went on to develop spinal lesions similar to those in axial spondyloarthritis (AxSpA) which causes fusion of the vertebrate and curvature, or bending, of the backbone.
DISEASES & TREATMENTS・14 DAYS AGO