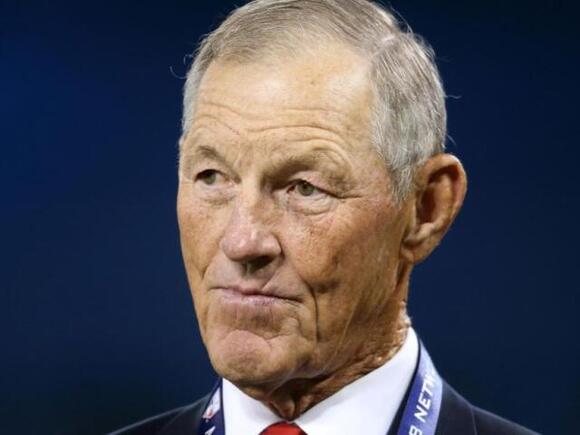 Kaat played Major League Baseball for 25 years, 15 of which were spent pitching for the Minnesota Twins. He won 283 games in his career and 16 Gold Glove awards as the top fielding pitcher in the league.

Kaat has been a longtime broadcaster since his playing career ended. He will enter the Hall of Fame with former Minnesota teammate Tony Olivia, Minnie Minosa and Gil Hodges.

The quartet will be inducted in 2022 in Cooperstown, N.Y., along with Early Baseball Era's Buck O'Neil and Bud Fowler.

Tyler White agreed to terms for a minor league contract with the Milwaukee Brewers.
MLB・2 DAYS AGO
WJHL

The 67-year-old Evert revealed the diagnosis in a story posted Friday on ESPN.com.
NFL・2 DAYS AGO

Jonathan Papelbon joined Rob Bradford on the Live BP podcast to make it clear he has no intention of following in the footsteps of his former teammate Jon Lester, saying he will never announce his retirement.
MLB・19 HOURS AGO
Audacy

Jonathan Papelbon joined WEEI’s Live BP Show and spoke about the backstory behind why he and Bryce Harper went at it in the Washington Nationals dugout in 2015.
MLB・15 HOURS AGO
USA TODAY

Despite 609 career home runs and seven All-Star appearances, the former Cubs slugger hasn't come close to being elected in his nine years.
MLB・18 HOURS AGO
Inside The Blue Jays

The one thing — the one thing — Yankees fans could reliably count on Gleyber Torres to provide, even during his darkest times in 2020 and 2021, might have just disappeared thanks to an architect’s whim. So, in case you’re counting, the Yankees signed Gerrit Cole, then...
MLB・8 HOURS AGO
Chicago Tribune

Outfielder Oscar Colás, the No. 5 international prospect according to MLB Pipeline, came to terms on a $2.7 million deal with the Chicago White Sox, MLB.com’s Jesse Sanchez reported Saturday. According to Sanchez, the Sox and outfielder Erick Hernandez agreed to terms on a $1 million deal. MLB Pipeline ranks Hernandez as the No. 28 international prospect. Colás, who was born in Santiago de ...
MLB・2 DAYS AGO
97.3 The Fan

The 2021 Phillies were a top heavy team, both in terms of production and salary. Given that level of top talent, which players from last year's team have a shot at reaching Cooperstown?
MLB・8 HOURS AGO
Chicago Tribune

The middle of January traditionally signals the changing of the seasons in Chicago, a time to wash away the gloom of another Bears disaster and start thinking warm thoughts. In most years, the sidewalks are caked in ice, another polar vortex is plunging down from the Arctic and the Cubs and White Sox are holding their annual fan fests at a downtown hotel, celebrating the past while hyping the ...
NFL・19 HOURS AGO
MassLive.com

The National Baseball Hall of Fame and Museum will announce its Class of 2022 on Jan. 25, and rest assured that if there is joy in Cooperstown, it will be muted. Once the highlight of the offseason, the baseball selections lost their appeal as a celebration of the sport years ago. Today, they serve as a referendum on the morals and values of American society — what types of behavior we will tolerate or even exalt, and which cannot be forgiven as stains on what we once called the “National Pastime.”
COOPERSTOWN, NY・1 DAY AGO
Watertown Public Opinion

MADISON — Watertown native Aaron Kranz and De Smet native Josh McNames are two of the 14 members of the 2022 induction class into the South Dakota Intercollegiate Conference Basketball Hall of Fame. The 2022 SDIC Basketball Hall of Fame class will be honored on April 2 in Madison,...
WATERTOWN, SD・7 HOURS AGO
Inside The Phillies

The Philadelphia Phillies have made their move on Venezuelan prospect William Bergolla Jr.
MLB・2 DAYS AGO