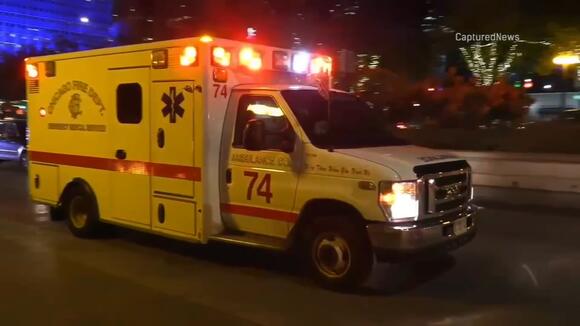 A rash of violence in downtown Chicago over the weekend has city officials on alert. Chicago police said they arrested 21 young people Saturday night when large crowds of teens filled the Loop. Four people, including two police officers, were injured during a fight near Millennium Park. One officer was left with a broken arm. Crowds turned rowdy and spilled into other parts of the downtown area. A 15-year-old shot was also shot after he bumped into someone on Wabash Avenue, according to police. About 11:20 p.m., the teen was walking in the 200-block of North Wabash Avenue when he bumped into a male walking in the opposite direction, Chicago police said. Following an argument, the male shot the 15-year-old in the arm, police said. He was taken to Lurie Children's Hospital, where he was in good condition, police said. A CTA bus driver is also recovering after being beat up Saturday night near Michigan Avenue and Washington Street. About 9 p.m., the driver, a 49-year-old man, was inspecting the bus after hearing a loud noise in the 100-block of North Michigan Avenue when he was pushed and repeatedly punched by an unknown male and female, Chicago police said. He was taken to Northwestern Memorial Hospital with bruises to his face and body, police said. He was listed in fair condition, police said. A 15-year-old boy has been charged with a felony count of aggravated battery of a transit employee and disorderly conduct in connection with the incident. He was arrested soon after the reported attack, police said. Mayor Lori Lightfoot said Sunday that parents need to take responsibility for their kids. Concern has loomed Sunday night over the many who visit the Magnificent Mile. "Being from Chicago, you always thought this was the safest place in the city to be, but these last few years have been really, really rough," said Millennium Park visitor Tracy Baldwin. "Always ceases to be amazed by some of the crime activity that's still happening down here." Police said of the young people arrested, nine of them were given curfew violations. Two replica guns were recovered by police At least 25 people have been shot, six fatally, in Chicago weekend violence. The Sun-Times Media report contributed to this post.

The Mayor needs to take a Very strong stance against the crime in the downtown area and across the the city and not worry about hurting feelings.

All retailers and restaurants need to hold Chicago/Cook county politicians, attorneys and judges responsible along with the parents for lost business. Parents equally need to be held responsible. People don’t want to go anywhere close to Chicago.

Hold your hands Up 🙌 🙏 No One in Chicago Cares! Period! Noo One that can Seriously, Hold the Adults of these Sooo called children accountable? Sad 😔 I'm Sure, that maybe Fox, could take them home and rehab these neglected children. 🤔

At least one other suspect drove away in the wanted vehicle, which was later found empty in East Garfield Park, CPD said.
CHICAGO, IL・43 MINUTES AGO
ABC 7 Chicago

The carjacking suspect was arrested in the basement of a Northwestern University medical school building.
22 HOURS AGO
ABC 7 Chicago

A new data investigation into the startling number of expressway shootings in the Chicago area reveals a rapid climb in shootings here in the past three years.
CHICAGO, IL・17 HOURS AGO

Two people who were shot to death inside a hotel on Chicago's Magnificent Mile Monday afternoon have been identified.
CHICAGO, IL・1 DAY AGO
ABC 7 Chicago

There is a new curfew in Chicago after a 16-year-old boy was gunned down near a popular tourist attraction this weekend.
CHICAGO, IL・1 DAY AGO
ABC 7 Chicago

Detectives said this person approached a woman at the Clark and Lake platform in the Loop and ripped her purse off her shoulder.
CHICAGO, IL・9 HOURS AGO

A CTA bus was involved in a crash early Wednesday morning on the North Side that caused some delays and reroutes.
CHICAGO, IL・1 DAY AGO
ABC 7 Chicago

A 7-year-old student suffered a graze wound after a gun went off at Disney Magnet School on Chicago's North Side Tuesday morning, officials said.
CHICAGO, IL・1 DAY AGO
ABC 7 Chicago

16-year-old shot and killed at 'Bean' worried about Chicago crime, living past 21

"I told him not to go," his mother said. "I said, 'You're not going downtown.' And I got a call, Seandell was shot downtown."
CHICAGO, IL・2 DAYS AGO

Chicago police are questioning a person of interest in the vicious shooting.
CHICAGO, IL・2 DAYS AGO
ABC 7 Chicago

Carjacking suspects were arrested after a CPD officer was hit by a vehicle following a shooting, an alderman said.
CHICAGO, IL・2 DAYS AGO
ABC 7 Chicago

There has been an uptick in crime on the CTA so far this year.
CHICAGO, IL・2 DAYS AGO
ABC 7 Chicago

Police said the incident appeared to be gang-related.
2 DAYS AGO
ABC 7 Chicago

Mom scolded by judge after gun goes off in son's backpack at school: 'supremely negligent'

The 8-year-old brought the loaded gun to school after prosecutors say he found it under his mother's bed.
CHICAGO, IL・23 HOURS AGO
ABC 7 Chicago

There are calls to demolish the buildings for security purposes because of their proximity to the Dirksen Federal Courthouse.
CHICAGO, IL・22 HOURS AGO