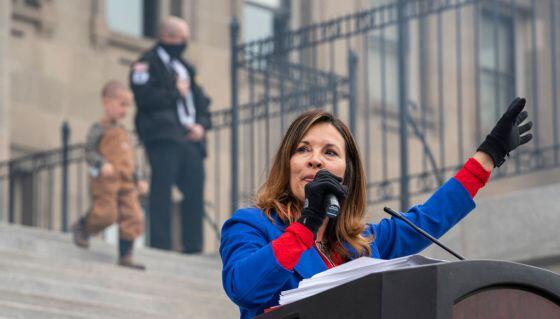 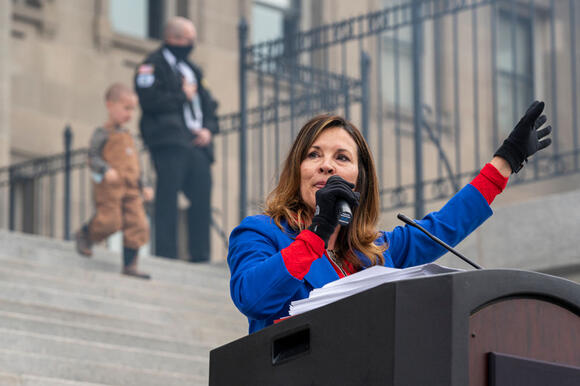 A local Republican “community leader” based in Idaho was blasted recently for a racist since-deleted Tweet complaining about a commercial showing a Black family enjoying the holidays. The Daily Beast reported Lisa Leisy lost it on social media after seeing an old Hershey commercial depicting a Black family reveling in the holiday spirit.

Writer Tim Peacock said the incident was basically “the 2021 GOP in a nutshell.”

As of Sunday, Leisy no longer had her affiliation with Idaho Lt. Gov Janice McGeachin’s gubernatorial campaign listed in her Twitter bio. Her tweets were also protected. She lists herself as anti-vaxx local leader. It is unclear if she is still affiliated with McGeachin’s campaign.

But given the stunts McGeachin has pulled this year alone, it’s unclear if Leisy went too far for the gubernatorial candidate. Back in May, McGeachin used a short stint as acting governor to issue an executive order banning mask mandates.

Leisy’s Instagram account god.and.patriotism was still public with a recent post sharing a statement from Donald Trump continuing the false narrative of “election fraud” during the 2020 election. Leisy seems to support extremist Republican candidates and party figures from her social media.

Another Twitter user posted what appeared to be screenshots of deleted Instagram posts complaining about the Hershey’s commercial and the new Annie in the NBC production of Annie Live! Wait until she finds out the talented Celina Smith isn’t the first Black Annie either! That honor belongs to the equally gifted Quvenzhané Wallis, who starred in an Annie remake along with Jamie Foxx as Daddy Warbucks in 2014.

First reported by Boise State Public Radio , the outlet noted that Leisy had a similar meltdown on her Instagram account over Apple “promoting” Juneteenth.

“Guess we’re on our way to be a black nation ahead,” she wrote. “Welcome to the ‘new’ America.”

Pretty sure Leisy hasn’t had issues with commercials showing all white families enjoying the holidays or spending quality time together.

Disparities in representation in advertising isn’t a new issue. And as the U.S. population continues to diversify, so should representation in media and advertising. A November blog post from Procter & Gamble’s Chief Brand Officer Marc Pritchard pointed to “new habits for multicultural growth.”

“According to the 2020 United States Census, 100% of the population growth in the past decade came from increases in the Black, Hispanic, Asian, Pacific Islander, Native, Indigenous, multi-racial and multi-ethnic segments of the population,” wrote Pritchard. “Multicultural buying power is now worth more than $5 trillion and has been THE driver of market growth for a decade.”

I have noticed more multiracial and minority based commercials. It should be mixed as the population. It is strategic as consumer consumption has no race or color. All the privileged are enraged as their entitlement is in decline. People are created equal, nobody is beneath you…

I don’t understand any of this! Blacks like Hershey’s chocolate, too and it’s a cute commercial. Something is off here.

I betcha, that if the commercial showed them eating "White Chocolate ", she probably would have committed suicide. This is so childish. Grow up people. Damn, this Black racist vs White racist crap is getting out of hand. Only those who have mental handicaps dwell on such insignificant things like this. Just remember IT'S JUST A COMMERCIAL!

Find Out What Idaho’s Gov. Little is Dumping $50 Million Into

Earlier this week, Governor Little took a moment to recognize Krista Gneiting (a teacher at Rigby Middle School), who talked an active school shooter out of continuing their fire. She held the shooter in her arms until officials arrived. Like many mass shootings, a lot of it can be attributed...
IDAHO STATE・3 DAYS AGO
107.9 LITE FM

Happy New Year, everyone, and welcome to 2022. We have finally reached the point where the legislature will be back in session and the much anticipated Idaho Republican Party Primary. The most talked-about contest is the race for the Republican nomination for governor. Four years ago, there was an open seat and three high-profile candidates.
IDAHO STATE・13 DAYS AGO
MarketWatch

PIERRE, S.D. (AP) — A South Dakota legislative committee on Friday approved a bill championed by Gov. Kristi Noem to ban transgender women and girls from participating in school sports leagues that match their gender identity. With the Republican governor’s full-fledged lobbying, the bill received enthusiastic approval in the...
POLITICS・2 DAYS AGO
US News and World Report

Idaho Republicans Seek to up Deadline for Affiliation Change

BOISE, Idaho (AP) — Idaho’s 300,000 unaffiliated voters might have to act fast if they want to participate in the closed Republican primary on May 17. A Republican-backed bill introduced Thursday would eliminate the current practice allowing unaffiliated voters to change their party affiliation up to election day.
IDAHO STATE・3 DAYS AGO

With about 79% of the vote, Sheila Cherfilus-McCormick has been named as the winner of Florida's special election to replace the late U.S. Rep. Alcee Hastings in Congress. But Republican Jason Mariner, who was trounced, refuses to concede and said he plans to sue.
FLORIDA STATE・3 DAYS AGO
Post Register

CALDWELL, Idaho (CBS2) — Human trafficking is a nationwide problem -- including here in Idaho. Tonight (Wednesday), a community discussion on human trafficking was held at the Flying "M" Coffee shop in Caldwell. During the forum, folks learned the warning signs of human trafficking and what you can do if you encounter someone in trouble.
CALDWELL, ID・4 DAYS AGO
Idaho Statesman

Want to vote as Republican in Idaho’s primary? Bill would move up deadline to register

A GOP-backed bill, introduced Thursday, would create a new deadline for the state’s more than 300,000 unaffiliated voters to participate in closed Republican primary elections. The proposal comes as political pundits have recently called for independents and Democrats to register as Republicans so they can vote in the 2022...
IDAHO STATE・3 DAYS AGO
Idaho's Newschannel 7

BOISE, Idaho — The 2022 Idaho legislative session starts on Monday with Governor Brad Little's fourth State of the State Address. It's his opportunity to lay out his legislative and budget priorities, including education and tax relief for Idahoans. However, he's not the only one with a priority list. Democrats and Republicans in the legislature have their top issues to tackle as well.
BOISE, ID・7 DAYS AGO

Charles Kellar became the first Black person to pass the Nevada Bar exam in 1960, paving the way for transformative progress in the state’s legal field. In recognition of Black History Month, The Mob Museum will host a panel discussion featuring individuals who have held historic positions of power in Nevada’s legal arena. The panelists will discuss diversity, equity and inclusion in the law and the current state of the criminal justice system.
NEVADA STATE・12 DAYS AGO
KTVB

If armed violence erupts in 2024, the fate of the nation might well be decided by a simple fact: a big subset of the Republican Party has been systemically arming itself for this very reason.
PRESIDENTIAL ELECTION・28 DAYS AGO
The US Sun

Five rare and valuable coins to collect worth up to $1.5million, from the Lincoln penny to Washington quarter

THERE are quite a few rare coins out there that might be worth some serious mint. Some might happen possess these and are wondering if they should cash in now or continue to hold on to them. Reasons why you might want to sell one of your rare coins is...
WASHINGTON STATE・21 DAYS AGO

AMERICANS should take rapid coronavirus tests before visiting their family and consider canceling their Christmas plans, an expert says. The Omicron coronavirus variant is spreading around the world, sparking fears among top US scientists that the strain could have a serious impact on health systems. Professor David Celentano, an epidemiologist...
PUBLIC HEALTH・27 DAYS AGO
insideedition.com

Ex-Wife of Oath Keepers Founder Charged With Sedition Speaks Out: 'He Is a Dangerous Man'

It’s being called a major step forward in the investigation into the Jan. 6 attack on the U.S. Capitol — the arrest of the founder of the far right militia group, the Oath Keepers. Now Stewart Rhodes’ ex-wife is speaking out, saying he’s a dangerous man.
PUBLIC SAFETY・2 DAYS AGO
MarketWatch

Despite early challenges to COVID-19 vaccine access and uptake, some things have gradually changed for the better. “Black and Hispanic people have been less likely than their white counterparts to receive a vaccine, but these disparities have narrowed over time, particularly for Hispanic people,” according to the Kaiser Family Foundation, a healthcare think tank. “White people account for the largest share of people who remain unvaccinated.”
PUBLIC HEALTH・3 DAYS AGO
Business Insider

The raid mainly took place at a warehouse located north of Mexico City. The country is clamping down on food companies that market to children.
ECONOMY・2 DAYS AGO

Dollar Tree customers say the decision to raise most prices to $1.25 left them feeling 'sick to their stomachs'

Dollar Tree is attracting criticism from many loyal customers over its price hike. Some shoppers described it as a "calamity" to CNN.
BUSINESS・1 DAY AGO
USA TODAY

A fake, pro-Trump slate of 2020 electors sent their votes to Congress. Who was behind it?

Sen. Kyrsten Sinema's filibuster speech has reenergized progressive efforts to find someone to primary and oust the Arizona Democrat

Grassroots groups in Arizona are working feverishly to find someone to challenge and unseat Democrat Kyrsten Sinema over her blockage of Biden's agenda and objection to nixing the filibuster. They saw a fundraising boost after her floor speech.
ARIZONA STATE・3 DAYS AGO
buzzfeednews.com

As millions of COVID cases spread across the US, teachers and parents have been thrown into chaos as some school districts revert to remote learning, leading to rising tensions as families try to limit exposing loved ones to the virus. Without universal childcare in the US, many parents rely on...
CHICAGO, IL・10 DAYS AGO