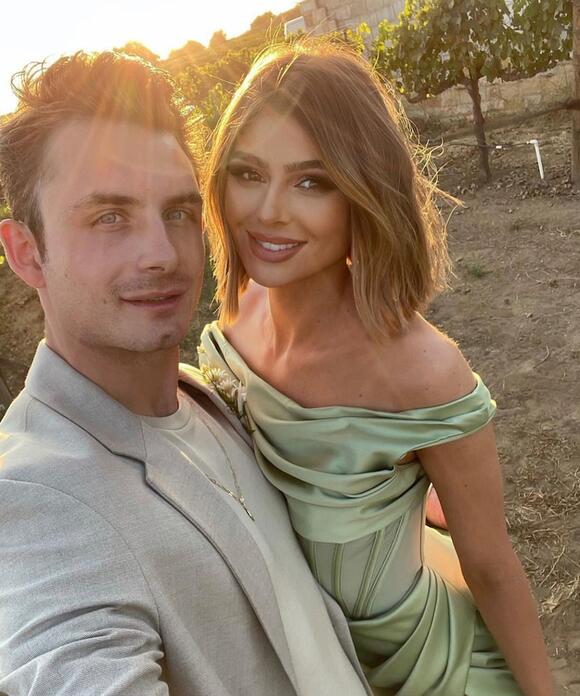 It's over between "Vanderpump Rules" sweethearts James Kennedy and Raquel Leviss — and their sense of timing is everything!

People magazine reports the couple ended their engagement during the filming of the Bravo show's Season 9 reunion in L.A. on Friday.

According to the outlet, Leviss handed her engagement ring back to Kennedy on camera. Each individually confirmed the split on IG Sunday.

Their statement read, "After these 5 wonderful years we had together, we decided we have two different goals and made the decision to call off the engagement. We love each other very much, but we aren’t in love anymore. We want nothing but the best for each other so please keep any thoughts positive. Sending Love."

The two became engaged in May. Kennedy popped the question elaborately, with a Coachella-themed proposal.

It would have been the first marriage for Kennedy, 29, and Leviss, 27.

Scammers, lowlifes, wannabes, your no one, with one click of the mouse and your history a very short history and thank god for that.

LOS ANGELES (CNS) — Actress Kathryn Kates, who appeared in episodes of “Seinfeld” and “The Many Saints of Newark,” has died. She was 73. Kates died of cancer on Saturday, her agent, Ben Jordan, told USA Today on Tuesday night, adding a memorial service is being prepared for her in the spring.
LOS ANGELES, CA・2 DAYS AGO
Complex

Chlöe Says She Hates When People Compare Her With Sister Halle Bailey, Calls It ‘Shallow’ and ‘Disturbing’

Chlöe and Halle Bailey both climbed the ranks of music together under their group Chloe x Halle, but the two sisters have since developed their solo careers. Because of how closely linked they were early on, Chlöe and Halle have been compared often and in a new interview for In The Know’s digital cover, Chlöe expressed how she feels about it.
MUSIC・9 DAYS AGO
The US Sun

KELLY Clarkson's ex-husband Brandon Blackstock is now a grandfather as his daughter Savannah has welcomed a child. The American Idol alum filed for divorce from Brandon back in June 2020. Savannah took to Instagram to share a snap of newborn footprints as she captioned the sweet photo: "January 17, 2022."
RELATIONSHIPS・7 DAYS AGO
bravotv.com

The Season 9 reunion for Vanderpump Rules is almost here and it's safe to say that it might be the most dramatic yet. (Need proof? Press play on the video above.) As Ariana Madix told Charli Burnett backstage during the taping, "This is definitely going to be unlike any reunion we've ever had before."
RELATIONSHIPS・9 DAYS AGO

It’s hard to keep track of everything going on in the universe of Real Housewives of Salt Lake City these days. Dare I say it, but the Jen Shah fraud allegations are almost in the background of it all. Mary Cosby didn’t show up to film the reunion after a season filled with allegations of […] The post Lisa Barlow Calls Meredith Marks A “Whore” Who “F–ked Half Of New York” In A Hot Mic Moment appeared first on Reality Tea.
4 DAYS AGO
Reality Tea

Real Housewives of Salt Lake City might be the best show on TV these days. This season has just been a knockout to watch, and I love each of the leading ladies differently. Lisa Barlow may set up storylines to cause drama, but she’s already an extremely quotable and relatable legend. Heather Gay’s evolution from a […] The post Andy Cohen Had “Long Talk” With Mary Cosby Before Filming RHOSLC Reunion; Andy Says It’s “Disappointing” Mary Skipped The Reunion appeared first on Reality Tea.
SALT LAKE CITY, UT・15 DAYS AGO
Reality Tea

The Real Housewives of Salt Lake City are always full of surprises, but this one is shocking for all the wrong reasons. The newest cast member, Jennie Nguyen, faces major backlash after a series of Facebook posts from 2020 resurfaced this week. As Page Six reported, Jennie shared a series of anti-Black memes with phrases […] The post Jennie Nguyen Responds To Backlash After Controversial Facebook Posts Resurface appeared first on Reality Tea.
SALT LAKE CITY, UT・8 DAYS AGO
Distractify

'RHOC's Jen Armstrong on Her Marriage: 'Ryne Packed His Bags and Left'

“Bringing Up Bates” stars Erin Bates and Chad Paine are parents again!. On Tuesday, the pair announced that they welcomed their fifth child. They wrote on Instagram, “Finley Marie Paine arrived this morning at 4:51am. Our little miracle baby is doing wonderful and we can’t wait to share more details soon! This mama and daddy are going to get a little rest now and as many snuggles as possible.”
FAMILY RELATIONSHIPS・9 DAYS AGO
ETOnline.com

There's still plenty of love between Syngin and Tania following their decision to divorce after two years of marriage. The two reunited on part one of the tell-all special for this season of 90 Day: The Single Life, and the emotional moment had both of them in tears. This season...
TV & VIDEOS・17 HOURS AGO
Reality Tea

Season 3 of Celebrity Big Brother is right around the corner, and the internet has been abuzz about which celebrities will be competing. Every day, a new list pops up from supposed “insiders” who claim to know all of the houseguests, typically consisting of a combination of reality stars, former athletes, and actors you may […] The post NeNe Leakes Dismisses Celebrity Big Brother Season 3 Casting Rumors appeared first on Reality Tea.
CELEBRITIES・2 DAYS AGO
StyleCaster

Not backing down. With Kelly Clarkson and Brandon Blackstock’s divorce trial on the horizon, the “Stronger” singer is prepared for things to get ugly—but she’s not letting it get in the way of settling her divorce on her own terms. Clarkson—who filed for divorce from Blackstock in June 2020—is reportedly focusing all of her efforts on hammering out the details of her split from the talent manager. “She is devoting 100 percent of any free time she has preparing for the trial,” a source told Us Weekly on January 26, 2022. “When not filming her talk show, she is hunkered down...
RELATIONSHIP ADVICE・2 DAYS AGO
People

90 Day Fiancé's Julia Trubkina and Brandon Gibbs are having some family time. Season 8 star Julia shared an Instagram Reel of herself dancing to the "Cha-Cha Slide" alongside her husband Brandon and his parents. In the video, uploaded on Thursday, the family looks to be in good spirits.
TV & VIDEOS・1 DAY AGO
Reality Tea

Lala Kent has been doing some serious reflecting on her life lately. And not just with her past relationship with ex-fiance, Randall Emmett. Which she seems to be reflecting on ad nauseam. This time, the Vanderpump Rules star is looking back with regret of a different kind. She’s walking back the comments she made about […] The post Lala Kent Admits She Was “Selfish” For Being Upset With Vanderpump Rules Cast After Only Raquel Leviss Reached Out After Reunion Taping appeared first on Reality Tea.
TV & VIDEOS・3 DAYS AGO
Us Weekly

Putting the past behind them. John Mulaney and Anna Marie Tendler are officially divorced five months after he initiated the process, Us Weekly confirms. The comedian, 39, and the makeup artist, 36, finalized their divorce in New York City on Thursday, January 6, according to court records. Mulaney and Tendler...
RELATIONSHIPS・22 DAYS AGO
Reality Tea

Is James Kennedy In A New Relationship Two Months After Split From Raquel Leviss?; He Was Spotted Holding Hands With A Mystery Woman

Prior to the current season of Vanderpump Rules, I was rooting for James Kennedy and Raquel Leviss. James has been on a sobriety journey and they seemed to be the most stable couple out of the group of (former) SURvers. However, how wrong I quickly was. But can you blame me? Bravo literally based the […] The post Is James Kennedy In A New Relationship Two Months After Split From Raquel Leviss?; He Was Spotted Holding Hands With A Mystery Woman appeared first on Reality Tea.
RELATIONSHIPS・2 DAYS AGO
extratv

“Clueless” star Alicia Silverstone, 45, stumbled upon a picture of herself in a navy blue dress with the caption, “Alicia Silverstone Candid Fat Photo.” As if!. She took to TikTok to respond to the body shamers, posting, “Damn, I think I look good!”. In the video,...
CELEBRITIES・1 DAY AGO
People

Mary Cosby is setting the record straight. During a conversation on Twitter Spaces on Tuesday, Cosby opened up about her decision to skip The Real Housewives of Salt Lake City season 2 reunion special, which was filmed earlier this month. "The only thing I have to say about the reunion...
TV & VIDEOS・9 DAYS AGO
Reality Tea

Season 9 of Vanderpump Rules has come to a close. It was a bit of a dull season, but the finale episode and reunion really delivered, so I’m hoping they just needed a season to re-adjust after all the shake-ups that happened the last two years. There was, however, one new edition who, depending on how you […] The post Scheana Shay Claims Brock Davies Paid For Her Engagement Ring With Multiple Credits Cards “To Be Funny” appeared first on Reality Tea.
CELEBRITIES・2 DAYS AGO
heraldsun.com

NC couple to star in A&E real estate reality series, showing how they made millions

Krystal and Dedric Polite had $90,000 in loose capital when they founded a property management company in 2017. In four years, their business expanded to include more than 60 rental properties earning millions in passive income. How they achieved that vertiginous growth is the subject of TV’s newest reality real...
BURLINGTON, NC・8 HOURS AGO