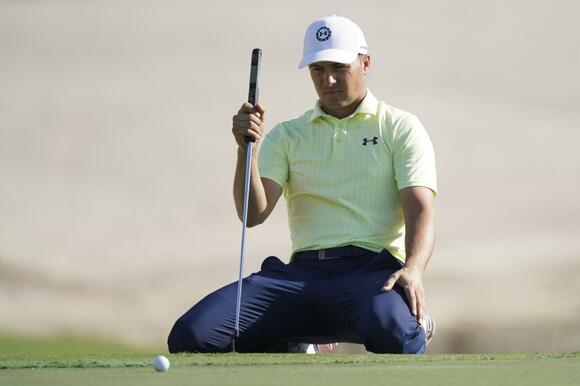 Jordan Spieth first almost went out of turn. Then he had his ball teed up a fraction ahead of the marker before Henrik Stenson pointed it out. Turns out that was the least of their problems on the ninth hole Sunday at the Hero World Challenge.

They were playing from the 17th tee.

To spice up the final round at Albany, the PGA Tour moved the tee box forward on the par-5 ninth hole to allow more players a chance to reach the green in two. They used the original ninth tee for the par-3 17th so the hole would play a little shorter and over the water.

Both tee boxes had a large white sign indicating the hole. Spieth and Stenson didn't notice.

“We kept our heads down off the finishing out on hole No. 8 and walked to the 9 tee box that we did on Wednesday, Thursday, Friday, Saturday and put the ball down and hit some beautiful tee shots,” Stenson said. “Then when we went down to the balls, the rules official said, ‘Did you hit off the right tee box?’”

In one respect, they were lucky. Had they finished out the hole without having a chance to correct the error, they would have been disqualified. They returned to the right tee, played the hole and added a two-shot penalty. Stenson made a 7, Spieth an 8.

In another respect, they were unlucky.

“My question was if we could just finish 19th and 20th (place) and leave after nine,” Stenson said. “But that wasn’t an option, either.”

They finished out the round: Spieth had a double bogey and a triple bogey on the back nine, along with four birdies for a 76 to finish last place. Stenson shot 72 and was second to last.

Spieth said there was a notice when they checked in to start the round about new yardages for the two holes. He wishes there had been a little bit more clarity that tee boxes were changing.

“I actually didn’t think we were going to get penalized because it’s a charity event, but then I realized there’s world ranking involved and all that,” Spieth said. “I think the frustrating part for us now is that every other group ... they're making sure to tell them, but for us they didn’t. It obviously didn’t matter for us, which is fortunate I think for those guys.”

Why playing Jordan Spieth for money is ‘sketchy,’ according to Kevin Kisner

They play only on special occasions now. Even Tuesday cash games on the PGA Tour can’t win a second or two from the pocket of Father Time. “I don’t really play on Tuesdays anymore, to be honest with you,” Kevin Kisner said. “I play the pro-am, and that’s about it. I always like to play with the young guys — they’re not young anymore. Jordan [Spieth], JT [Justin Thomas] and Rickie [Fowler], I love playing with them. I love playing with GW [Gary Woodland].
GOLF・1 DAY AGO
San Diego Union-Tribune

After losing both parents, Snedeker trying to get on track

Fore!: Talor Gooch inches away from being stuck by streaking ball before first tee shot

Right before Talor Gooch took his first tee shot of 2022 – and first since notching his maiden PGA Tour at the RSM Classic – he dodged a bullet (well, a traveling golf ball, but close enough) by inches. A wayward shot from someone else in Round 1...
GOLF・2 DAYS AGO
The Independent

Bryson DeChambeau: I don’t want to be a super-controversial figure

Bryson DeChambeau insists he does not want to be a “super-controversial” figure after a difficult season which made him feel like walking away from the game.DeChambeau was never far from the headlines in 2021 due to his ongoing feud with Brooks Koepka, missing the Olympics after testing positive for Covid-19 and a public spat with equipment sponsors Cobra during the Open Championship which saw him accused of acting “like an eight-year-old”.The 2020 US Open champion told the New York Post in December that there was a point last year when he “felt like I wanted to leave the game”, but...
GOLF・2 DAYS AGO

Russell Henley fired two eagles in a seven-under-par 63 on Friday to take a three-shot clubhouse lead midway through the second round of the US PGA Tour Sony Open in Hawaii. Henley, who started the day tied for second behind defending champion Kevin Na, opened with a birdie on the 10th hole at Waialae Country Club in Honolulu, and after a bogey at the 16th he kickstarted his round at the 18th, where he holed out from a greenside bunker for eagle. He gave back a stroke with a bogey at the first, then picked up six strokes in his last six holes -- a storming finish capped by a 29-foot eagle at the par-five ninth. "Nice to finish like that," Henley said. "I don't remember the last time I had two eagles in the same round, but it's definitely exciting."
HONOLULU, HI・1 DAY AGO
golfmagic.com

PGA Tour star Talor Gooch was nearly struck on the head by a golf ball as he lined up to strike his opening tee shot down the par-4 1st on day one at the Sony Open. Commentators had no idea where the golf ball even came from as it whistled past Gooch's head as he stepped up to play his first shot of the round.
GOLF・1 DAY AGO
San Diego Union-Tribune

Russell Henley takes 2-stroke lead into final round at Hawaii

Russell Henley shot a 3-under 67 Saturday to take a two-stroke lead into the final round of the Sony Open
HONOLULU, HI・5 HOURS AGO
Golf Digest

Kevin Na and Grayson Murray are taking shots at each other on Twitter, and it’s getting spicy

Bryson vs. Brooks it is not, but on Friday golf witnessed the closest thing to a true Twitter spat between two tour pros since DeChambeau and Koepka stirred the pot last year. This one involved part-time PGA Tour player Grayson Murray and Kevin Na, who is in contention this week at the Sony Open.
HONOLULU, HI・19 HOURS AGO