CourierPostOnline.com covers the latest news in South Jersey including Camden, Gloucester & Burlington Counties along with regional coverage of New Jersey.

PISCATWAY – The roller-coaster ride that was the Salem High School football team’s season reached its final destination on Sunday.

And there couldn’t have been a higher peak.

After claiming their first sectional title in 38 years, the Rams captured their first-ever regional championship with a dominating performance, knocking off previously undefeated Woodbury, 34-8, in the South-Central Group 1 final at Rutgers University’s SHI Stadium. 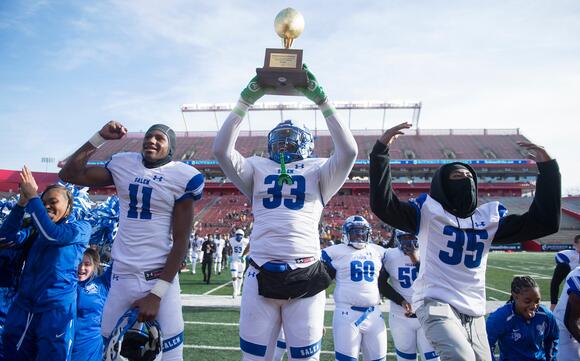 In a season that began in heartache following the passing of head coach Montrey Wright’s mother, Veronica, on Aug. 31, the Rams provided him with one of his finest moments in the season’s finale.

“Besides being engaged to my fiancée, it’s one of the best feelings of my life,” Wright said moments after accepting the regional championship trophy. “This group of guys is very special to me. In the beginning of the season, there was a lot of emotions flying around. But these guys had my back all year. And all I wanted for those guys, the seniors, was to leave with a win.” 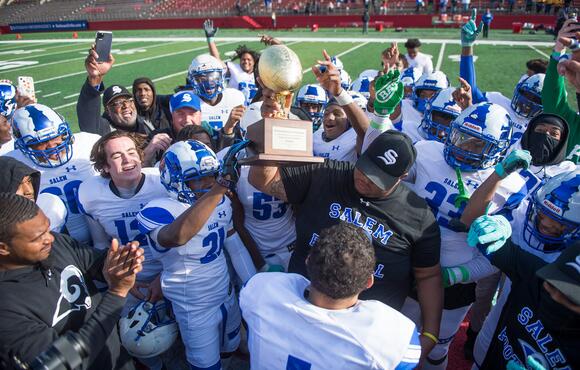 It was Salem’s defense that was flying around in the championship. The Rams recorded eight sacks, including three by junior Amare Smith and two by Jasir Thompson, to go along with two interceptions by Thompson and Anthony Selby. Woodbury’s lone score came on a punt return.

“We came to play,” senior lineman Jayden Wright said. “It feels good that other guys who have played here couldn’t finish, we were able to do it.

“There were so many ups and downs, but we made it through. We stuck together, not just being a team, but being a family.” 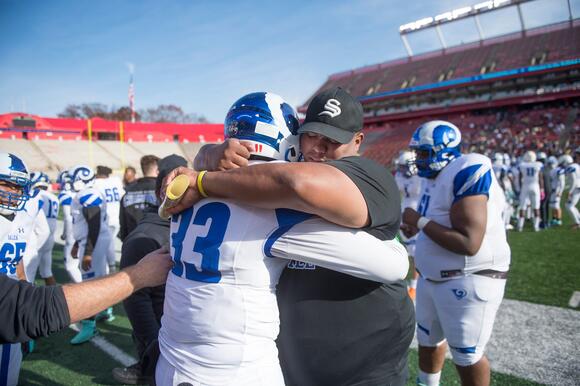 Salem (11-2) held Woodbury to five first downs and just 88 yards of total offense, including 55 on one pass play. The Rams created plenty of havoc, especially in the Woodbury backfield where they recorded 12 tackles for losses (71 yards).

“That’s Coach David Hunt, he’s one of the top defensive coordinators in this game,” Wright said. “He gets these kids’ attention, motivates them and gets them to succeed.” 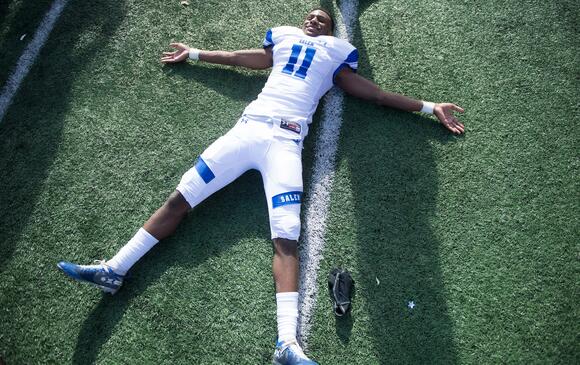 Thompson proudly carried the team’s sledgehammer off the field. It was a fitting end since the senior was one of the players who lowered the boom on the opposing ball carriers.

“We knew they were going to try to pass the ball and we wanted to get a good pass rush,” Thompson said. “I’m just happy we got the job done. It’s a great feeling. All the fans that came out here, we did it for the city. All we got at home is football.”

With a large contingent of fans making the two-hour trek north, the Rams certainly didn’t disappoint. As dominating as the defense was, the offense provided plenty of production, too. 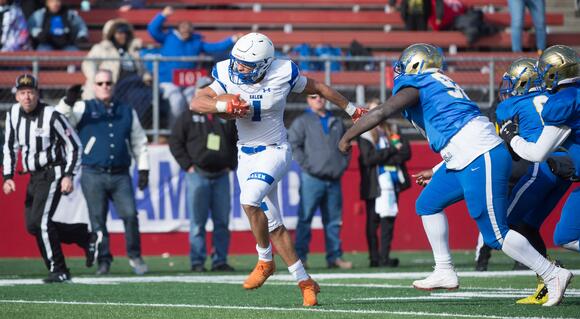 Senior Jessiah Gildersleeve closed out his scholastic career in style, rushing 25 times for 124 yards and two scores. Quarterback Jahki Coates threw TD passes to Ramaji Bundy and Selby, and rushed for a third score to ice the game in the fourth quarter.

In a season that began in 90-plus-degree heat in Ocean City with a 22-20 win over Camden, the Rams finished the job on a chilly December late morning.

“Lot of ups and downs, and it was hard at times, especially in the beginning because we all know Coach Wright was hurting, but we had to show him we all had his back,” said Selby, a junior. “We also like to thank Paulsboro. (Following a 25-17 loss on Sept. 25), we changed everything. They made us work harder, they made us change our attitude, the way we play, everything. We were a different team after that game.” 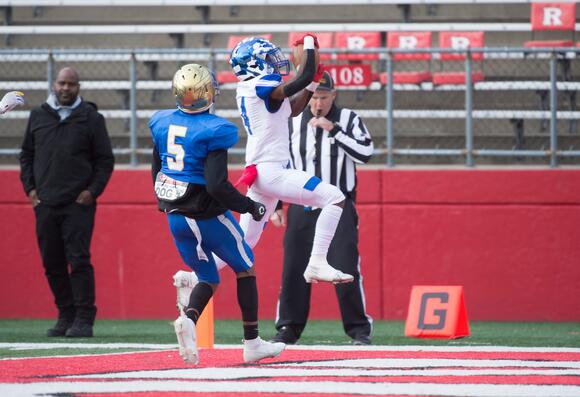 Woodbury (12-1), which won its first sectional title in 12 years, won’t have many great memories of the regional championship, but JaBron Solomon’s punt return won’t soon be forgotten.

Solomon turned in one of the best punt returns of the season, absorbing hits from at least four would-be tacklers, before finding open space on the right sideline and going 65 yards for a touchdown. The score pulled the Thundering Herd within 14-8 early in the third quarter, but they wouldn’t get any closer. 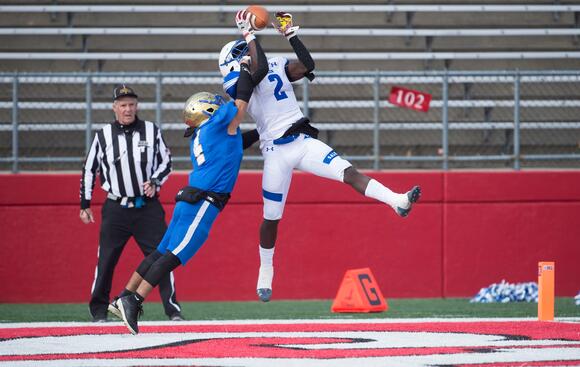 Tom McGurk is a regional sports reporter for the Courier-Post, The Daily Journal and Burlington County Times, covering South Jersey sports for over 30 years. If you have a sports story that needs to be told, contact him at (856) 486-2420 or email tmcgurk@gannett.com . Follow him on Twitter at @McGurkSports. Help support local journalism with a digital subscription .

WASHINGTON (AP) — Russian President Vladimir Putin appears to be preparing to launch an invasion of Ukraine, with more than 100,000 troops positioned around the country. Certainly, the U.S. believes that’s the case and President Joe Biden has warned Ukrainian President Volodymyr Zelenskyy that an attack could come in February.
POLITICS・5 HOURS AGO
CBS News

A bridge collapsed in Pittsburgh shortly before President Biden was set to travel there to tout his infrastructure law. No one was killed. CBS Pittsburgh's Ken Rice has the latest.
PITTSBURGH, PA・10 HOURS AGO
The Associated Press

WASHINGTON (AP) — The House committee investigating the U.S. Capitol insurrection subpoenaed more than a dozen individuals Friday who it says falsely tried to declare Donald Trump the winner of the 2020 election in seven swing states. The panel is demanding information and testimony from 14 people who it...
PRESIDENTIAL ELECTION・12 HOURS AGO
CNN

(CNN) — A Pennsylvania appellate court on Friday struck down a law that allows no-excuse absentee voting, saying it violates the state constitution. The law, known as Act 77, was enacted in late 2019 with strong bipartisan support. But in September, more than a dozen Republicans in the state House -- most of whom voted for the law -- filed suit, asserting that the changes made to absentee voting were unconstitutional and should have been pursued through a constitutional amendment placed before voters.
PENNSYLVANIA STATE・14 HOURS AGO

The AR-15-style rifle that Kyle Rittenhouse used in the shooting of three men during a 2020 protest in Kenosha, Wisconsin, will be destroyed.
KENOSHA, WI・12 HOURS AGO
CBS News

South Carolina federal judge Michelle Childs is under consideration to succeed retiring Justice Stephen Breyer on the U.S. Supreme Court, the White House confirmed late Friday. Childs, 55, is based in Columbia, South Carolina, and was nominated last year by President Biden to serve on the U.S. Court of Appeals...
COLUMBIA, SC・8 HOURS AGO
The Associated Press

Neil Young is knocking Spotify after it sided with Joe Rogan and pulled his music from their service after he gave it an ultimatum on coronavirus misinformation, saying he sounds "better everywhere else" anyway. "I have never been in favor of censorship,” the “Rockin’ in the Free World” songwriter said...
MUSIC・12 HOURS AGO

(NewsNation Now) — Two Houston police officers were released from the hospital Friday following a police chase that ended in a shootout and an hourslong standoff with a barricaded suspect. The situation began about 2:40 p.m. on Thursday as officers responded to a family disturbance call at a home...
HOUSTON, TX・9 HOURS AGO
ABC News

CourierPostOnline.com covers the latest news in South Jersey including Camden, Gloucester & Burlington Counties along with regional coverage of New Jersey.