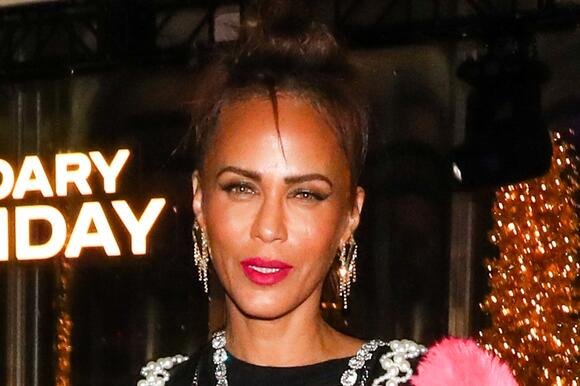 Parker posed before the event in a black dress, which featured an asymmetric hem and sleeves. The “And Just Like That” star’s sleek number featured a mix of prints, including baroque swirls, florals plaid and checks. Her ensemble gained a dose of edge from sequined panels, a leather harness accent studded with pearls a central KISS graphic and furry right sleeve. Parker’s accessories included a silver watch, chain and crystal necklaces as well as Nicole Romano fringe earrings and a clutch with a rainbow lip graphic. Her look’s finishing touch was a knotted hairstyle, resembling a punk rock-like mohawk.

When it came to shoes, the “Empire” actress ‘ look was equally elevated with a sleek pair of Off-White boots. The knee-high style included black leather uppers and squared toes, coordinating smoothly with her dress. The pair gained an added graphic statement from electric blue stiletto heels, totaling at least four inches in height. Parker’s boots brought a pop of color to her look, with a color palette that coordinated with hints of her dress’ hues.

Sleek boots like Parker’s are a go-to style this time of year, due to their full, warmer coverage. Accents like thin heels and geometric toes have also become popular for their ability to streamline outfits instantly. Aside from Parker, Rihanna, Jordan Alexander and Emily Ratajkowski have also worn pairs by Balenciaga, Fendi and Paris Texas in recent weeks.

Parker’s shoe style is bold and eclectic, much like her “And Just Like That” character Lisa Todd Wexley . The star’s red carpet ensembles often include metallic, colorful and sparkly open-toed pumps and sandals, hailing from brands like Gianvito Rossi, Tom Ford and SJP by Sarah Jessica Parker. As Wexley, Parker has also donned a range of statement shoes, including textured and bright boots and pumps by Saint Laurent, Moschino, Giuseppe Zanotti and numerous top brands. Her off-duty ensembles include boots from independent labels like A Plan Application and Stivali, as well as Tory Burch sandals and Off-White sneakers.

Discover all the stars at Nordstrom’s “A Legendary Christmas” party with John Legend.

If you purchase an independently reviewed product or service through a link on our website, Footwear News may receive an affiliate commission. Paris Hilton used an outdoor outing today before “The Tonight Show Starring Jimmy Fallon” as a photo shoot opportunity—complete with daring shoes to match. The “Paris in Love” star posed with her dog, Diamond Baby, ahead of taping “Fallon.” Posing for fans and paparazzi, the influencer wore a black and white polka-dot printed midi dress. The number, which also included miniature cutouts within sparkly crystal bow accents, was layered beneath a black faux fur poncho. Hilton accessorized glamorously, of course,...
BEAUTY & FASHION・1 DAY AGO
Footwear News

If you purchase an independently reviewed product or service through a link on our website, Footwear News may receive an affiliate commission. Nicky Hilton braved the chilly NYC winter weather in a toasty outfit. The businesswoman-designer was spotted in the Manhattan neighborhood of Soho on Monday. She wore a similar look that she donned last month, when she wore the same oversized coat and cozy sweater. For both outings, Hilton layered up in a cream turtleneck sweater with a large beige teddy coat over top. The coat, courtesy of Max Mara, currently retails for $3,790 on FWRD’s website. Hilton added medium-wash skinny...
NEW YORK CITY, NY・1 DAY AGO
Footwear News

Julia Fox and Kanye West have continued their matching couples’ style from day into night. After a memorable public outing at Kenzo’s Fall 2022 show, where they twinned in denim outfits, the duo took Paris by storm again—this time, in all leather. Following Rick Owens’ “glamsleazy” Fall 2022 menswear show last week, Fox stepped out for dinner with West in a red leather dress by the American designer. The one-shoulder number featured a gray lining and asymmetric hem, which stretched to her thighs. Fox’s look centered on the dress, framed by a long black leather trench coat and silver pyramid-shaped earrings. Similarly to...
BEAUTY & FASHION・2 DAYS AGO
The Independent

Watch: Nicole Ari Parker Addresses Being Kim Cattrall's Replacement. Sex and the City fans were understandably crushed when they learned Kim Cattrall, who played the hilarious, sex-positive Samantha, wasn't going to be in HBO Max's reboot—some, so much so, that when And Just Like That... premiered, they directed their anger at Nicole Ari Parker, whose new character just so happens to be friends with all three members of the former foursome.
CELEBRITIES・12 DAYS AGO
RNB Cincy 100.3

Julia Fox and Kanye West's arrival in double denim sparked a reaction from Twitter users. Here are the best memes on the celebrity couple's arrival in Paris.
DESIGNERS & COLLECTIONS・2 DAYS AGO
Footwear News

Jennifer Coolidge took a classic approach to her late-night talk show appearance. The actress was on “The Tonight Show Starring Jimmy Fallon” on Thursday to discuss her role on HBO’s “White Lotus” and how she got involved with Ariana Grande’s music video for “Thank You Next.” On the show, Coolidge wore a chic, traditional look consisting of a black lace mini dress from Dolce & Gabbana. The dress featured long sleeves and a scoop neckline. She added oversized gold hoop earrings as well as a few gold rings to the outfit. Her blond locks were worn in polished waves, adding to...
BEAUTY & FASHION・4 DAYS AGO

Naomi Campbell looked angelic during her latest runway turn. The supermodel closed an emotional Louis Vuitton fall ‘22 men’s show in Paris on Thursday. After posing on the red carpet, Campbell later appeared on the runway to model  Virgil Abloh’s last collection for the french luxury fashion house. For the ensemble, Campbell wore a white overcoat that doubled as a blazer on top of a white button-up featuring lapels that jutted out in the front of the outfit. She also donned slightly loose white trousers. The Louis Vuitton team accessorized her with a white baseball cap and a white tie. View this...
DESIGNERS & COLLECTIONS・3 DAYS AGO
Footwear News

Kristen Stewart gave suiting a punk rock edge for a “Spencer” screening in New York City this week. The “Twilight” star suited up in a Bella Freud suit, which featured a maroon, navy and white pattern. The blazer and pants featured a velvety texture, giving her ensemble a relaxed softness. Stylist Tara Swennen paired the set with a sultry black lace crop top by Dolce and Gabbana, featuring a deep neckline. The look was finished with Stewart’s go-to silver lock necklace by Jillian Dempsey. View this post on Instagram A post shared by Tara Swennen (@taraswennen) When it came to shoes, Swennen...
NEW YORK CITY, NY・2 DAYS AGO
Outsider.com

It’s been a busy year for actress and model Nicole Ari Parker and her husband, Austrian actor Boris Kodjoe. The power couple has worked on multiple projects together both on-screen and off. In an exclusive interview with ET’s Rachel Smith, Parker chats about if we can expect to see...
CELEBRITIES・12 DAYS AGO
Footwear News

If you purchase an independently reviewed product or service through a link on our website, Footwear News may receive an affiliate commission. Rosamund Pike took winter dressing to new heights at Dior’s Spring 2022 couture show. The “Wheel of Time” star arrived with a star-studded front row crew, including Cara Delevingne, Madelaine Petsch and Claire Foy. The “I Care A Lot” star wore a black midi-length dress for the occasion, which featured a puffer-like texture. The short-sleeved style also included a button-up front with two pockets, cinched with a buckled webbing belt. Pike’s look was layered over a white collared shirt and...
DESIGNERS & COLLECTIONS・15 HOURS AGO

If you purchase an independently reviewed product or service through a link on our website, Footwear News may receive an affiliate commission. Rebel Wilson plays with print in a jacket perfect for the winter months. The “Pitch Perfect” star was spotted while out and about in West Hollywood, Calif., on Monday in a Balmain tweed bomber jacket that had an entrancing red, black and white plaid print accented with big gold buttons. Underneath, she wore a black sheer top that helped streamline the outfit. On the lower half, she slipped on a pair of black faux leather leggings that added some edginess...
APPAREL・15 HOURS AGO
blackfilm.com

TOKYO (AP) — French fashion designer Manfred Thierry Mugler, whose dramatic designs were worn by celebrities like Madonna, Lady Gaga and Cardi B, has died. He was 73. He died Sunday, his official Instagram account said. “May his soul Rest In Peace,” it said in a post that was all black with no image. It […]
DESIGNERS & COLLECTIONS・1 DAY AGO

Sofia Richie knows how to look stylish, even at the gym. In a new photo posted on her Instagram story today, the media personality poses alongside fitness guru Megan Roup. In the quick snap, the daughter of Lionel Richie sported an athleisure look that included a long-sleeve seamless black top featuring a white zipper closure that covered her neck. The model pulled her blond hair back in a loose ponytail and opted for subtle accessories, which were small diamond stud earrings. Richie paired her top with black leggings from APL. The leggings included a red and white design below one knee and...
BEAUTY & FASHION・4 DAYS AGO
Footwear News

If you purchase an independently reviewed product or service through a link on our website, Footwear News may receive an affiliate commission. Kristen Stewart embraces a relaxed black and white style palette for “The Late Show With Stephen Colbert.” The “Twilight” star attended the show yesterday to talk about what it was like playing Princess Diana Spencer in her latest film, “Spencer.” The drama debuted on Nov. 5, 2021 and Stewart was nominated for a Best Actress Golden Globe award. For the ensemble, Stewart donned a white button-down that was left open and paired it with a white tank top underneath. Along...
BEAUTY & FASHION・21 HOURS AGO
Architectural Digest

On Sex and the City, Carrie Bradshaw once quipped: “In New York, they say, you’re always looking for a job, a boyfriend, or an apartment.”. The quote seems fitting for actress Nicole Ari Parker, who is one of the new cast members on the SATC reboot And Just Like That… on HBO Max. Parker, best known for roles in Soul Food, Boogie Nights, and Empire, portrays Lisa Todd Wexley (aka LTW) a documentarian, humanitarian, wife, and mother of three, who has appeared on Vogue’s International Best Dressed List.
NEW YORK CITY, NY・6 DAYS AGO
Footwear News

If you purchase an independently reviewed product or service through a link on our website, Footwear News may receive an affiliate commission. Blake Lively bundled up in style while out and about today with husband Ryan Reynolds in New York. The “Gossip Girl” actress was prepared for the cold weather in a fluffy oversized navy blue coat. She layered the jacket over a pair of light-wash blue jeans by DL1961. She matched the navy of her coat with a similarly shaded beanie that had a multicolored pattern and a pompom on top. She also kept warm with a pair of suede beige...
CELEBRITIES・1 DAY AGO