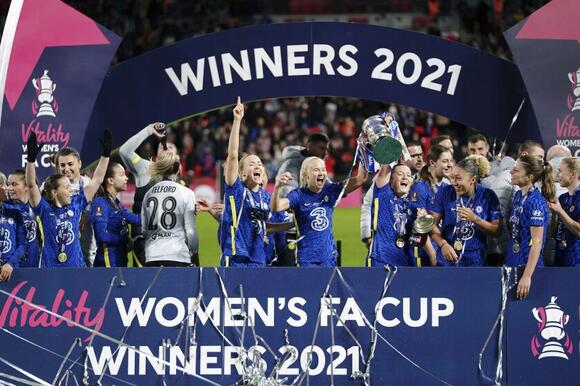 Chelsea won the Women's FA Cup on Sunday to clinch a domestic treble for the first time.

Australia striker Sam Kerr scored a second-half double as Chelsea cruised to a 3-0 victory over Arsenal at Wembley Stadium in the final of a competition that was delayed because of the coronavirus pandemic. Fran Kirby had given Chelsea a third-minute lead.

The match took place exactly 100 years to the day since England's Football Association banned women from playing football on league-affiliated grounds because it deemed it “most unsuitable” for them to play the game. The ban lasted nearly 50 years.

England captain Heather Knight says reserve days should be introduced into the Women’s Ashes schedule and repeated her call for five-day Tests after rain wrecked the T20 leg of the series. England and Australia once again shared the points after their final T20 in the Women’s Ashes was abandoned...
WORLD・2 DAYS AGO
The Independent

Manchester United’s Marcus Rashford scored a last-second winner as they beat West Ham United 1-0 at Old Trafford in the Premier League on Saturday to move up to fourth spot. Substitute Rashford tapped in a low cross from Edinson Cavani deep into stoppage time after United had broken down the left flank with the final move of the match. The win means United move above West Ham with 38 points from 22 matches while the Hammers are now fifth on 37 from 23.Until Rashford’s goal finished off an attack started by Cristiano Ronaldo and also featuring Anthony Martial there had...
PREMIER LEAGUE・2 DAYS AGO

A key clash in the battle for European places will be on show at Old Trafford on Saturday afternoon, where Manchester United host West Ham United.David Moyes’ side have been extremely impressive for the majority of this term and remain in fourth in the Premier League table, where a huge battle is developing between at least four sides.These teams met twice in short order earlier in the season, United winning in the league in dramatic fashion before the Hammers knocked them out of the Carabao Cup, but there’s arguably even more at stake this time around - in part due...
PREMIER LEAGUE・2 DAYS AGO

England captain Heather Knight has reiterated calls for reserve days to be introduced in ICC tournaments and important bilateral series following the abandonment of three of England’s last four matches in Australia due to rain. The first of those, in the Twenty20 World Cup last year, meant England were...
SPORTS・1 DAY AGO
SB Nation

Tobin Heath’s 92nd minute equalizer ended Arsenal’s run of three straight defeats in all competitions. The Gunners were on the verge of losing their second straight game in the WSL before Heath’s goal, which leaves Arsenal top of the WSL, two points ahead of Manchester United in second, with a game in hand, and four points ahead of Chelsea, who have a game in hand on Arsenal.
WORLD・1 DAY AGO
The Independent

In a pivotal week, Premier League clubs are looking to push through deals as the transfer window shuts.Tottenham look keen to make moves with Antonio Conte not hiding his dissatisfaction as the club’s inability to strengthen yet, with Dele Alli and Giovani lo Celso both likely to be pushed out the door after being left out of the squad for the 2-0 defeat to Chelsea. While Arsenal are also in the market for a striker, with Fiorentina’s Dusan Vlahovic top of their list, though Juventus may move should it emerge that the Viola cannot hold on to the Serbian forward...
PREMIER LEAGUE・22 HOURS AGO
The Independent

Substitute Tobin Heath scored an injury-time equaliser as Women’s Super League leaders Arsenal snatched a 1-1 draw at Manchester City Heath drilled home in the second of six added minutes to ensure the visitors avoided a second straight defeat in the league following their shock loss to Birmingham a fortnight ago.Khadija Shaw had given City the lead in controversial circumstances after 65 minutes, the Jamaican international tapping home from close range from Lauren Hemp’s low cross.Arsenal were furious that play had been allowed to continue when the ball deflected off the referee in the build-up to the goal, but their...
WORLD・1 DAY AGO

What a game that was from Diego Simeone's men, trailing 2-0 before scoring three goals in the second half – including two in stoppage time – to claim all three points. An epic, monumental comeback. Whew! Take a breather, everyone. Has this been the most Atletico Madrid game...
PREMIER LEAGUE・2 DAYS AGO
San Diego Union-Tribune

Hands up: Outfield player to play as goalie at African Cup

Manchester City travel to the south coast on Saturday evening to try and extent their lead at the top of the Premier League by beating Southampton.Saints held Pep Guardiola’s men to a goalless draw back in October but today’s visitors have been in scintillating form in recent months, winning their last 12 consecutive league fixtures and building up a lead of 11 points to second-placed Liverpool and 14 to Chelsea in third.Kevin De Bruyne’s superb curling finish was enough to secure victory over the Blues last time out, and the Belgian could start up front at St. Mary’s with Raheem...
PREMIER LEAGUE・2 DAYS AGO

Mikel Arteta bemoaned a “slow” and “leggy” Arsenal performance before casting doubt over any January signings as the Gunners were held to a goalless stalemate by Premier League bottom side Burnley The Clarets have seen a host of games postponed this month due to not having enough players available and fell to the foot of the table as their rivals were able to fulfil fixtures.Wins for fellow relegation candidates Norwich and Newcastle earlier in the weekend only heaped pressure on Burnley, but Sean Dyche’s side battled to a hard-fought point against a below-par Arsenal.The Gunners are still without a win...
PREMIER LEAGUE・1 DAY AGO
The Independent

Welcome to The Independent’s live coverage of a huge London derby between Chelsea and Tottenham at Stamford Bridge. Thomas Tuchel’s side have already beaten Spurs three times so far this season, scoring seven goals and keeping three clean sheets in the process. But Chelsea have struggled of late as their title ambitions have slipped away. They now sit 13 points off Manchester City as securing a top four place becomes a more realistic target.Meanwhile, Spurs are unbeaten in nine Premier League games under Antonio Conte and are now in a superb position to qualify for next season’s Champions League....
PREMIER LEAGUE・1 DAY AGO
San Diego Union-Tribune

Midfielder Samuel Shashoua switches to US from England

Thomas Tuchel hopes Hakim Ziyech’s wonder goal and victory over Tottenham will hand Chelsea renewed confidence following an indifferent run of form as they look to shut down any worries about a top-four Premier League finish.Ziyech’s moment of magic teed up Chelsea’s 2-0 win over Spurs on Sunday, their third victory against their London rivals in this month.Thiago Silva’s header cemented Chelsea’s first league win in five outings since their success at Aston Villa on Boxing Day.Now the bulk of Chelsea’s players can head into a week off satisfied to have reasserted some Premier League authority, with the Blues remaining...
PREMIER LEAGUE・20 HOURS AGO