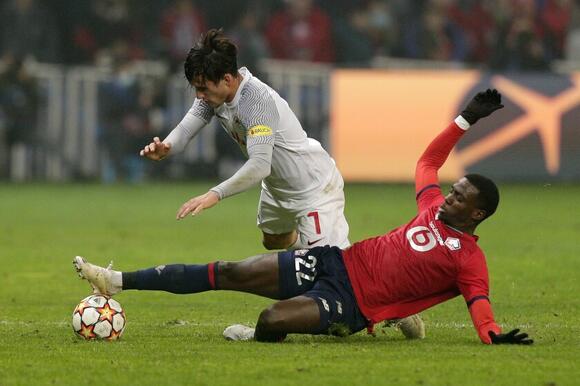 Weah did not play in Lille's 2-1 win against Troyes in the French league on Saturday because of the injury.

“He got injured during training on Friday, we waited for the examination's results," Lille coach Jocelyn Gourvennec said after the game in remarks quoted by local newspaper La Voix Du Nord. “It's a quadriceps injury."

Lille tops Group G in the Champions League and the French champions will qualify for the knockout stage if they avoid defeat in the last round of games. Lille will also be without the suspended Jonathan Bamba and Xeka in Germany.

Cristiano Ronaldo is expected to be available for Manchester United, with Harry Maguire also in contention to play in Saturday's Premier League trip to Aston Villa.Ronaldo was left out of the United squad by interim manager Ralf Rangnick for the 1-0 FA Cup third round win over Villa on Monday night after picking up a minor hip injury.The Portuguese was left out as a precaution, with Jadon Sancho and Phil Jones also kept at home after picking up minor issues of their own.All three players are available to Rangnick for the second part of the double header against Villa, while...
PREMIER LEAGUE・2 DAYS AGO
San Diego Union-Tribune

Ralf Rangnick has no plans to replace Harry Maguire as Manchester United captain, despite Cristiano Ronaldo’s claim that the squad's mentality must improve to avoid a "nightmare" season.In an interview with television broadcasters this week, Ronaldo said that there needed to be a shift in attitude within the Old Trafford dressing room in order for results to improve.The five-time Ballon d'Or winner rejoined United from Juventus in August, having won eight major honours during his first spell at the club between 2003 and 2009, including three Premier League titles and the Champions League.Ronaldo has returned as the oldest outfield player...
PREMIER LEAGUE・2 DAYS AGO
San Diego Union-Tribune

Cristiano Ronaldo has reportedly gone home from a training session earlier than the rest of his teammates, with a suspected thigh injury. Ronaldo missed Monday night’s FA Cup game against Aston Villa with a hip injury, and this latest knock is said to be unrelated. The Sun has reported...
PREMIER LEAGUE・2 DAYS AGO
firstsportz.com

Garry Neville believes that the premier league teams along with the EFL teams must be made to play their games instead of postponing the games due to the cited reason of players being unavailable. This comes in after Arsenal requested for postponement of their fixture against Tottenham. Talking on Friday...
PREMIER LEAGUE・1 DAY AGO
The Independent

Arsenal have submitted a formal request to the Premier League asking to postpone their north London derby fixture against Tottenham on Sunday. Mikel Arteta’s side are suffering from several absences due to a Covid outbreak, injuries and players being away on international duty at the Africa Cup of Nations. The Premier League confirmed the request had been lodged in a statement released on Friday evening and said they will take a final decision on Saturday.“The Premier League has received a postponement request from Arsenal FC relating to their away match against Tottenham Hotspur, due to be played at 4.30pm...
PREMIER LEAGUE・2 DAYS AGO
The Independent

Thomas Tuchel has admitted Chelsea’s Premier League title race could be over if the Blues lose at “benchmark” club Manchester City on Saturday.Chelsea trail Pep Guardiola’s City by 10 points heading into the weekend’s Etihad Stadium clash, with Andreas Christensen the Blues’ latest Covid-19 absentee.Chelsea toppled City 1-0 in Porto in May to win the Champions League but Blues boss Tuchel admitted Guardiola’s men are still the best in the business in England.City have won 11 Premier League matches on the spin, while second-placed Chelsea have only lost once in 15 but have also drawn six matches in that stint.Asked...
PREMIER LEAGUE・2 DAYS AGO
San Diego Union-Tribune

Both Brighton and Crystal Palace will be looking to continue their efforts to get into the top half of table by picking up all three points in the A23 derby.Both sides have been credited with playing impressive football this season and have been praised for their style of play, particularly in the attacking third of the pitch. The two sides have also been lauded for their use of young players with the likes of Tariq Lamptey, Conor Gallagher and Michael Olise impressing when given the opportunity for their respective team.A dramatic 1-1 draw occurred the last time the two...
SOCCER・2 DAYS AGO
The Independent

Robert Lewandowski scored a hat-trick as Bayern Munich moved six points clear at the top of the Bundesliga with a 4-0 win at Cologne.Lewandowski netted the opener after just nine minutes before Corentin Tolisso doubled Bayern’s lead prior to the interval.Poland international Lewandowski then scored his second after the hour mark and completed his treble with 16 minutes remaining.The second-half strikes took Lewandowski to 300 Bundesliga goals as he became the first player to reach the landmark since Gerd Muller in 1976.Bayern also eclipsed their own record by scoring for the 66th consecutive league match. The win restores Bayern’s advantage...
SOCCER・1 DAY AGO
The Guardian

Who crossed a borden? Who signed on? Who went low?
PREMIER LEAGUE・2 DAYS AGO