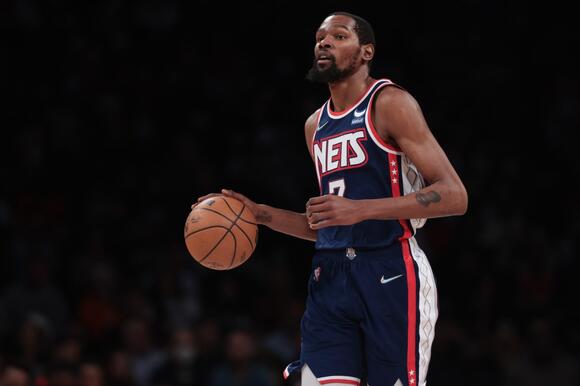 Kevin Durant and the Brooklyn Nets lost to the the Chicago Bulls on Saturday night.

Kevin Durant and the Brooklyn Nets lost to the Chicago Bulls in Brooklyn on Saturday night by a score of 111-107.

After the game 2014 MVP Kevin Durant spoke to reporters.

"They made timely shots, we didn't, that's really what it is," Durant said. "We just gotta go out there and play with some force and confidence like we want to win."

The Bulls are just a half game back of the Nets, and the additions of Lonzo Ball, DeMar DeRozan and Alex Caruso have been huge for them.

The full clip of Durant speaking after the game can be watched here.

Patrick Beverley has been ruled out for Sunday night's game between the Brooklyn Nets and Minnesota Timberwolves.
NBA・1 DAY AGO
Chicago Tribune

Alex Caruso is out 6-8 weeks with a wrist fracture suffered during Grayson Allen’s flagrant foul that drew the fury of Chicago Bulls staff: ‘Really hope the league takes a hard look’

The rivalry between the Chicago Bulls and the Milwaukee Bucks doesn’t need any extra heat this season, but Grayson Allen was happy to pour gasoline on the fire Friday night. Allen earned an ejection and a flagrant-2 foul after throwing Alex Caruso to the court to prevent a breakaway dunk in the Bulls’ 94-90 road loss to the Bucks. But those repercussions couldn’t offset the ensuing disaster ...
NBA・2 DAYS AGO
Sportsnaut

With the 2021-22 NBA season in full swing, basketball fans are putting on their jerseys and filling up arenas around
NBA・2 DAYS AGO
Chicago Tribune

The Chicago Bulls came inches from claiming the first round of battles with the Milwaukee Bucks this season, falling short by four points in a 94-90 loss Friday night at Fiserv Forum. It wasn’t the prettiest game for either team — both shot under 20% from 3-point rangein a vintage Midwestern slugfest as the Bucks and Bulls jockey for position at the top of the Eastern Conference. The Bulls ...
NBA・2 DAYS AGO

Bucks guard Grayson Allen addressed the Flagrant 2 foul he committed on Chicago Bulls guard Alex Caruso with a string of messages in his Discord server Saturday afternoon. "It was very unfortunate how it played out," Allen wrote. "I jumped to block it with my left and as I'm spinning went to grab the ball with my right hand not throw him down. It was a really hard fall and I'm glad he's okay. If I could do the play over again knowing he'd fall like that I wouldn't make the play."
NBA・1 DAY AGO
Chicago Tribune

In the final three minutes of Monday’s game in Oklahoma City, the Chicago Bulls panicked. Zach LaVine and Troy Brown Jr. ran straight into half-court traps. Nikola Vučevic sent off-balance 3-pointers sailing past the rim. Billy Donovan called timeouts in an urgent attempt to calm his team, watching as the Thunder carved a 28-point Bulls lead down to a single point. The bell ultimately saved ...
NBA・19 HOURS AGO
FastBreak on FanNation

Nets Injury Report Against The Timberwolves

The Brooklyn Nets have announced their injury report for Sunday night's game against the Minnesota Timberwolves.
NBA・2 DAYS AGO
670 The Score

In perhaps the strongest public comments yet from anyone in an angry Bulls organization, center Nikola Vucevic on Sunday called out Milwaukee Bucks guard Grayson Allen for his flagrant-2 foul on Chicago guard Alex Caruso on Friday.
NBA・1 DAY AGO

James Harden reportedly intends to become an unrestricted free-agent this offseason for the first time in his career with the plan to “explore other opportunities.”
NBA・5 HOURS AGO
Sportsnaut

Bulls Starting Lineup Against The Thunder

The Chicago Bulls have announced their starting lineup for Monday's game against the Oklahoma City Thunder.
NBA・20 HOURS AGO
Sportsnaut

Shorthanded Bulls look to get on track against Thunder

After a hot start to the season, the Chicago Bulls have struggled over the last two weeks. Heading into Monday’s
NBA・1 DAY AGO

The Brooklyn Nets have announced their injury report for Monday's game against the Los Angeles Lakers.
NBA・5 HOURS AGO
FastBreak on FanNation

DeMar DeRozan has been ruled out for Monday's game between the Chicago Bulls and Oklahoma City Thunder.
NBA・20 HOURS AGO
FastBreak on FanNation

Nikola Vucevic is listed as questionable for the game between the Chicago Bulls and Oklahoma City Thunder.
NBA・1 DAY AGO
charlottenews.net

The wife of NBA legend Steph Curry has called the gossip 'ridiculous'. The wife of Golden State Warriors star Steph Curry, Ayesha, has addressed rumors that the couple is in an open relationship, labeling the speculation 'disrespectful'. Claims circled on gossip blogs in recent weeks and cited an anonymous tip...
CHARLOTTE, NC・14 DAYS AGO
FastBreak on FanNation

Ja Morant of the Memphis Grizzlies tweeted about the Los Angeles Rams and Tampa Bay Buccaneers game.
NBA・1 DAY AGO
FastBreak on FanNation

The Phoenix Suns are steamrolling the NBA once again. They became the first team to win 30 games this season due to their elite offense and even better defense. It’s not a matter of if, but who on Phoenix’s roster gets named an All-Star. Devin Booker has been...
PHOENIX, AZ・17 DAYS AGO
92.3 The Fan

With All-Star fan voting ending Saturday night at midnight, Cavaliers forward Kevin Love made one last plea for two of his teammates – Darius Garland and Jarrett Allen plus other notes.
NBA・2 DAYS AGO