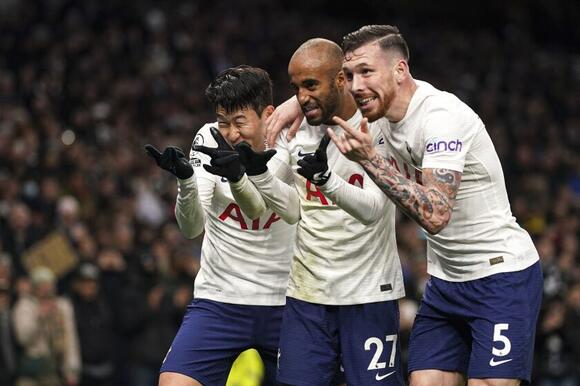 Antonio Conte’s unbeaten run in the Premier League at Tottenham goes on.

So does Harry Kane’s goal drought.

Lucas Moura, Davinson Sanchez and Son Heung-min were the scorers in Tottenham’s 3-0 win over Norwich on Sunday.

In four league matches under Conte, Tottenham has won three and drawn the other, conceding only one goal. He has, though, lost in the Europa Conference League at Slovenian minnow Mura.

Kane, the top scorer in the Premier League last season, remains on just one goal this campaign having missed a couple of half-chances at Tottenham Hotspur Stadium.

Spurs climbed to fifth place and is two points off fourth-place West Ham with a game in hand.

Lucas opened the scoring with a stunning solo goal in the 10th minute, after playing a one-two with Son and then beating a defender before smashing a shot into the top corner from 25 meters (yards).

Sanchez lashed in from close range in the 67th to make it 2-0 after the ball dropped invitingly for him after Ben Davies flicked on a corner.

Davies then made a piercing run into the area and passed to Son, who went round a defender and shot low into the net in the 77th.

Washington (CNN) — The House committee investigating the January 6 attack on the US Capitol has subpoenaed and obtained records of phone numbers associated with one of former President Donald Trump's children, Eric Trump, as well as Kimberly Guilfoyle, who is engaged to Donald Trump Jr., sources tell CNN.
U.S. POLITICS・8 HOURS AGO
NBC News

White House warns Russian invasion of Ukraine may be imminent

WASHINGTON — The White House believes Russia could launch an invasion of Ukraine at any moment, press secretary Jen Psaki said Tuesday, warning that an “extremely dangerous situation” is building along the Ukrainian border. "We believe we're now at a stage where Russia could at any point...
POTUS・12 HOURS AGO
ABC News

A showdown between the nation’s major airlines, the FAA and AT&T and Verizon appears to be cooling after both companies agreed to pause a portion of its 5G-C rollout.
ECONOMY・3 HOURS AGO
The Hill

After weeks of pharmacies selling out of rapid tests, Americans now have an easier option than scouring local retailers: a new government website that sends tests to your home. COVIDTests.gov went live on Tuesday in a “limited capacity” to work out any issues ahead of an official launch on Wednesday,...
PUBLIC HEALTH・13 HOURS AGO

Microsoft buys game maker Activision Blizzard for about $70B

Microsoft is paying the enormous sum of nearly $70 billion for Activision Blizzard, the maker of Candy Crush and Call of Duty, a deal that would immediately make it a larger video-game company than Nintendo while raising questions about the deal’s possible anti-competitive effects. The all-cash $68.7 billion deal...
BUSINESS・11 HOURS AGO
CBS News

Wellington — A volcano that exploded on the Pacific island nation of Tonga has almost disappeared from view, new images revealed Tuesday, with swathes of the island nation smothered in grey ash and dust or damaged by a tsunami. Tonga has been virtually cut off from the rest of the world since Saturday's volcanic blast — one of the largest recorded in decades.
ENVIRONMENT・15 HOURS AGO
ABC News

The family of Martin Luther King Jr. was among a coalition of civil rights groups in Washington Monday who pressured lawmakers to pass federal voting rights legislation.
WASHINGTON STATE・1 DAY AGO
The Associated Press

Warriors minority owner under fire for comments on Uyghurs

SAN FRANCISCO (AP) — A Golden State Warriors minority owner who said “nobody cares” about the Uyghurs in China is under fire and the team is distancing itself from him. On the latest edition of his All-In Podcast, billionaire Chamath Palihapitiya dismissed the situation in China, which is accused by the U.S. of genocide and crimes against humanity because of the treatment of the Uyghurs Muslim minority population in the Xinjiang region in northwest China.
NBA・11 HOURS AGO

(CNN) — New York Attorney General Letitia James' office says it needs the testimony of former President Donald Trump and two of his adult children to determine their knowledge of what investigators say they have identified as numerous "misleading statements and omissions" in tax submissions and financial statements used to obtain loans.
POTUS・1 HOUR AGO
CBS News

The Senate is headed for a showdown over voting rights as Democrats struggle to pass legislation that would protect the rights of voters and the integrity of federal elections. Scott MacFarlane has the latest.
CONGRESS & COURTS・7 HOURS AGO