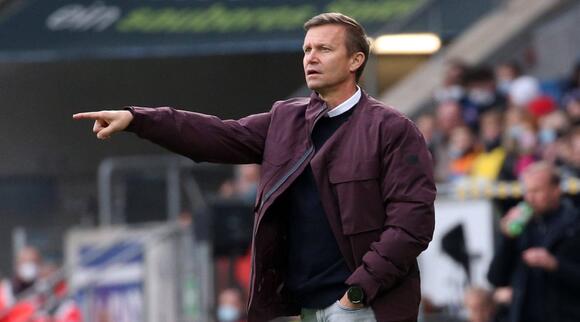 However, Marsch's success didn't follow him across the border to Germany. RB Leipzig sits in 11th in the Bundesliga table after its third straight league loss on Friday—a 2–1 defeat to Union Berlin that Marsch missed after testing positive for COVID-19.

And with only one win from five in a tough Champions League group (Man City, PSG, Club Brugge) this season, RB Leipzig won't advance to the knockout stages for the first time since 2018/19.

"I am very grateful to be part of the Red Bull family and to have been given this opportunity," Marsch said in a statement . "Up until the very end, I remained hopeful that after a troubled start to the season and inconsistent performances, we would find more cohesion and stability as a group and turn our fortunes around.

"Unfortunately, we didn't manage to do that—after a discussion with Oliver Mintzlaff, we came to the joint decision to make a change in the coaching position. I keep only positive thoughts in my mind and wish for the club, the team, the staff and all the fans that RB Leipzig finds its way back to its old strengths very quickly and, given the quality in the team and in the club, I am sure that the club will achieve its goals."

Upon Marsch's arrival at the club over the summer, RB Leipzig lost several starters to the transfer market. In total, including the departures of Dayot Upamecano and Marcel Sabitzer to Bayern and Ibrahima Konaté to Liverpool, RB Leipzig earned $123.2 million off player sales this summer while buying six players for $118.3 million, per Transfermarkt .

But six losses in the first 14 league games and missing out on the Champions League knockouts proved to be too much for a club that has finished in the top three in the Bundesliga each of the last three seasons and made the UCL semifinals in 2019/20.

Ronaldo was also included in the World11 at the expense of Mohamed Salah, while the women's awards on the night faced backlash from current players.
FIFA・2 DAYS AGO
The Independent

Arsenal are optimistic their Carabao Cup semi-final second leg against Liverpool will go ahead as planned on Thursday night.The Gunners successfully appealed to the Premier League to have Sunday’s north London derby away to Tottenham called off in the absence of a number of players.Injuries, suspension, coronavirus cases and losing players to the Africa Cup of Nations saw Mikel Arteta’s ranks depleted enough for the league to postpone their scheduled fixture.However, the PA news agency understands there have been no additional Covid-19 cases in the past two days and a couple of players are now likely to be fit following...
PREMIER LEAGUE・2 DAYS AGO
The Independent

What the papers sayScotland and Aston Villa midfielder John McGinn is of major interest to Manchester United The Telegraph reports that 27-year-old McGinn is “admired” by compatriot Darren Fletcher who became technical director at Old Trafford last year. On incomings at Villa, the Daily Mail reports that the club expects to complete a loan deal for 32-year-old Roma goalkeeper Robin Olsen after a medical on Tuesday. Villa are also reportedly interested in 25-year-old Brighton midfielder Yves Bissouma.Newcastle have offered 30 million euros to Italian side Atalanta for Duvan Zapata, according to the Daily Record. The Magpies are reportedly working on...
PREMIER LEAGUE・2 DAYS AGO

Manchester United rode their luck in the first half, but were ruthless in the second to continue their push for the top four
PREMIER LEAGUE・1 DAY AGO
Sportsnaut

Jesús Ferreira joined his dad David as the first father-son combination of higher-priced designated players in the history of Major League Soccer, agreeing to a four-year contract with Dallas
MLS・1 DAY AGO

Liverpool assistant manager Pep Lijnders has no complaints over recent Covid-19 postponements both in the Premier League and the Carabao Cup as he stated his trust in club medical departments to make the right call.Liverpool travel to the Emirates Stadium on Thursday to play the second leg of their League Cup semi-final against Arsenal a match which should have been the first leg two weeks ago before a coronavirus outbreak within the Reds camp saw it postponed.Since then, Arsenal had Sunday’s north London derby called off due to a shortage of players, a decision which prompted an angry response...
PREMIER LEAGUE・1 DAY AGO
Sports Illustrated

A big three-match window is on the horizon for the U.S. as it attempts to qualify for the World Cup, and a number of variables surround the available players to be called in.
MLS・2 DAYS AGO
The Independent

Ralf Rangnick considers the issue with Anthony Martial “resolved” following talks with a player he claimed refused to be involved in Manchester United’s trip to Aston VillaUnited had two goalkeepers among their eight substitutes – one short of the number allowed – for Saturday’s 2-2 draw at Villa Park where the France international was conspicuous by his absence.Martial has made no secret of his desire to leave United this month but Rangnick’s claim that the forward “didn’t want to be in the squad” in Birmingham still shocked onlookers.The 26-year-old took to Instagram later that night to say he “will...
PREMIER LEAGUE・2 DAYS AGO
San Diego Union-Tribune

'Dixie' Dörner, the 'Beckenbauer of the East,' dies at 70

Hans-Jürgen "Dixie" Dörner, one of East Germany and Dynamo Dresden's greatest soccer players who was called the "Beckenbauer of the East," has died
SOCCER・1 DAY AGO

Steven Bergwijn was delighted to follow Antonio Conte’s instructions and deliver a dramatic stoppage-time win for Tottenham at Leicester.The Netherlands international scored twice in 79 seconds of time added on to turn Spurs’ 2-1 deficit into a memorable 3-2 victory.He was sent on in the 78th minute, two minutes after James Maddison had put the Foxes on course for the three points in their first Premier League game of 2022 with a clear instruction from Conte – to score.Bergwijn, who has been subject of a bid from Ajax in the January transfer window, duly obliged, firing home from close range...
PREMIER LEAGUE・10 HOURS AGO
The Independent

Liverpool midfielder Alex Oxlade-Chamberlain will miss Thursday’s Carabao Cup semi-final second leg against Arsenal but his ankle injury is not serious, assistant manager Pepijn Lijnders has said.The 28-year-old was forced off in the second half of Saturday’s 3-0 Premier League victory over Brentford at Anfield, soon after scoring the Reds’ second goal.The problem rules him out of this week’s return to his former club Arsenal, but the club are hopeful he could be back in action for this weekend’s trip to Crystal Palace.Lijnders told the club’s website, www.liverpoolfc.com: “I spoke yesterday with him and he thinks it’s not that...
PREMIER LEAGUE・1 DAY AGO
The Independent

Leicester vs Tottenham prediction: How will Premier League fixture play out tonight?

Leicester City face Tottenham Hotspur tonight in the Premier League as both sides look to get back on track following a number of fixture postponements. Tonight’s match was originally scheduled to be played in December but was called off due to a number of Covid-19 cases in the Leicester squad. FOLLOW LIVE: Team news and all the action as Brentford host Manchester UnitedLeicester then had three other matches postponed, including Saturday’s trip to Burnley, and have not played a Premier League match since 28 December. Brendan Rodgers side sit 10th in the table while Spurs lie in sixth, but with...
PREMIER LEAGUE・1 DAY AGO
Sports Illustrated

For the final two windows of World Cup qualifying, Concacaf has introduced another element to the competition. Despite going eight of 14 matchdays without video assistant referees, the region announced Wednesday that the final six will indeed feature VAR capability, adding another layer of potential officiating and call-correction to the proceedings after ironing out the personnel and infrastructure issues that prevented it from being implemented in the first place.
UEFA・6 HOURS AGO

Was this the attitude Cristiano Ronaldo demanded?Whatever about refusing to accept criticism, Manchester United’s new generation refused to accept anything other than victory.It was certainly the response, and the result, Ralf Rangnick and his team needed.On a night when they were often second best to Brentford, and mere days after Ronaldo gave such a pointed interview about the attitude of younger players, three of the club’s youth graduates scored to secure a crucial 3-1 win in the race for fourth. The table looks that bit better for United. The mood is that bit improved.That’s the spirit of youth, that feels...
PREMIER LEAGUE・1 DAY AGO
San Diego Union-Tribune