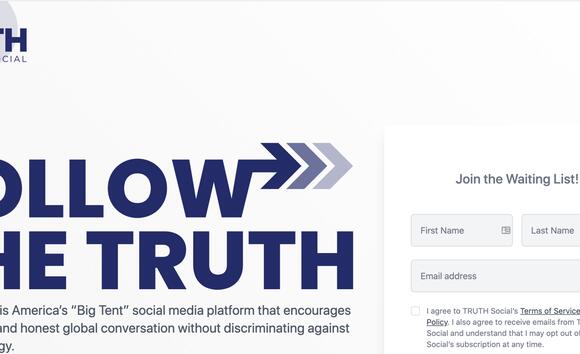 Trump's latest investment, the Trump Media & Technology Group, announced on Saturday that it has secured $1 billion in new investments as it takes steps toward becoming traded through a blank check company.

"$1 billion sends an important message to Big Tech that censorship and political discrimination must end," said Trump in a press statement . "America is ready for TRUTH Social, a platform that will not discriminate on the basis of political ideology. As our balance sheet expands, TMTG will be in a stronger position to fight back against the tyranny of Big Tech."

According to TMTG, the company has entered into "subscription agreements" with Digital World Acquisition Corps , which will transfer its funding to the company upon the "consummation of their business combination" from a "diverse group of institutional investors."

DWAC describes itself as a "blank check company." Blank check companies are publicly traded, developmental-stage companies that have not released an established business plan. Instead, they aim to gather funds as a start-up in hopes of merging with a separate business entity.

The press release did not identify the investors, an unusual action for these sorts of transactions, reports Axios .

Trump announced the creation of TMTG and its first product, the Truth Social network, in October, claiming it would "stand up to the tyranny of Big Tech."

Truth Social has come under scrutiny from coders and programmers. Within hours of the website's launch, hackers found a loophole that allowed them to troll the website and get screenshots of the Truth Social interface.

The website relies on Mastodon , an open-source social media platform used by websites like Gab. While anyone can use the software if the licensing is appropriately handled, Truth Social's decision to claim Mastodon's software as "proprietary property" of TMTG has led Mastodon's developers to threaten legal action in late October if TMTG does not operate according to the company's license.

As of December, no legal action has been taken by Mastodon, and TMTG has not amended its terms of service per Mastodon's request.

Economic growth so strong, the GOP is literally at a loss for words

NEW YORK (Reuters) – Fireblocks, a digital asset infrastructure provider, said on Thursday it raised $550 million from institutional investors, making it one of the largest financing rounds in the cryptocurrency sector in the last few years. The latest investment valued the company at $8 billion. The funding was...
MARKETS・1 DAY AGO
Sand Hills Express

The House select committee investigating the January 6 attack on the U.S Capitol is demanding four social media companies turn over internal records as it examines the spread of misinformation online and how violent extremists used social platforms to organize efforts to overthrow the 2020 election. The committee sent subpoenas...
CONGRESS & COURTS・14 DAYS AGO
The Guardian

Fresh out of office, Nunes opens up on Trump social media, election to replace him

Former Rep. Devin Nunes (R–Tulare) took to Valley airwaves on Thursday, speaking to KMJ’s Ray Appleton for an hour, his first opportunity since departing Congress to discuss the quick work to launch a social network under the Trump Media banner. For Nunes, the shift into the private sector...
PRESIDENTIAL ELECTION・14 DAYS AGO
USA TODAY

Former Vice President Mike Pence said Thursday it is clear that his successors, President Joe Biden and Vice President Kamala Harris are picking up where Barack Obama left off in fundamentally transforming the American system into one that is hard-left. Pence also reacted to Harris' trip to Honduras to visit...
PRESIDENTIAL ELECTION・15 HOURS AGO
NBC News

MOSCOW — Russia insisted on Friday that it will not start a war with Ukraine after President Joe Biden warned there is a “distinct possibility” that Moscow could invade its neighbor in February. As the West awaited the Kremlin's next move, Russian Foreign Minister Sergey Lavrov said...
POLITICS・7 HOURS AGO

China and US in race to salvage ‘flying computer’ fighter jet

The US army is racing to retrieve its sunken F-35C fighter jet that crashed in the disputed waters of the South China Sea during a “landing mishap” earlier this week.Experts say the US will face a major setback in the race between the world’s two superpowers if China finds the jet first.It was flying over the international waters, which Beijing claims as its own territory, when it crashed while attempting to land on the USS Carl Vinson on Monday.The US navy said in a statement on Tuesday that it occurred during “routine operations”, injuring seven sailors, including the pilot, who...
MILITARY・1 HOUR AGO
Popculture

2 Stimulus Checks This February? How It's a Real Possibility

After the Biden administration's Build Back Better legislation failed to pass the Senate, the Child Tax Credit payments that American families have been receiving were ended. Then it was proposed that citizens who are eligible could possibly receive two of the stimulus payments in February, which would make up for the lost payment from January. Now, it's been announced that families who received the Child Tax Credit payments can be paid the remainder of their money by making sure to note on their taxes the details sent to them in a letter from the IRS, which can be read up on here.
INCOME TAX・3 DAYS AGO
The Conversation U.S.

As tensions mount between Russia and the West over Ukraine, the threat of Russian cyberattacks against the U.S. increases. The Department of Homeland Security issued an intelligence bulletin on Jan. 23, 2022, warning that Russia has the capability to carry out a range of attacks, from denial-of-service attacks on websites to disrupting critical infrastructure like power grids. “We assess that Russia would consider initiating a cyber attack against the Homeland if it perceived a US or NATO response to a possible Russian invasion of Ukraine threatened its long-term national security,” the DHS stated in the bulletin, which it sent to law...
PUBLIC SAFETY・1 DAY AGO
KYW News Radio

There needs to be accountability for inequity of legislative maps Kudos to the Ohio Supreme Court for overturning the state legislature’s redistricting map.  The court ruled that this map unduly favored Republicans. The map was drawn by Republicans. ...
COLUMBUS, OH・18 MINUTES AGO
The Commercial Appeal

The threat of Russian military invasion of the remainder of Ukraine represents the most serious military crisis and challenge in Europe since the Balkan wars of the 1990s. The ongoing substantial buildup of Russian military forces around that nation continues, ominously. President Vladimir Putin of Russia continues to exploit the situation to increase...
POLITICS・15 MINUTES AGO
The Guardian

Adam Dell, the former head of product at Marcus Goldman Sachs, launched a new crypto and stocks platform to "empower investors of all levels of expertise to generate better outcomes through access to...
MARKETS・1 DAY AGO
HuffingtonPost

Tucker Carlson claimed Thursday that President Joe Biden’s promise to choose a Black woman for the next Supreme Court justice won’t take into account “intelligence” and other key factors. (Watch the video below.) The Fox News host has been apoplectic since the president confirmed he would...
U.S. POLITICS・3 HOURS AGO
TheStreet

The Biden administration is withdrawing its Covid-19 vaccination and testing rules for private businesses with 100 or more employees effective Wednesday following the U.S. Supreme Court’s Jan. 13 ruling that blocked the regulations. The U.S. Department of Labor's Occupational Safety and Health Administration on Tuesday said it is withdrawing...
PUBLIC HEALTH・2 DAYS AGO
Reuters

Jan 27 (Reuters) - Chief U.S. Circuit Judge Jeffrey Howard plans to step down from active service on the 1st U.S. Circuit Court of Appeals, creating a vacancy that would allow President Joe Biden to fill the Boston-based appellate court with all Democratic appointees. Howard, who was appointed to the...
CONGRESS & COURTS・1 DAY AGO
Wyoming News

Civil war expert reacts to Trump supporter. See her warning for the US

CNN's Donie O'Sullivan examines how lies about the 2020 election could undermine the future of American democracy.
ELECTIONS・2 DAYS AGO