On the surface, the stock market appears to be doing relatively well. The Nasdaq , S&P 500 , and Dow Jones Industrial Average indices are all down around 5% from their recent highs and are still up big for the year. Look closer, however, and it's clear that the prices of many smaller growth stocks, and even some top-tier companies , are hovering around 52-week lows.

Investors that follow the electric vehicle (EV) industry are probably wondering if the tech sell-off affects growth companies like Lucid Group (NASDAQ: LCID) and Nio (NYSE: NIO) . Here's a look at how each company could be impacted. 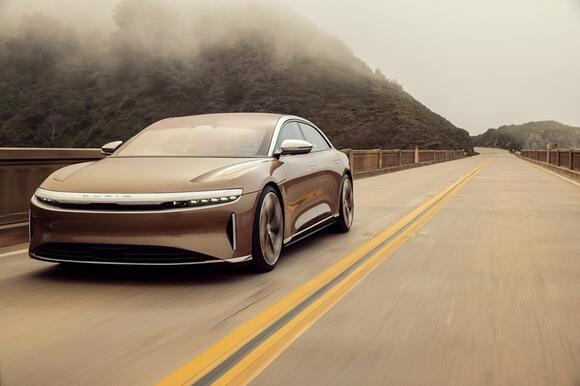 Lucid is no stranger to skepticism

Daniel Foelber (Lucid): It seems like a distant memory now, but it was only in August and September when share prices of Lucid were struggling to stay above $20 a share as early investors cashed out . The electric vehicle maker spent much of the summer fine-tuning its luxury sedan, the Lucid Air, but failed to mention the date everyone really cared about -- which was deliveries. This period was followed by the company's late September announcement that it had begun mass production , which was followed by its late October announcement that it had begun customer deliveries . These were major milestones that Lucid said it would hit in the second half of 2021 . And once it hit them, investors breathed a sigh of relief and gained confidence that Lucid is the real deal , even though its battery technology already showed it was .

In hindsight, the stock price volatility looks rather silly. But uncertainty is a tricky beast that can get the best of both imagination and fear.

What Lucid management did well this year, especially during its Q3 conference call , was set expectations. The company knows that its financial figures will appear paltry for a few years, so it's creating its own yardstick for the market to measure it on. For Lucid, that means setting goals for its cash position, reservations, number of showrooms and service centers, production, deliveries, and manufacturing capacity. Meeting and exceeding expectations in these performance indicators should be enough to keep Lucid's investment thesis alive. But if Lucid incurs delays or falls shot due to unforeseen headwinds, investors may not be so patient. In this vein, Lucid is playing its own game.

No one knows how a stock will move in the short term. But if Lucid continues to deliver on its promises in 2022, then the long-term investment thesis will look even better than it does today.

Heading into a transition year

Howard Smith (Nio): Equity investors can be jittery when news headlines are flying, leading to reactions that are based on bigger-picture assumptions resulting in sector-wide stock moves. Investors need to balance that against what might be due to company-specific information.

Share prices of Chinese EV maker Nio have dropped more than 15% over the past several weeks, and a deeper look seems to indicate the drop was due to a combination of both a sector shift and some short-term news from the company.

Fears of uncertainty surrounding the economic recovery from the pandemic and the potential spread of the new omicron variant impacted stocks in general in recent weeks. Fast-growing businesses in the tech sector typically get hit hardest when market jitters surface. Nio is one such business, and it has yet to report a profitable quarter . It makes sense that a general sell-off in highly valued stocks is going to include Nio.

But some company-specific fears were put to rest this week, giving investors a potential opportunity as Nio moves into what should be a transitional year for its business. Last month, Nio disappointed investors when it announced only 3,667 vehicle deliveries in October. That was a decrease of 27.5% year over year. Those results were in sharp contrast to the first nine months of 2021, which showed an increase of more than 150% in deliveries compared to the prior-year period.

But the company returned to that prior growth in November when it delivered a monthly record of 10,878 electric vehicles. The dip in October was mainly due to disruption caused by work to upgrade its manufacturing lines in preparation for both higher volumes and new products. Nio expects to deliver three new products in 2022, including the highly anticipated ET7 luxury sedan. It is also expanding its sales into Europe beginning in Norway, with plans to move into Germany next year. With that backdrop of upcoming growth for the company, investors focused on the long-term can use the recent sell-off to get Nio shares at a discount.

Patience and perseverance are paramount

Just like other growth stocks , Lucid and Nio are not impervious to volatility. Investors shouldn't expect either stock to go to the moon before each company establishes itself as a long-term market participant.

However, Lucid and Nio both have a lot going for them that should help investors weather the current market storm in case things go south over the short term. If Lucid accomplishes its 2022 goals, it would signal strong demand for its vehicles and mark a major milestone that a new U.S. automaker other than Tesla can compete in the ultra-competitive luxury sedan market. Similarly, Nio continues to prove its mettle against a stout Chinese cohort of competitors and is expanding nicely internationally. For most investors, taking a basket approach by diversifying into multiple EV stocks offers one of the best ways to combat volatility.

10 stocks we like better than Lucid Group, Inc.
When our award-winning analyst team has a stock tip, it can pay to listen. After all, the newsletter they have run for over a decade, Motley Fool Stock Advisor , has tripled the market.*

They just revealed what they believe are the ten best stocks for investors to buy right now... and Lucid Group, Inc. wasn't one of them! That's right -- they think these 10 stocks are even better buys.

Shiba Inu has fallen sharply, but there is still plenty of downside left.
STOCKS・2 HOURS AGO
Motley Fool

Procter & Gamble just posted another great quarter and is around its all-time high. Clorox’s short-term problems give investors a deal on this Dividend Aristocrat. Kinder Morgan is a quality high-yield option to boost passive income. The euphoria that helped the S&P 500 double between 2019 and the end...
STOCKS・1 DAY AGO

"This has been exactly how the great bubbles have broken," Jeremy Grantham said. "It's almost eerily classic."
STOCKS・1 DAY AGO
The Motley Fool

The e-commerce platform was on the receiving end of some negative commentary from Wall Street, but the news wasn't all bad.
STOCKS・18 HOURS AGO
The Motley Fool

These companies wouldn't be worth a second look, even in a less volatile market.
STOCKS・3 HOURS AGO

Another volatile week has some altcoins screaming "uncle."
STOCKS・19 HOURS AGO
The Motley Fool

Why Lucid Stock Dropped 10% This Morning

Lucid Group (NASDAQ:LCID) shares opened low and proceeded lower in early trading on the Nasdaq Stock Market Friday morning. By 9:45 a.m. ET, shares of the electric car start-up were down 9.7%. I think you can blame Tesla (NASDAQ:TSLA) for that. So what. Wednesday evening, as you've probably heard by...
STOCKS・22 HOURS AGO
Motley Fool

Why Lucid Stock Is Plummeting This Week

Shares of Lucid Group (NASDAQ:LCID) are down big this week amid a multitude of market pressures. The electric-vehicle (EV) stock had slid roughly 28% from last-week's market close as of 12:00 p.m. ET on Friday, according to data from S&P Global Market Intelligence. In addition to pressures from a potential...
STOCKS・20 HOURS AGO
Benzinga

What's Next For Nio Stock? A Technical Analysis

Investing in a volatile market is never easy; that's why long-term strategies tend to deliver the best results.
STOCKS・1 HOUR AGO
The Motley Fool

2021 was a strong year for several Buffett stocks. While past performance doesn't guarantee future returns, some Buffett stocks could rally even higher. Warren Buffett is known as one of the world's greatest investors, having built a net worth of nearly $110 billion solely on the back of his investing prowess. Not surprisingly, investors in stock markets often try to emulate Buffett's investing strategy and buy stocks that belong in the portfolio of the legendary investor's company, Berkshire Hathaway (NYSE:BRK.A)(NYSE:BRK.B).
STOCKS・1 DAY AGO
The Motley Fool

E-commerce has made industrial one of the hottest real estate subsectors today.
REAL ESTATE・2 HOURS AGO
The Motley Fool

How Earnings in Autonomous Technology May Shift by 2030

Take a closer look at the market potential for this massive opportunity.
TECHNOLOGY・3 HOURS AGO
The Motley Fool

The Biggest Industrial Trend Tesla and Others Are Following