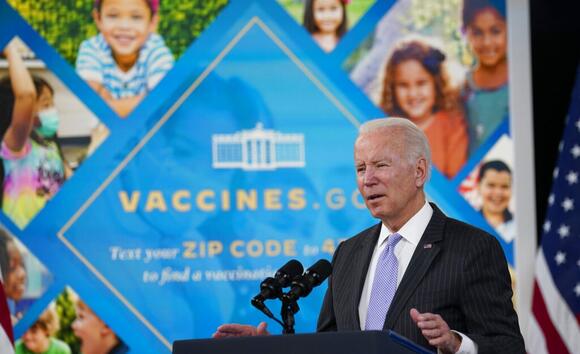 A fight to block the Biden administration’s COVID-19 vaccine mandates is far from over in the Senate even though lawmakers voted against a measure that would have stopped the mandate.

Senate Democrats late Thursday blocked a measure authored by Republican Sen. Roger Marshall of Kansas that would have prohibited federal funding from being used to implement or enforce vaccine mandates. The measure failed 50-48.

But Republicans aren’t giving up on efforts to stop President Joe Biden from implementing the mandate, which they say is unconstitutional, unfair, and will force people out of jobs.

Party lawmakers plan to bring up a resolution next week that would reverse the Biden administration’s new requirement that large businesses require employees to get vaccinated against COVID-19.

Biden announced the mandate in September. It requires anyone working for a company with 100 or more employees to get vaccinated against the virus by Jan. 4 or face a weekly COVID-19 testing requirement.

White House officials emphasized their commitment to the mandate in a statement Thursday outlining the steps Biden is taking to slow the winter spread of COVID-19 and the omicron variant, which is potentially more contagious.

“To protect this progress and to ensure workers stay safe and on the job, we have to slow the spread of COVID-19 in our workplaces and places of businesses,” White House officials said in a statement. “Vaccination requirements do just that.”

Congressional Republicans almost uniformly oppose the requirement even though most of them are vaccinated and publicly encourage the public to get the shot.

“The answer to someone not agreeing with your medical advice is not to fire you, and it sure as heck isn’t to have the president of the United States fine every employer in America that doesn’t want to do this whether they have religious objections or otherwise,” Utah Sen. Mike Lee, who has led GOP opposition to the vaccine, said Thursday.

Special rules allow Republicans to bring up the resolution and pass it with 51 votes instead of the usual 60 votes.

The GOP controls 50 votes, and Sen. Joe Manchin, a West Virginia Democrat, plans to vote with Republicans, which means if all GOP lawmakers support ending the mandate, the resolution will pass.

“I do not support any government vaccine mandate on private businesses,” Manchin said in a statement. “That’s why I have cosponsored and will strongly support a bill to overturn the federal government vaccine mandate for private businesses. I have long said we should incentivize, not penalize, private employers whose responsibility it is to protect their employees from COVID-19. I have personally had both vaccine doses and a booster shot and I continue to urge every West Virginian to get vaccinated themselves.”

Republicans introduced the measure under the Congressional Review Act, which allows Congress to overturn rules implemented by federal agencies.

The vaccine mandate has been slowed by court challenges, and the Biden administration has suspended the requirement for private businesses.

But Republicans are determined to codify a ban on vaccine mandates and to bring up other legislation that would block implementation.

In addition to the Congressional Review Act resolution, lawmakers have introduced other legislation aimed at circumventing Biden.

Marshall and a group of GOP lawmakers introduced legislation that would prevent the Department of Defense from giving service members a dishonorable discharge for refusing the vaccine.

The House Armed Services Committee recently passed similar language led by Rep. Mark Green, a Tennessee Republican, in an amendment to the FY2022 National Defense Authorization Act that is now under consideration in the Senate.

“It’s an insult to our servicemen and women who have served with honor to dishonorably discharge them for refusing the COVID vaccine,” Marshall said. “It is the same way we dishonorably discharge those convicted of serious crimes such as treason, desertion, sexual assault, and murder. Forcing all service members, including pregnant women and those who have already had COVID-19, to receive the vaccine is just one more example of President Biden and his administration putting politics ahead of science.”

The White House opposes the provision, arguing in a position statement it would “detract from readiness and limit a commander’s options for enforcing good order and discipline when a Service member fails to obey a lawful order to receive a vaccination.”

Democrats have criticized and mocked the GOP over their efforts to undo the mandate, labeling them “anti-vaxxers” and arguing they are working against eliminating COVID-19.

If the Senate is able to pass the resolution reversing the mandates, it would require the unlikely approval of both the Democratic-led House and Biden.

“It's a defiance of science and public health,” Pelosi said Thursday. “And that's what we're up against.”

Judge in GA just ruled that vaccinations for Federal Contractors and their employees are illegal. Same as Kentucky Ruling.

Mitt Romney: Biden has had '52 weeks of bad weeks'

Facing setbacks on a slew of administration policy promises, the White House told reporters Tuesday, Wednesday, and Thursday that President Joe Biden and his administration could “do hard things."
PRESIDENTIAL ELECTION・1 DAY AGO
The Independent

Republican senators rallied to the defence of Sen Mike Rounds this week after he was attacked by former President Donald Trump.Mr Rounds sparked a feud with the former president when he went on ABC’s This Week on Sunday and reiterated that he did not believe conspiracy theories supported by Mr Trump and his allies about the 2020 election, namely the assertion that Mr Trump had in fact won the election."We simply did not win the election, as Republicans, for the presidency,” Mr Rounds said on Sunday.“[I]f we simply look back and tell our people don't vote because there's cheating going...
PRESIDENTIAL ELECTION・7 HOURS AGO

Representative Adriano Espaillat said "much must be done to push these two senators to line up and be in lock-step with our leadership."
CONGRESS & COURTS・1 DAY AGO
Business Insider

"Things are not going well," Romney said of Biden's tenure. "And the president needs to stop and reset and say what is it he's trying to accomplish?"
UTAH STATE・4 HOURS AGO
The Independent

Hillary Clinton has invoked Martin Luther King Jr’s criticisms of “the white moderate “ in what appeared to be a thinly- veiled rebuke of Democrats Joe Manchin and Kyrsten Sinema after they rejected President Joe Biden’s urgent demands to change Senate filibuster rules that block passage of federal voting rights legislation.In a message on Twitter, the former Democratic presidential candidate quoted the late civil rights leader’s “Letter from a Birmingham Jail,” in which he rebuts “unjust laws” as well as “the white moderate” with a “shallow understanding” of injustice.“I had hoped that the white moderate would understand that law...
CONGRESS & COURTS・1 DAY AGO
Texoma's Homepage

Democrats have been trying to push forward voting rights legislation that Senate Republicans have been stalling through a filibuster.
CONGRESS & COURTS・2 DAYS AGO

Recent polls show between 57 and 60 percent of West Virginians approve of the moderate Democratic senator, despite Trump winning there by a double-digit margin.
PRESIDENTIAL ELECTION・2 DAYS AGO
The Independent

Senator Michael Bennet hardly looks like anyone’s idea of a progressive hero. The Colorado Democrat often uses his husky voice to discuss wonky topics like why Democrats should not lift the cap on state and local tax deductions that Republicans put in place with the Trump tax cuts, and sounds like the former superintendent of Denver Public Schools he once was.“Well, look, I don’t think the American people sent us to Washington to cut taxes for rich people,” he told The Independent in an interview. “And the reality is we’ve had since 2001 about $8 trillion in tax cuts, almost...
CONGRESS & COURTS・1 DAY AGO
Fox News

Biden 'disrespecting Americans' by claiming they're racist 'if he doesn't get his way': Sen. Lee

President Joe Biden is the embodiment of a historic "low point" in the presidency of the United States, as he accuses his fellow Americans of being racist simply because they disagree with his partisan policies, Senate Judiciary Committee member Mike Lee, R-Utah, said. Lee joined "The Mark Levin Show on...
CONGRESS & COURTS・2 DAYS AGO
The Guardian

His poll numbers continue to languish, though 45 percent of all voters said they "feel better" about him than they did about Trump.
PRESIDENTIAL ELECTION・9 HOURS AGO
The Independent

Former President Donald Trump is stepping up his election-year effort to dominate the Republican Party with a Saturday rally in Arizona in which he plans to castigate anyone who dares to question his lie that the 2020 presidential election was stolen, likely including the state’s GOP governor, Doug Ducey.But 2,000 miles to the east in Washington, there are small signs that some Republicans are tiring of the charade. Mike Rounds, the generally unassuming senator from South Dakota, was perhaps the boldest in acknowledging the reality that the election was in fact fair. Instead of being shunned, he was supported...
PRESIDENTIAL ELECTION・1 DAY AGO
Newsweek

"If we do not protect the vote with everything that we've got, we will not have a country to protect going forward," the House majority whip said Sunday.
CONGRESS & COURTS・3 HOURS AGO
POLITICO

Last year, President Joe Biden launched an unprecedented assault on Americans’ constitutional liberties by imposing unlawful COVID-19 vaccine mandates on. millions of individuals. Our office sprang into action, filing the first-in-the-nation lawsuit against the mandates for contractors and federal employees, and co-leading two other challenges against the mandates for private businesses and health care workers.
CONGRESS & COURTS・2 DAYS AGO
NBC News

Sen. Kyrsten Sinema's filibuster speech has reenergized progressive efforts to find someone to primary and oust the Arizona Democrat

Grassroots groups in Arizona are working feverishly to find someone to challenge and unseat Democrat Kyrsten Sinema over her blockage of Biden's agenda and objection to nixing the filibuster. They saw a fundraising boost after her floor speech.
ARIZONA STATE・2 DAYS AGO
Daily Mail

Republican Senator Mitt Romney tore into President Joe Biden and Democrats trying to pass federal voting rights legislation on Tuesday night, accusing them of undermining the 'reliability' of American elections in the process. The 2012 presidential candidate declared Biden was taking the same 'tragic road' as his predecessor Donald Trump...
PRESIDENTIAL ELECTION・4 DAYS AGO