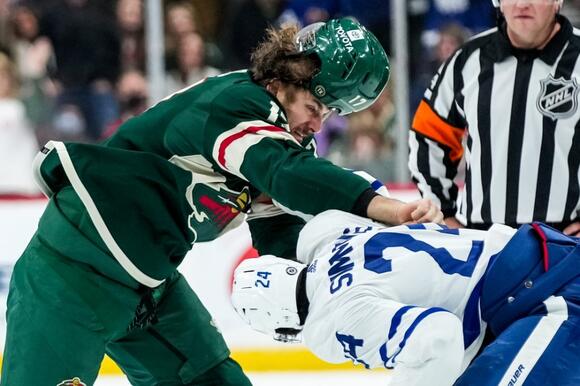 Kirill Kaprisov scored the decisive goal in a shootout and the Minnesota Wild defeated the Toronto Maple Leafs 4-3 Saturday night in Saint Paul, Minn., to extend their winning streak to six games.

The Maple Leafs, who overcame a 3-0 deficit to tie the game in the second period, saw their seven-game road winning streak, which matched a club record, come to an end. They also had an overall five-game winning streak snapped.

Toronto had a power play for the final 59 seconds of overtime when Jonas Brodin was called for slashing.

Jason Spezza had two goals and an assist for Toronto. Auston Matthews had a goal and an assist. Morgan Rielly had three assists.

Greenway scored his second goal of the season at 19:36 of the first period. Matt Dumba’s shot deflected off Eriksson Ek, squeezed past Campbell, hit the post and slid out to Greenway.

Zuccarello scored his seventh goal on a power play at 5:21 of the second when his shot deflected in off the skate of Toronto defenseman Justin Holl. Ondrej Kase was off for tripping.

Foligno scored his 10th at 8:07 from the left circle after the puck bounced to him off an official.

Spezza scored at 12:47 on a shot from behind the goal line that deflected off a defender’s skate and went in after bouncing off the back of Talbot’s helmet. 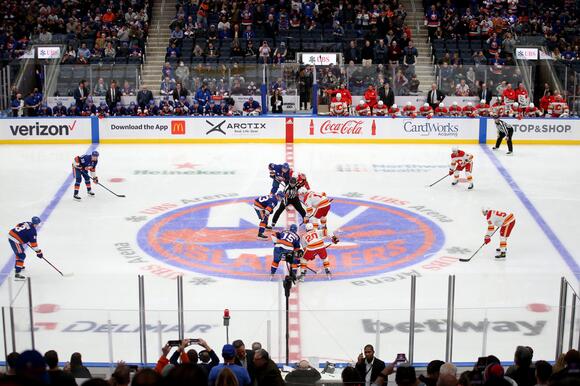 Spezza’s seventh of the season came from the slot on a power play at 17:51 of the second. Jordie Benn was off for roughing.

Matthews tied the game with his 14th of the season, tapping in Spezza’s pass on a power play at 19:10. Alex Goligoski was off for tripping.

Campbell was strong as Minnesota failed to score with a five-on-three advantage for nearly two minutes early in the third period. Campbell made two big saves in the final seconds of the third and Foligno crashed into him on one chance.

Toronto’s Mitchell Marner did not play after being involved in a collision with Jake Muzzin during a drill at practice on Friday.

The NHL season officially started back on October 12. In this article, we track all the NHL games today as
NFL・21 HOURS AGO
Sportsnaut

Vegas Golden Knights winger Reilly Smith is one of the hottest names leading up to the NHL trade deadline. With
NHL・1 DAY AGO
93.7 The Fan

He said it initially it was a head-shot and after having time to watch it, Pens head coach Mike Sullivan questions why the league won’t punish the hit on Teddy Blueger
NHL・15 HOURS AGO

Now that the 2021-22 season is about half of the way through, and Covid is ravaging many clubs, it’s time
NHL・14 HOURS AGO
Itemlive.com

This past week, the Boston Bruins honored Willie O’Ree by retiring his No. 22 and lifting it high into the TD Garden rafters. But that is not enough. O’Ree was The post Minton: The NHL needs to retire Bruins legend Willie O’Ree’s number appeared first on Itemlive.
NHL・1 DAY AGO
FanSided

The Pittsburgh Penguins are surging at the season's halfway point, but head coach Mike Sullivan says there is more work to be done
NHL・1 DAY AGO
Sportsnet.ca

As the season — and tempers — heat up, so do the questions. Great variety was found when we cracked open the first Toronto Maple Leafs mailbag of 2022. Yes, even though the franchise has burst out to arguably its best first half in history, fans are fixated on the tinkering that can make the lineup even better. And what might transpire if it doesn’t.
NHL・1 DAY AGO

NEW YORK (AP) — Adam Fox scored the deciding goal in the sixth round of a shootout and the New York Rangers beat the Los Angeles Kings 3-2 on Monday night for their ninth win in 12 games. Chris Kreider got his NHL-leading 30th goal, Barclay Goodrow also scored and Artemi Panarin had two assists as New York won its fifth straight at home. Igor Shesterkin stopped 28 shots to pick up his 20th win of the season. Blake Lizotte and Alex Iafallo scored in the second period for Los Angeles. Jonathan Quick stopped 34 shots as the Kings lost for the...
NHL・1 DAY AGO
FanSided

BOSTON (CBS) — The Bruins will be a little shorthanded along the blue line as they wrap up a seven-game homestand. Defenseman Matt Grzelcyk will be sidelined on Monday night when the B’s welcome the Anaheim Ducks to TD Garden. Grzelcyk briefly left Saturday’s win over the Jets after being sent into the boards by Winnipeg’s Pierre-Luc Duboius in the first period. He did return to the game and finished with 13:35 of ice time, and was credited with an assist on David Pastrnak’s game-winning goal in the third period. Head coach Bruce Cassidy was cautiously optimistic that Grzelcyk avoided a serious...
NHL・1 DAY AGO
mapleleafshotstove.com

Barry Trotz’s Islanders played their game, clogging up the slot in the defensive zone and finishing every single check in the offensive zone, much to the delight of their home crowd. Sheldon Keefe’s Leafs responded by playing their game: dominating puck possession with crisp passing, smooth transitions through the...
NHL・2 DAYS AGO

Matthew Tkachuk had a career-high five assists, Johnny Gaudreau had a goal and three assists, and the Calgary Flames routed the St. Louis Blues 7-1
NHL・1 DAY AGO
93.7 The Fan

It’s the worst team in the Western Conference & even though they’ve played better of late, can the Pens keep their focus tonight against Phil Kessel and mates
NHL・11 HOURS AGO
San Diego Union-Tribune

Justin Faulk had a goal and an assist and the St. Louis Blues beat the undermanned Vancouver Canucks 3-1
NHL・2 DAYS AGO