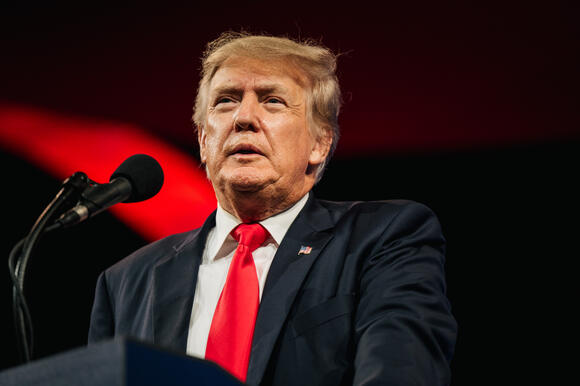 Donald Trump raised several eyebrows with a double negative in a recent statement—which read as him taking aim at those supporting his ongoing election fraud claims.

The statement from the former president, shared via email on Saturday, read: "Anybody that doesn't think there wasn't massive election fraud in the 2020 Presidential Election is either very stupid or very corrupt."

Trump's comments were met with sarcastic tweets from several of his detractors, who were keen to point out the double negative read as him taking aim at those who supported his repeated fraud claims.

George Conway, founding member of the anti-Trump group The Lincoln Project, which he has since departed, appeared to relish pointing out the grammatical error at Trump's expense.

Conway then followed up his tweet with a double-negative-ridden comment of his own, which read: "Seriously, I usually don't find it unsurprising when he says something that's not inaccurate, but no one—not even the former guy—can be not correct all the time."

Jon Cooper, former Long Island campaign chair for Barack Obama tweeted: "Somebody should explain to Donald Trump what a double negative is."

Following the outcome of the 2020 Presidential election, Trump has incessantly claimed that irregularities and widespread voter fraud were the reasons for his loss. There is not evidence of irregularities on a scale which would have altered the election outcome.

Last month, the former President said in a bullish statement the "fake news media" had demeaned what he called "the real results" and offered to debate people about the election fraud claims .

Despite county-wide audits being ordered across the U.S., there has been no evidence to support claims of widespread voter fraud being the reason behind eventual winner Joe Biden 's victory.

Sitting Republican lawmakers have, however, continued to support Trump's unfounded claims and have since been rewarded with the former President's endorsements for their loyalty.

Several Republican lawmakers also shared their views on the unfounded claims at a QAnon convention earlier this year.

Other Republicans have pushed against the former President's claims, with former New Jersey Governor Chris Christie having suggested they were "fantasies."

The situation has seen a split in the party, between those who continue to support Trump's statements and those who have pushed against his claims.

AGOLF TWITLER supporters are the poorest, uneducated people, and thought " I want to vote for someone that understands us hard working people ,you know what,that billionaire that was given his wealth, and swindles other of money is perfect" 🐓🍭s

Wow are they still going on about that, even people who worked for him said there was no proof of election fraud maybe he should take up knitting or crocheting or something else to get his mind off of stuff that isn't true he needs to put his big boy pants on concede to the results and move on.

bone spur been preaching election fraud before we even voted...he was planting the seed in the trumpturds heads.. now pres biden is president and still going on with his BIG LIE...this man is a MENECE TO SOCIETY and needs to be in PRISON.

Republican senators rallied to the defence of Sen Mike Rounds this week after he was attacked by former President Donald Trump.Mr Rounds sparked a feud with the former president when he went on ABC’s This Week on Sunday and reiterated that he did not believe conspiracy theories supported by Mr Trump and his allies about the 2020 election, namely the assertion that Mr Trump had in fact won the election."We simply did not win the election, as Republicans, for the presidency,” Mr Rounds said on Sunday.“[I]f we simply look back and tell our people don't vote because there's cheating going...
PRESIDENTIAL ELECTION・9 HOURS AGO
Newsweek

Former president Trump said that President Biden had made Dr. Anthony Fauci "like a king" during comments to supporters.
ARIZONA STATE・15 HOURS AGO
Newsweek

The MyPillow founder made the remarks at Trump's Arizona rally, where many speakers touted conspiracy theories about the 2020 election.
PRESIDENTIAL ELECTION・10 HOURS AGO
Newsweek

Recent polls show between 57 and 60 percent of West Virginians approve of the moderate Democratic senator, despite Trump winning there by a double-digit margin.
PRESIDENTIAL ELECTION・2 DAYS AGO

Mitt Romney made the comment Sunday after Lindsey Graham said he'd only back McConnell if he mends his relationship with Trump.
PRESIDENTIAL ELECTION・9 HOURS AGO
Washington Post

The Biden White House has forced the resignation of a Trump-appointed member of a U.S. commission who has promoted the baseless claim that the FBI planted agents among the pro-Trump mob that stormed the Capitol on Jan. 6. Darren Beattie was named by former president Donald Trump to the U.S....
PRESIDENTIAL ELECTION・2 DAYS AGO
Fox News

"100 Seats, 100 Years," he added on Gettr, referring to the century of political domination he argues will begin with the midterms.
ARIZONA STATE・12 HOURS AGO

Jonathan Riches has been to 40 Donald Trump rallies and fervently believes the last US presidential election was stolen. Like thousands of others who spent hours in a dusty field in Arizona this weekend to watch the former president speak, that belief is a bedrock -- no matter how much the Republican Party leadership wishes otherwise. "We love our president. I call him President Trump because I still consider him my president," Riches, 44, told AFP. Riches was among fellow believers in Florence, 60 miles (100 kilometers) outside Phoenix for Saturday's rally.
ARIZONA STATE・8 HOURS AGO
Newsweek

The House minority leader mocked the idea that Democrats would consider a presidential candidate "the country has rejected."
PRESIDENTIAL ELECTION・3 DAYS AGO
Newsweek

Trump Claims White People 'at the Back of the Line' for COVID Vaccines, Treatments

"The left is now rationing life-saving therapeutics based on race," Trump said during a rally in Arizona this weekend.
POTUS・3 HOURS AGO

Former President Donald Trump is stepping up his election-year effort to dominate the Republican Party with a Saturday rally in Arizona in which he plans to castigate anyone who dares to question his lie that the 2020 presidential election was stolen, likely including the state’s GOP governor, Doug Ducey.But 2,000 miles to the east in Washington, there are small signs that some Republicans are tiring of the charade. Mike Rounds, the generally unassuming senator from South Dakota, was perhaps the boldest in acknowledging the reality that the election was in fact fair. Instead of being shunned, he was supported...
PRESIDENTIAL ELECTION・1 DAY AGO
Newsweek

Economist Confronts Sean Hannity on Energy Production Claims: 'You're All Over the Map'

Austan Goolsbee denied one assertion after another as the Fox News host attacked the Biden admin's energy policies on his Friday show.
ENERGY INDUSTRY・1 DAY AGO
POLITICO

There is friction among Republicans between those supporting Trump's election fraud claims, and those who believe the former president should move on.
PRESIDENTIAL ELECTION・2 DAYS AGO

"Soleimani's murderer and the one who gave the order will pay the price," the video stated.
POTUS・3 DAYS AGO
Newsweek

The Department of Justice Thursday charged eleven members of the far-right group with seditious conspiracy.
POTUS・3 DAYS AGO