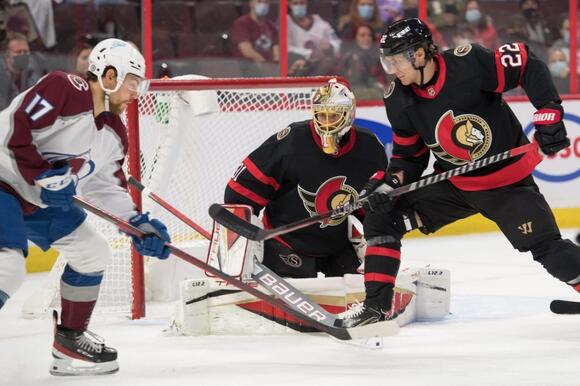 Gabriel Landeskog, Devon Toews and Alex Newhook had a goal and an assist each, Tyson Jost and Darren Helm also scored and Nathan MacKinnon had three assists for the Avalanche.

Jonas Johansson stopped 11 of 15 shots before he was replaced by Justus Annunen in the second period. Annunen had 17 saves in his NHL debut.

The Avalanche played without Cale Makar and Nazem Kadri due to injuries.

Tkachuk won it when he broke in on Annunen and beat him with a wrister. It was his seventh of the season.

Helm gave Colorado a 1-0 lead 1:26 into the game, his third of the season. Ottawa responded with two goals in a span of 29 seconds. 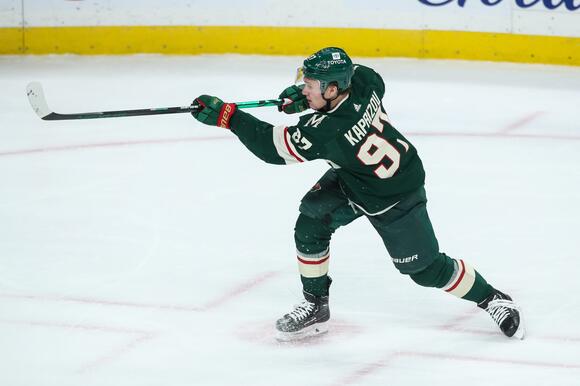 Landeskog’s eighth goal at 8:19 of the first tied it.

Stutzle made it 3-2 just 1:13 into the period when he was awarded a goal despite sliding into the net after being taken down by Jack Johnson. The puck went across the goal line after they crashed into Johansson, and the officials called it a good goal.

Newhook made it 5-3 with his fourth goal at 9:36 of the second and Jost scored 1:52 into the third period, his third of the season.

The Avalanche had a goal overturned by video review at 17:14 of the third but Toews did tie it at 18:40 with Annunen off for an extra skater. It was his fourth of the season.

Krystof Hrabik of the AHL’s San Jose Barracuda was suspended 30 games for directing a racist gesture at Tucson Roadrunners forward Boko Imama, who is a Canadian of Congolese descent.
NHL・14 HOURS AGO
CBS Boston

BOSTON (CBS) — Brad Marchand is a man of the people — and one funny guy. The Bruins forward had some fun with a Boston fan ahead of Thursday night’s game against the Capitals, in a way that only Brad Marchand could. As he made his way off the ice following pregame warmups, Marchand started giving out his usual high-fives and fist bumps to the fans there to greet him. One young fan was recording it on his phone, which is when Marchand decided to have his fun. He snagged the phone as he walked through the tunnel and recorded a rather...
NHL・22 HOURS AGO
WFAN Sports Radio

Islanders veteran Zdeno Chara dropped Flyers defenseman Zack McEwan with an uppercut to the face, then made sure to check if his opponent was OK.
NHL・2 DAYS AGO
USA TODAY

The NHL season officially started back on October 12. In this article, we track all the NHL games today as
NFL・1 DAY AGO
97.1 The Ticket

Where Raymond goes from here is up to him. He has the inside track for the Calder, and he’s on the path toward a long and successful career in Detroit.
NHL・2 DAYS AGO
97.1 The Ticket

At 5’10, Smith doesn’t boast the size of his 6’2 younger brother, but he does have a more proven offensive track record. He also plays center.
NHL・2 DAYS AGO
WEEI Sports Radio

The Detroit Red Wings have the dates for their pandemic postponed games. The NHL released dates for the more than 100 games that, halfway through the season, have had to be postponed because of COVID-19. The Wings were so hard hit by the virus they shut down days ahead of the Christmas schedule,...
NHL・2 DAYS AGO
Sportsnaut

As the Philadelphia Flyers sit near the bottom of the NHL standings, captain Claude Giroux is one of the hottest
NHL・14 HOURS AGO
Sportsnaut

The NHL levied $5,000 fines against Montreal’s Jonathan Drouin and Phillip Danault of the Los Angeles Kings on Wednesday, the
NHL・2 DAYS AGO
CBS Boston

BOSTON (CBS) — The Bruins earned a spirited 4-3 win over the Washington Capitals on Thursday night, but it may have come at a cost. Brad Marchand had to leave the game in the second period after taking a hit from behind by Washington’s Garnet Hathaway, which head coach Bruce Cassidy called a “cheap hit.” Marchand suffered an upper-body injury on the play, which occurred a little more than halfway through the second period. The Bruins winger went into the corner to play the puck, and Hathaway lined him up and delivered a crushing blow right between the numbers, sending Marchand...
NHL・23 HOURS AGO

After taking down the Maple Leafs and reclaiming first place in the Metropolitan Division, Ryan Reaves says the Rangers are among the NHL’s elite: ‘The standings don’t lie.’
NHL・1 DAY AGO
Sportsnaut

The Montreal Canadiens have added even more local representation to its leadership. New Habs general manager and Middlebury alum Kent Hughes was formally introduced to the media at the Bell Centre on Wednesday afternoon, addressing reporters in both French and English. Hughes becomes the 18th GM in Montreal history, and spent the previous 25 as […]
NHL・2 DAYS AGO
WGR550

The Dallas Stars used four power play goals, including two in the third period, to defeat the Buffalo Sabres 5-4 on Thursday night at KeyBank Center.
NHL・1 DAY AGO
The Southern Maryland Chronicle

The NHL will play 95 games from Feb. 7-22 as part of a comprehensive update to the 2021-22 regular-season schedule announced Wednesday. The update would allow all 32 teams to complete their 82-game schedule by the season’s original end date of April 29. The three-week window in February was previously designated as a pause in […] The post NHL announces extensive updates to 2021-22 regular-season schedule appeared first on The Southern Maryland Chronicle.
NHL・1 DAY AGO
cbslocal.com

The NHL has rescheduled the Colorado Avalanche games that were postponed last month due to COVID cases. All of the games will begin next month.
NHL・2 DAYS AGO
WKBN

Evgeni Malkin and Sidney Crosby scored, and the streaking Pittsburgh Penguins held off the Ottawa Senators 6-4.
NHL・1 DAY AGO