Sabres caught in a Hurricane 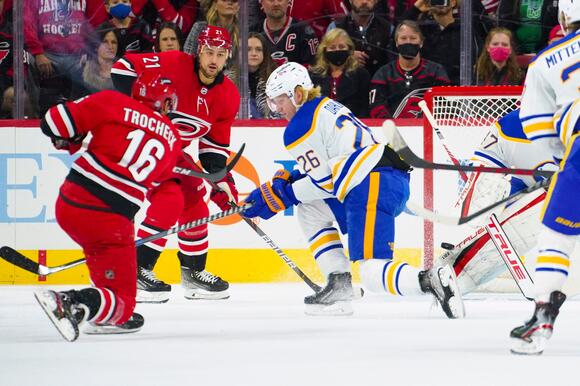 In the first meeting between the Buffalo Sabres and Carolina Hurricanes since Nov. 14, 2019, it was all home team inside PNC Arena in Raleigh, North Carolina. The Hurricanes never trailed on Saturday night, rolling over the Sabres to the tune of a 6-2 final.

The Hurricanes grabbed a very early lead on home ice. With the game just 2:16 old, forward Teuvo Teravainen netted his fifth goal of the season against newly-acquired goaltender Malcolm Subban. Subban came over from the Chicago Blackhawks in a trade on Thursday afternoon.

Despite the glimmer of optimism after Girgensons cut the deficit to three, it all was taken away just 69-seconds into the third period of play. Rasmus Dahlin fumbled a pass at the Carolina blue line, and there on the spot was forward Sebastian Aho for a short-handed breakaway. Though he was stopped by Subban, Teravainen was not. He followed up the chance and cashed in on a pass from Aho, who was able to corral his own rebound as no Sabres were back to come to the aid of Subban.

Teravainen's short-handed marker capped the scoring in this one, as Carolina was able to easily cruise the rest of the way to the 6-2 win over the Sabres.

Sabres Week In Review: Youth shines in this past week for Buffalo

Okposo is saddened by yet another racist incident in hockey

Okposo has become a Bills fan since he lives here year round. He said they were going crazy during the game, “The last three minutes we’re cheering and then down and back up again and then down and it was hard to see the result.
NHL・20 HOURS AGO
WGR550

Rasmus Ristolainen made his return to Buffalo on Saturday for his first career game against the Sabres. Paul Hamilton has more on his return, plus some postgame thoughts on Buffalo’s 6-3 win over the Flyers:
NHL・2 DAYS AGO

The Buffalo Sabres welcomed the Philadelphia Flyers to Key Bank Center in a matinee matchup. This is the first meeting between these two teams this year along with it being the first time Rasmus Ristolainen has been back to Buffalo since being traded
NHL・2 DAYS AGO