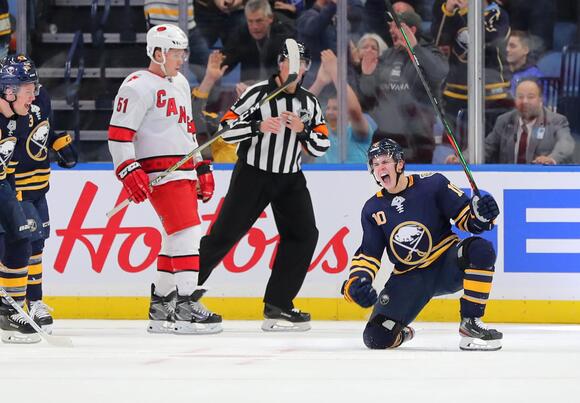 It's the first meeting between the Buffalo Sabres and Carolina Hurricanes since Nov. 14, 2019. On that night, Carolina emerged victorious in overtime, 5-4, inside KeyBank Center. Tonight, Buffalo debuts a new goaltender - Malcolm Subban, acquired Thursday from the Chicago Blackhawks, gets the nod between the pipes.

Game Preview | 5 things to know ahead of Sabres at Senators

OTTAWA - Casey Mittelstadt and Zemgus Girgensons will return to the lineup for the Sabres against the Ottawa Senators at Canadian Tire Centre on Tuesday. Mittelstadt has appeared in four games this season. He sustained an upper-body injury during the season opener against Montreal, returned for three contests in December, and then had surgery to repair the issue on Dec. 10.
NHL・1 DAY AGO
FingerLakes1.com

Just three days after scoring six goals against the Philadelphia Flyers, the Buffalo Sabres (13-22-7) couldn’t get anything going offensively as they fell 5-0 to the Ottawa Senators (13-20-3) 0n Tuesday. Buffalo was unable to beat goaltender Matt Murray, who made 32 saves. Aaron Dell stopped 42 shots for...
NHL・15 HOURS AGO
NHL

Dell of course was frustrated because three goals had just been scored by Ottawa in 2:55. Dell said, “I was trying to buy some time for my defenseman and I stepped into his lane. I hope he’s all right as I wasn’t trying to hurt anybody.”
NHL・16 HOURS AGO

Now that the 2021-22 season is about half of the way through, and Covid is ravaging many clubs, it’s time
NHL・1 DAY AGO
San Diego Union-Tribune

The Pittsburgh Penguins are proving that it’s never wise to count them out. Not in games. Not in the chase
NHL・2 DAYS AGO
Itemlive.com

This past week, the Boston Bruins honored Willie O’Ree by retiring his No. 22 and lifting it high into the TD Garden rafters. But that is not enough. O’Ree was The post Minton: The NHL needs to retire Bruins legend Willie O’Ree’s number appeared first on Itemlive.
NHL・1 DAY AGO
WGR550

Senators furious over hit on Drake Batherson by Aaron Dell

Dell of course was frustrated because three goals had just been scored by Ottawa in 2:55. Dell said, “I was trying to buy some time for my defenseman and I stepped into his lane. I hope he’s all right as I wasn’t trying to hurt anybody.”
NHL・16 HOURS AGO

Mason Marchment scored twice and added an assist, Carter Verhaeghe netted the go-ahead goal in the second period and the
NHL・16 HOURS AGO
WFAN Sports Radio

WATCH: Devils former first-round pick Mike McLeod was dropped to the ice by Dallas’ Luke Glendening in a lopsided fight at The Rock on Tuesday night.
NHL・3 HOURS AGO
San Diego Union-Tribune

Matthew Tkachuk had a career-high five assists, Johnny Gaudreau had a goal and three assists, and the Calgary Flames routed the St. Louis Blues 7-1
NHL・1 DAY AGO
KXRM

Senators left wing Tyler Ennis scored his second career hat trick in Tuesday’s win over Buffalo (his former team), but only one hat was thrown onto the ice with no fans in attendance at the Canadian Tire Centre in Ottawa.
NHL・49 MINUTES AGO